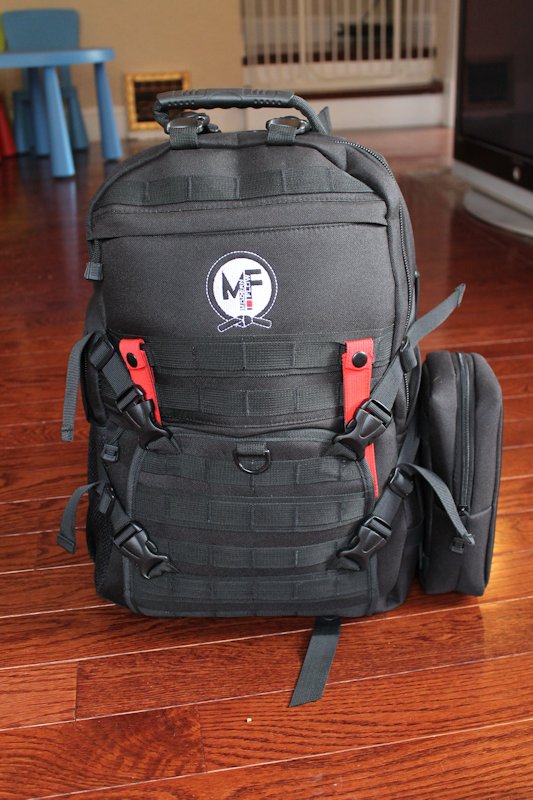 Intro:
As most of you have realized by now I have an obsession with gear: shorts, shirts, kimonos, pants, supplements, anything at all.  You name it and I’ve tried it or know someone who has.  Shortly after I was introduced to the Ranger gi by Modern Flow I realized that they also have a cool new backpack. As an owner of Origin’s Mundial backpack I wanted to give this one a try and see how they compared.

A very cursory look is all that’s needed to see that this backpack is built to take abuse.  If you’re familiar with packs used in hiking or high-end messenger bags you’ll recognize a lot of the same features.  There are compression straps all over the place, an extra side compartment and extra red webbing.  The pack has padded shoulder straps, a sternum strap and padded waist straps all to make it more comfortable with heavy loads.

Technical Specs/Construction:
The pack is 3,100 cubic inches, constructed of 1050 denier Kodra (apparently this stuff is bulletproof) and has two main compartments.  The front compartment is intended for your gi and miscellaneous training gear.  Within this compartment there is another mesh compartment for smaller items that I usually use for tape and whatever happens to be in my pockets when I train.  The other major compartment is at the back.  It is not as deep as the front pocket and intended for your laptop, iPad, books, etc… I’ve used it for those things as well as rashguards, shorts and even a lightweight gi.  This compartment is segregated into two sections one of which has extra padding and a Velcro closure, this is where I put my computer or iPad.

There is also a removable MOLLE attachment that is placed on the side of the bag.  This medium sized pocket is perfect for your belt, mouthpiece and other small items.  There are 5 smaller compartments interspersed around the pack for various items.  These compartments work to help organize small gear and items.  There is also pocket specifically for phones that I use pretty regularly.

Finally a word about the straps, there are a lot of them.  These straps have several functions one of which is as an outside strap down pocket that works very well for wet gear and/or sandals.  The other straps are highly adjustable so that you can get the exact fit you’re looking for and they can be used as compression straps.  The compression straps come in especially handy when you’re using the back as a carry-on.  The straps are all sewn over so that they will not fray at the ends.

Test Run:
This pack has a lot more in common with internal frame daypacks than most backpacks that I’ve seen at tournaments and around the gym.  The compression straps and add-ons could be a little overwhelming at first and there’s a lot to adjust to get it just right.  The two main compartments would be too small for large gear, such as shin pads or headgear.  The only other bad thing that I can say is that some of the fasteners came off because they weren’t snapped together completely.  In all the cases I was able to fix it with about a minute’s effort but it was still annoying.

All of that being said if you take the time to adjust the pack to fit you, familiarize yourself with the layout and features of the pack you’ll find that it is very versatile.  I’ve gotten 3 gis, 1 rashguard, shorts, a laptop, magazine, diapers, wipes, tape, belt and other miscellaneous gear into it without any problems.  I’ve also used it for weekend trips as my luggage and have no doubt that if I were to go hiking for the weekend this pack would work very well.  The sternum strap is great for small to medium loads and if you ever really load it up the waist straps distribute the weight efficiently.  The pack is the same size empty or full, so I never have to be concerned about it not working as a carry-on.

Wrap Up:
Modern Flow’s backpack is a great pack.  The plethora of pockets and straps can be a bit confusing (maybe a pamphlet 🙂 would help) but once you’re familiar with it you’ll come to appreciate the options.  The snaps on the zipper ties coming off was annoying but the team at Modern Flow assured me that moving forward they’ll be checking every bag before it ships for loose snaps.  I’ve used it for travel and as a gym bag and it worked great for both.

I’ve used Origin’s Mundial backpack and Modern Flow’s backpack.  I really like them both and you won’t go wrong with either product.  I prefer the Modern Flow pack because of the compartmentalization, extra support, design and sturdiness of the pack.  The pack is $100 and can be purchased here.  Be sure to check out Modern Flow’s website, Twitter & Facebook for sales and other promotions.