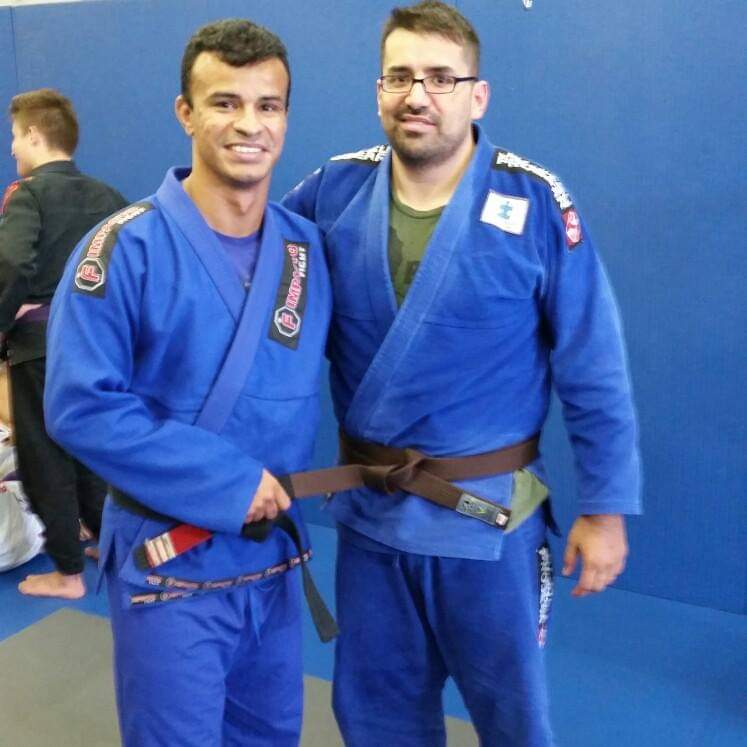 BJJ Legends sat down with Rolando Saenz, one of the first American male GFTeam black belts promoted by Professor Alves in the US. We wanted to find out what impact Professor Alves has had on Rolando’s BJJ journey.

A Legacy is not guaranteed. Solidifying a legacy starts with an idea that reaches its culmination by epitomizing one’s magnum opus. A seed is planted and by grace; it grows with each new experience, with each new bold idea, and every time you inspire others to see something through to fruition.

The GFTeam founding fathers planted a seed that continues to grow thanks to one of its most loyal athletes Professor Bruno Alves. Professor Alves is an integral part of the GFTeam legacy continuing in the United States.

BJJL:  When did you start training in BJJ?

Professor Rolando Saenz:  I started training in 2002 in Huntsville, TX, during my last year of college. Back then, American BJJ was more focused on MMA and fighting and that was my initial draw to the sport.

BJJL:  Why did you start training?

Professor Rolando Saenz:  Much like many of the first people that started training in the US, I was inspired by Royce Gracie’s utilization of Jiu-Jitsu in the first UFCs. I was into fitness at the time and I felt that there was no real goal or end game in the journey and that live sparring helped motivate my training.

BJJL:  What keeps you motivated to train?

Professor Rolando Saenz:  I guess I have drawn a genuine love for the daily grind. I would say that most of the training is discipline more than motivation. While I have never desired a role in coaching athletes, I enjoy helping and seeing others embrace the process.

BJJL:  When did you first meet Professor Bruno Alves?

Professor Rolando Saenz:  I first met Bruno about 7 to 8 years ago. I was at a school that was losing its primary black belt. Some students were following that gentleman. I heard Bruno was coming to a local school. He was held in high regard by many of my friends who had trained with him.

BJJL:  How did he help your BJJ game grow?

Professor Rolando Saenz:  I have always subscribed to many of the same training philosophies that Bruno has. Having an external eye on my progression and development has been highly beneficial. He puts me in positional training that forces growth while recognizing some of my potential shortcomings as an “athlete.”

BJJL:  What was the first belt that Professor Alves promoted you to?

Professor Rolando Saenz:  Bruno first promoted me to brown belt about 7 years ago

BJJL:  How did Professor Alves encourage, prepare, and support you as you mastered each level of your training?

Professor Rolando Saenz:  I think Bruno adjusts and encourages students on an individual basis rather than a collective philosophy. He has found the right ways to force growth and keep me learning without being overbearing.

His style varies from student to student. I cannot put a finger on how he determines that.

BJJL:  How did it feel when you finally received your black belt?

Professor Rolando Saenz:  The moment was surreal and unexpected. I trained many years without a belt, so I have never been a belt chaser per se, but to play it down would be a bit disingenuous. There is a degree of pressure based on the expectation of others, but in the end, none of it really matters if you put in the work.

BJJL:  What is your training pet peeve now that you are a black belt?

Professor Rolando Saenz:  People calling me professor makes me cringe every time. Another pet peeve is blindly chasing a belt when they do not realize that it means little to nothing in the big picture. A belt does not command respect.

BJJL:  Would you like to see BJJ competitions return to submission only?

Professor Rolando Saenz:  I cut my teeth on sub-only tournaments as a white and blue belt, but the style doesn’t lend itself well to competition and spectators. While variety is always good, I think it is more difficult to watch and harder on the athlete.

BJJL:  In all of the years of training, teaching, and observing, in your opinion, what stands out the most about Professor Alves and the bond he maintains with his students?

Professor Rolando Saenz:  I think the loyalty that many of his students have for him is admirable. That loyalty maintained over time is a two-way street. It is not a blind following of a cult leader but a guy that also gives back by leading his students into competitions, small or large scale. His respect for building women’s Jiu-Jitsu is admirable when I look back at the initial role women had in BJJ. I trained for many years with only 1 or 2 women in the class. He helps build an atmosphere that is more inclusive for females.

BJJL:  Name one thing that he taught you that remains a part of your BJJ discipline to this day?

Professor Rolando Saenz:  While I always subscribed to the idea, he helped reinforce the concept that not everything works for everyone. Changing styles and moves to adapt to your gifts or setbacks is ok. I have worked with many instructors that taught something, and if you adapted it, you were wrong. Bruno is open to the idea of adjusting and even throwing something out if it does not work for you. That and his hip switch half guard sweep he used to get me in years back.

BJJL:  What attributes do you consider a well-rounded practitioner should have?

Professor Rolando Saenz:  I would not say I have my finger on that quite yet. I sometimes believe a certain standard should exist for a belt and then someone with certain physical or mental limitations provides an exception. Knowing that I or anyone else does not have all the answers is important.

BJJL:  If you could go back and change anything about your training experience with Professor Alves, would you? If so, what would it be and why? If not, why not?

Professor Rolando Saenz:  I cannot say that I would change anything. Bruno has helped bring out a better dedication to the sport than the path I was on before. Sometimes he motivated me by a simple question asking me to train more when I was doing 3 days a week. Sometimes he helped my level accel by putting me in situations that I was not comfortable or proficient with. I am fortunate to have him as an instructor.

BJJL:  Is there anything you would like to say to Professor Alves or anyone that you have not had a chance to regarding their support throughout your journey?

Professor Rolando Saenz:  I do not say it enough, but I am incredibly grateful for his time and insight. While the sport has become more profitable over the years, times are undoubtedly lean as a martial arts instructor. I have never had the aspiration to participate for financial gain out of respect to those who decide to make it their livelihood.

Pericles said, “what you leave behind is not what is engraved in stone monuments but what is woven into the life of others.” GFTeam and one of its staunchest supporters, Professor Bruno Alves, continues to build upon a living legacy.

Daily Rickson Interview Series 8 of 24: What is the Service Pillar of JJGF?