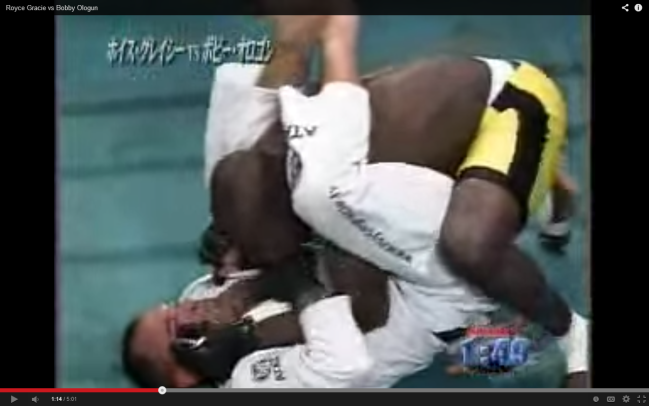 In the storied career of the iconic Royce Gracie, there have been many memorable moments and fights that have defined his career.  Be it the Gracie Challenges that began the Brazilian Jiu Jitsu rise, his UFC 1 match against Ken Shamrock, or maybe his phenomenal litmus test against Sakuraba that lasted roughly 90 minutes, Royce has provided some fantastic moments for the fans of Mixed Martial Arts.

However, one moment that seems to go unnoticed was his fight against Bobby Ologun.

What made this fight so unique was Ologun himself.  Born in Nigeria, Ologun was on a Japanese gameshow, and through his charismatic antics, became a big star in Japan!  He had his own show, where he would try out new activities and sports.

He would eventually give Judo a shot, and the running joke was that he’d be ready to fight in an actual MMA fight by year’s end.  Ologun continued to train, and 8 months after he began his experiement, he was slated to fight against the pioneer himself, Royce Gracie!

The dynamic was fantastic: the icon vs. the TV star!  Seeing the fight was held in Japan, Ologun had a strong fan base in attendance.  Despite the vast experience gap, the fight didn’t play out as you would assume.

Dealing With The Element Of Surprise In Stride

Be it by luck or by skill, Ologun was actually able to control the pace of the match early on the first round.  Was Royce taking him lightly?  Was he toying with him?  Whatever the case may be, Ologun had the dominant position on one of the most notorious men in Mixed Martial Arts history!

With the fans on their feet in shock, Royce showed the signs of a true veteran by not overacting.  The much more athletic Ologun clearly had a more impressive frame that could probably pack a nice punch, but Royce wasn’t about to find out.

Keeping his wits about him, Royce did the smart thing and kept the arms—at least one most of the time—pinned to his own chest.  By establishing a high closed guard, Gracie was preventing Ologun from posturing and reigning down shots.  By eliminating the hands or his opponent, Royce not only saved himself from unwanted damage, but also limited the ground game of Ologun.

However, Ologun continued to dictate the match and where it went.  Maintaining top position, Bobby had the legend in the corner, and was ready to unload.  Again, being the crafty vet, Royce was aware enough to angle off to the side, while maintaining a grip on the arm of Ologun.  This bought him time to fend off any serious strikes, and allowed him to get his right hand on the calf of Ologun.

From here, Royce was able to adjust Ologun’s footing, bringing him back to the mat.  This eliminated the posturing advantage Ologun had, and brought the fight back to where Royce was most comfortable.

Trusting In The Foundational Skills of Brazilian Jiu Jitsu

The bell would eventually ring without any major damage being done, but clearly something special was happening, and it’s hard to argue that Ologun didn’t win the first round.

At the start of the second, Ologun was able to stuff a takedown and even plow Royce over, regaining dominant top position.  This would not last long, as Gracie was soon able to hit a series of sweeps, bringing him back on top in full mount position.

Aware of the power and athletic ability that Ologun brought to the table, Gracie was smart and was quick to get high up on Bobby when he mounted him.  By establishing the mount closer to Ologun’s chest, Gracie didn’t have to worry about Ologun getting his hips under him and exploding and bucking him off.

The full mount is known in the MMA world as the most dominant position, one that would bring some vicious punches and elbows to the poor soul trapped underneath.  However, it was clear that Royce had an agenda, as he didn’t throw a single punch from this position.

Rather, he methodically worked his way towards the armbar.  Once he had it applied, his top leg had slipped off Ologun, and was on the mat for the most part.  Even with a little kink in the process, Royce was able to work around the technical flaw and earned himself the submission victory in round two.

Royce has proven to be very influenctial on the BJJ scene. For more thouhts on HOW important Royce really has been check out this article!