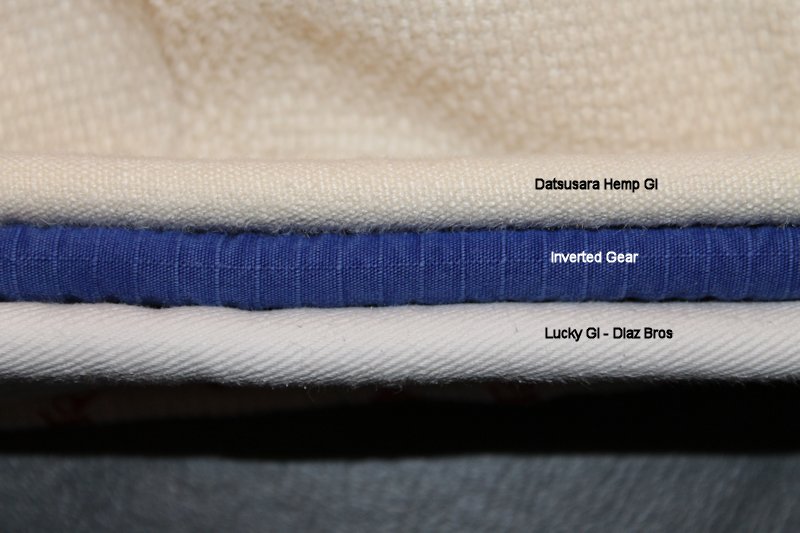 “Inverted Gear was founded in February of 2012.  We had grown tired of the current trend of high price pre-order limited edition gis, which meant months of waiting and small window of purchase.  We strive to bring a high quality product at an affordable price…
We are not for the tough guys, our logo is a clear indication of what we are about.  We are for the guys and girls that want to be on the mat…
Be part of the Panda Nation”

I was introduced to Inverted Gear about a year ago.  I was competing in my first IBJJF tournament and kept seeing these gis with upside down pandas on them.  They were everywhere, seemed to fit well and the panda logo is pretty cool.  It wasn’t until a few months ago that I was able to finally get my hands on one of these gis and see what all the fuss was about.  BTW, Inverted Gear has the nicest gi bag that I’ve ever seen.  My oldest daughter fell in love with it instantly and has claimed it as her own.

Design/Features/Construction:
The kimono consists of a 550g pearl weave jacket with 12 ounce ripstop pants.  The pants have a pearl weave gusset.  Elastic rope and 6 belt loops are used to keep your drawers up.  There is a mouth piece pocket in the pants (which I’ve never used).  A 550g weave jacket is substantial and should hold up well to rigorous use for a long time.  The stitching is reinforced throughout the jacket.  The rubberized collar is covered with ripstop and thicker than average.  There is ripstop tape at the interior seams as well as a special panda satin tape at the cuffs and the bottom of the skirt.  The pants have reinforced stitching at stress points as well as extra reinforcement in the center of the rear.  The pants also have an offset rear waist line to stay in place better.  The knees have additional reinforcement that starts at the upper thigh and extends down to 7.75” from the cuffs which are lined with the same panda tape as the jacket cuffs.

Jacket:
The good folks at Inverted Gear have stated that they’re more interested in spending time on the mat than blinging out the latest limited edition gi.  Their jacket is consistent with that statement.  Are there some cool details?  Definitely.  But they’re typically subtle and in some cases only noticed by the user.  Each shoulder has the ubiquitous upside-down panda logo.  The logo is fully embroidered, roughly 3” in diameter and well sewn.  The only patch on the gi is the ever-present manufacturer’s identification logo patch at the bottom of the left side lapel.  A few details that aren’t immediately apparent are: custom satin tape at the cuffs and skirt, ripstop tape covering over the interior seams and extra reinforcements at the skirt slits and armpits.  Something else that I noted is that for a pearl weave gi this one feels very sturdy, almost like a gold weave.

Pants:
Inverted Gear’s pant, like the jacket, is more about function than anything else.  The only embellishment on the pants is a single patch on the upper right thigh (1.75” x 4”) with the company name and logo.  The stitching is even and no loose threads were noted.  The reinforcements in the butt and knees are solid and the overall weight is on the heavier side for ripstop (which makes it the same as most cotton pants).  In a nutshell you’re getting heavy ripstop pants that have been designed and constructed to hold up to a lot of training.

Test Run:
I’ve had two different people testing out the A3L, myself (6’4”/195lb) and Kevin (6’1”/190lb.)  The gi fits both of use very well.  The pants are little short on me but pants almost always are.  They fit Kevin much better.  The gi performed well and has shown no signs of wear and tear in the few months that I’ve been using.  It’s a little on the heavy side which makes it ideal for cooler weather.  Kevin has said it’s his favorite gi now and is looking get another one.  Editor’s Note: I intentionally shrank the gi down for this review.  I dried it completely twice.  Before drying the wingspan was ~69”.

Special Considerations:
Inverted Gear is further proof that a small, new gi manufacturer can make a high-quality gi and keep the price reasonable.  The inclusion of a really nice gi bag and the cool embroidery are just a bonus.  How can you not like that logo?  It’s friggin’ awesome!  Last and definitely not least, Inverted Gear is a major supporter and sponsor of Tap Cancer Out.  Once again a small company is front and center in giving back to the community.  Did I mention that they have the coolest gi bag I’ve seen so far?

Wrap Up:
If you looking for a durable pearl weave gi that’s well-priced and has subtly pleasing aesthetics then Inverted Gear is the place for you.  The distinctive inverted panda logo really sets the gi apart from the crowd but does in an understated way.  At $125 (white) and $140 (blue) they also fit into almost everyone’s budget.  I’ve even seen it at BJJHQ a few times for ~$100, which is an incredible deal.  Do yourself a favor and check Nelson and crew at their website, Facebook and Twitter.