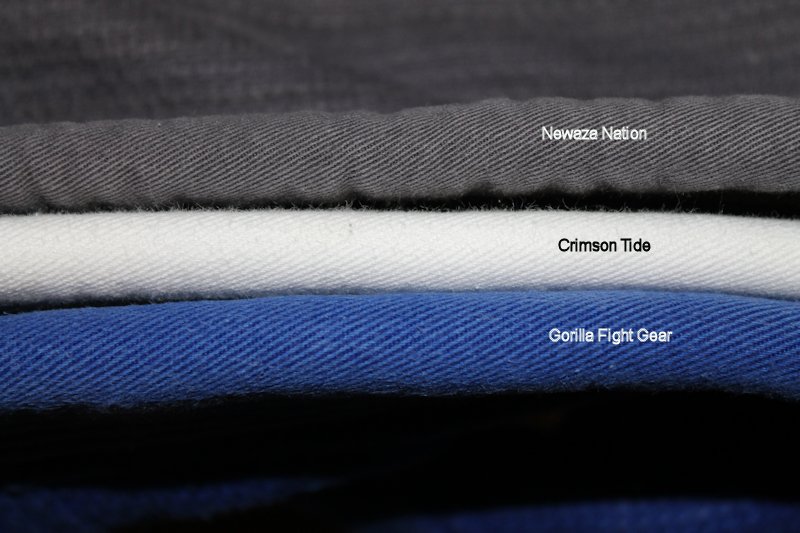 Roots Kimonos is a new gi manufacturer out of San Diego, CA.  Their first gi, the Crimson Tide, has created quite a buzz in the online BJJ community and we’re lucky enough to be the first to review it.  Roots has committed to provide the highest quality gis possible while never charging their customers more than $144.99.  These kimonos are intended to provide you with a premium gi, with a host of features while staying affordable.  The gi in this review is an A4 and the Tide is offered in sizes from A1 to A4.

“Roots started because I was tired designing gis for other companies and wanted to do my own thing. I started with the logo and went from there. I used the name because no matter where you train, the journey of jiu jitsu has many roots. Always learning from everyone you see do jiu jitsu. And they have got their roots from many people as well. Jiu Jitsu itself is a root system that has grown a tree of many schools and tournament series.  I wanted to bring something to the BJJ world that was an awesome product and had meaning to it. The Tide is the first major release for Roots but there are many more kimonos in development as well as rash guards and apparel.”  Mike founder of Roots Kimono

The gi top is constructed of a soft crystal weave fabric and is cut similar to most BJJ gis.  For comparison to a more well-known brand the cut is almost identical to my Bull Terrier Super Gold.  The gi is made of 550g crystal weave and 100% cotton.  The pants are made of 10oz drill cotton and have reinforced knees with a crystal weave gusset.  Seams are reinforced throughout the gi at all stress points and the collar is EVA foam filled.  Stitching of the gi, patches and embroidery is all of good quality.  The collar is stiff and pretty typical for thickness.  For a size comparison I’ve shown it next to my Newaza Nation and GFG Apeman gis, which have the thickest collars of any gi that I’ve ever owned.

The gi is made out of crystal weave.  This is my second crystal weave gi and like the other the weave is very soft and comfortable to wear.  If you’re not familiar with crystal weave gi’s they’re kind of a cross between single weave and gold weave.  It’s lighter and suppler than a gold weave but heavier and less likely to stretch when compared to a single weave.  This gi is not as light as a pearl weave but still comfortable and it doesn’t have the scratchiness that most pearl weaves have.

The kimono has the Roots company logo embroidered on each sleeve near the shoulder and again at the base of the neck.  The other adornment is limited to a few patches.  Both shoulders have the Crimson Tide patch, a patch is at the bottom of the rear of the gi, a small Roots patch at one the right side of the skirt and another at the base of the lapel.  As mentioned earlier all the seams are reinforced with contrast stitching that adds a nice design element to the gi.  For those that like to remove patches these should be pretty straightforward to remove if needed but the embroidery isn’t going anywhere.  The kimono also has a feature that you won’t find in many gis under $150.  The seams in the collar, interior of the sleeves, cuffs and skirt are all covered in felt tape for additional comfort, a very nice detail that few bother with and an example of the level of detail that you’ll see with this gi.

The overall design is similar to some other premium gis, particularly Shoyoroll or Origin.  Roots has a minimalist approach to design with very clean lines and appearance.  The gi itself is a little baggy for someone with a lanky build so I washed and dried it on hot to shrink it.  After the shrinking the gi fit better and was typical of most other A4s.  In a perfect world I’d like the cuffs and sleeves to be a little more fitted and to have the body an inch or so smaller.

Every time that I read the comment “More pants loops” I automatically think of Christopher Walken in SNL screaming “More Cowbell”.  Now you’ll have more than you’ll know what to do with.  With six belt loops and a nice cord drawstring there are no issues with the Crimson Tide gi pants and cord.  The construction of the pants includes reinforced seams throughout and has the felt lining for the cuffs.  Something that’s a little unusual is the reinforced butt crack on the pants which is a new one for gi pants.  The slits on the side are also covered in felt tape.  The reinforced knees start at the inseam and continue down mid-shin level and the gusset is made of the same crystal weave material as the kimono top.

Roots has kept the minimalist approach for the pants.  There are identical Roots patches on each hip, and two small patches on each side of the front.  Contrast stitching and triangle pattern at the side round out the design elements.  The red in the patches is a very dark maroon and may almost look black in some pictures.  The pants fit well and had good length, even for me.  Not as light as ripstop but still light enough to be able to play a more open guard while soaked with sweat.

After trying on the kimono and pants right out of the bag I washed it in cold with white vinegar to make sure that the color of the patches and stitching sets completely.  After that the pants were hung dry and the kimono top was rewashed on hot and then dried on high-heat to shrink it down to fit tighter in the chest and arms.  After the drying the top fit quite a bit better.  During class I had several teammates comment on the gi and several mentioned the similarity to Shoyoroll’s styling.

The tide performed well during rolling and drilling.  The kimono top didn’t seem to stretch while I was in a training partners guard and the pants didn’t bunch up or stick to my legs as I played butterfly.  The top itself is very comfortable and soft.  I’m fast becoming a fan of crystal weave gis, especially as the weather gets a little colder.

I really like to support smaller, upcoming companies.  I also understand that when dealing with the unknown it’s hard to part with your hard earned money.  As someone who has been burned in the past I hope that these reviews are helpful for you, the reader.  Mike was very available throughout the process of getting this gi and his commitment to keeping the price down is commendable and refreshing.  I’d have no reservations suggesting to those that are looking for a new gi to check out Roots as an upcoming gi

I first saw a mock-up and picture of this gi on Sherdog about a month ago.  I was really impressed with the pictures of the gi and with what Mike was able to tell us about his company and their products.  I can say that it looks better in person and the attention to detail surpassed what I had expected.  I love the styling, design choices and attention to detail that Roots have put into the Tide.  While it’s a little baggy for someone as lanky as myself the fit doesn’t hinder your rolling or give your opponent an advantage.  At <$150 this gi is a very good price and would compare favorably to many other gis in the $170 to $200 price range.

Roots is an example of an upcoming company that is putting together a good product at a good price.  If the Tide is an indication of things to come they’ll be around for a long time to come.  Don’t forget to check out the picture gallery at the end of the review for a lot more pictures.