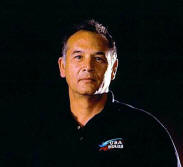 In this special edition feature BJJ Legends gives recognition to three judokas that have made a significant and influential impact in the Oklahoma community.

The state of Oklahoma has been the landmark of some of the best quality production of Judo, Wrestling, and Jujitsu talent out of the United States. Many of these great figures have risen from the rubble and went on to not only attain successful careers in their field but also built a foundation where they have been able to make a positive and influential contribution in their community. Judo is known as the evolution of jujutso also known as ju jutso an art taught from the earliest of times and formalized during the Edo period, 1603-1868.

Pat Burris: With a longevity that dates back to the 1960’s, Coach Patrick Burris is considered by many as a judo pioneer in Oklahoma. Known for his self-motivational personality and unique teaching approach, Patrick Burris influence has made a strong impact on the grappling community worldwide.

[social][/social]Born in Hawaii Burris began his judo journey under the tutelage of his father at the Pearl City Judo Club in Pearl City, Hawaii. As he made his ascent in the ranking he would reach major heights in his athletic endeavors. His achievements would be showcased by successful competition victories of becoming a 7 time Judo National Champion, Pan American Champion, and getting the opportunity to represent his country in the Judo Olympics in 1972 and 1976.

With year of experience and credentials on his resume in an effort to give back to the community, he would establish the USA Stars Foundation in 1992. This prestige program would serve as a one-point destination hub designed to assist judo aspirants with reaching their dreams of competing in the Olympics. The USA Stars Foundation has opened the door for many judokas granting them the privilege of learning from some of the most elite judo players in the world.

As a mentor Burris would guide many students to attaining championship titles at World, National, and Olympic level in Wrestling, Judo, and Sambo. This collection of leadership, charity, and permanence would garner Burris high volumes of gratitude and respect from his peers and superiors. Steaming from this admiration from his colleagues he would be honored with numerous appreciation awards in his career which include Hall of Fame recognition, The Jim Thorpe Man of the Year Award, and the most prize award of them all receiving the “Fight Sprit” award on seven different occasions.  http://burrisusastars.org/index.html

Mike Darter: Combining Judo application with street defensive tactics, it is no surprise why third degree Judo black belt Mike Darter’s influence has changed the landscape of martial arts practices in Oklahoma City. Starting his journey in 1989 while attending college at the University of Oklahoma, with aspirations of becoming a police officer Darter set his sights on finding a hobby that would help physically prepare him for his future career. Looking into a variety of selections Darter began studying Aikido going on to later add Judo to his arsenal due to their close similarities to police self-defense tactics.
After successfully completing college, his knowledge and skills would be put to the test during his entry into law enforcement. While dealing the rigorous task of working in the gang and drug unit division, Mike’s years of experience would pay off handsomely as he would use the techniques he learned in Aikido and Judo to effectively subdue the suspect at maximum efficiency with minimal effort.

“Working as a police officer, I got to use the techniques that I learned quite a bit. I was able to see what actually worked and what didn’t. Aikido was great for controlling someone while pat searching them, or escorting or handcuffing them, ”Darter said. But if there was resistance, I always transitioned to judo immediately. Judo was a great way to quickly de-escalate would be violent situations. Catching somebody in a throw, or foot sweep to the ground, usually on concrete, would quickly take the fight out of them. The groundwork of judo, known as ne waza, also proved to be very useful if the fight went to the ground, which it most always did.”

With eager co-workers yearning to learn the art of Judo, Mike would take on the role as the Judo instructor for his police unit. With starting pool of 10-to-15 students forming a police judo team, Darter’s squad began competing in many local tournaments, state police games amongst other events achieving major success in their venture. Not too long after the police team’s attainment hoping to expand his horizons, Mike Darter set his sights on teaching Judo to anyone who wanted to learn. Opening its doors in 2000 Darter formed the Oklahoma City Defensive Tactics. Since its forging over a decade ago in northwest Oklahoma, Darter’s program has been a driving force in Oklahoma City, offering top quality instruction for kids and adults judo which contributes to the school’s success in the competition and continual growth of the academy. http://okcjudo.com/

Brian Picklo: When you think of great and aspiring athletes out of the state of Oklahoma, no one has had the Cinderella success story of one Brian Picklo. He is the quintessential example of how dreams can be transformed into reality if one works hard and never gives up on their goals. Starting his career off as a high school wrestler he would experience some turbulence in his quest, never getting the opportunity to qualify for State or Nationals. With a deep passion for wrestling embedded in his heart he would continue his pursuits during his entry at Michigan State University. Gradually making his way up the ladder he would get the privilege of becoming the starting 190 pounder for University’s wrestling team. Throughout the course of his wrestling tenure he would go on to achieve major success in his career which include high honors of  being a Big Ten Conference Champion, 2x Division 1 All American Wrestler amongst other prestigious titles.
Flash-forward 12 years later, hoping to keep himself active and in shape he would take up Judo. Once again falling in love with the discipline he began challenging himself to newer highest going on to fully commit time to the art. Like his previous wrestling profession, he would build a great reputation in the judo community becoming an accomplished and well respected competitor on the national level eventually reaching the highest pinnacle of his career at becoming an alternate for the 2008 Judo Olympics at the age of 34 years old.

Taking his skills and knowledge onward, Picklo would open up Matrix Grappling in 2009 where he would begin to develop young apprentice to reach the same success he accomplished in Judo and wrestling.  In addition to his contributions to his successful academy, Brian Picklo has also made a major impact to the grappling community in his state. Organizing the “Judo for Wrestlers Camp” the former Olympian broke barriers which has allowed the art of Judo to be accepted and loved by many in an area that is predominantly wrestling oriented. As a result this change has given wrestlers the opportunity to not only learn judo but also share their knowledge in an effort to make everyone grow at their craft.

“Wrestling is really big here in Oklahoma while Judo is really small,” Picklo said. “Through my experience with my wrestling and my involvement in Judo I found out how well they complement each other. The way I have spread Judo throughout the community is I’ve been taking my Judo students to wrestling event, which has the wrestling community getting to see what Judo can do for the wrestling. I’ve a lot of kids from different teams come train with me on their off season. Overall it’s great being able to see kids from different communities coming to learn Judo.” http://www.matrixgrappling.com