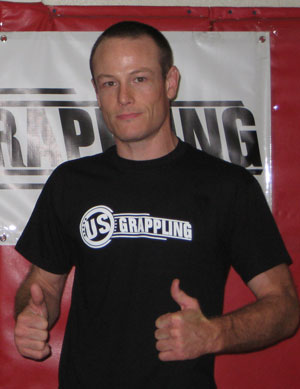 It all starts with an idea.  And the idea of Andrew Smith ( for the complete Q & A – click here) could revolutionize the world of sport BJJ. Smith, a black belt in Judo and BJJ, is co-owner and instructor at Revolution BJJ in Richmond, VA. Like so many of us, Andrew claims to be completely obsessed with Jiu-Jitsu.  He began wrestling in high school, then found Judo in college. His exposure to BJJ came through working with Jiu Jitsukas that passed through his academy throughout the week. The ground work fascinated him, and even though there were no Jiu-Jitsu schools nearby, he studied on his own until 2002, when a BJJ school in Richmond opened its doors.

Smith became an active competitor in grappling tournaments, and would travel multiple hours to get the chance to compete. He noted that many of the BJJ tournaments he attended were poorly-run.  The more he competed, the more opportunities came along for him. He picked up sponsors, gained administrative positions in organizations, and worked as a referee. He soon realized his role and importance on the competition mat.

“It was gratifying work to know that I could improve the quality of an existing tournament,” he says.

In 2005, Smith was approached and asked to run tournaments for three organizations, and his administrative role increased greatly. He found that he needed help with the organization and structure of the tournaments. Enter Chrissy Linzy, the task management and organization specialist that Andrew employed to help him. Soon followed her husband, Brian, who wrote their organization’s bracketing program from scratch.

Together, they founded their own organization, US Grappling.

[blockquote class=”quotes”]“The submission-only format is beautiful and pure. It is truly the only objective one on one contest,” says Smith[/blockquote]

The organization itself is based on ideas; ideas to make a better tournament, ideas to create a more competitor-friendly atmosphere.  Perhaps the most innovative idea, however, is their way of dealing with scoring. They don’t.

US Grappling uses a unique submission-only format in many of its tournaments, the first of its kind in sport BJJ.  It’s exactly what it sounds like. No points, no time limits. Competitors shake hands, and the match goes on until someone taps out.  “The submission-only format is beautiful and pure. It is truly the only objective one on one contest,” says Smith. “If one person says the other is the winner, how much more definitive can you get than that?”

Many organizers have been hesitant to adopt the idea of a submission-only format, saying that these style tournaments will “run too long” or are strictly “unmanageable”.  Smith, however, happily disputes that.  “We’ve run a dozen or so Sub Only events, with many, many more to come. All of them have worked.”

Although they have run the sub only events with only small-to-medium-sized tournaments, Smith says that tackling larger events is definitely in the works.
As for the future?   Smith is dedicated to constant improvement.

“We’d like to run the best tournament we can, not just better than what else is out there. It is this constant drive to improve with each tournament that sets us apart as an organization that is run for competitors, by competitors. We want to provide the best experience for the competitors, and nothing else.”

BJJ Legends:  Tell me about yourself (your BJJ background, how you got into it, etc.)

Andrew Smith: I run a Brazilian Jiu Jitsu gym in Richmond, VA with my friend Trey Martin.  It’s called Revolution BJJ, and you can find out more info at www.revolutionbjj.com.  I pretty much do nothing but jiu jtsu with every hour I’m awake.  This might sound like a bit of an exaggeration, but I’m literally doing something with BJJ all day, every day, with very few exceptions.

I have a bit of an obsessive personality when it comes to certain things, and BJJ is a prime example.   I wrestled in high school, and really enjoyed it.  When I went off to college, I wanted something similar, but wasn’t able to do any wrestling.  However, in January of 1997, I found judo.  I fell in love with the ne waza (ground) aspect.  The judo club where I trained was very unusual:  we’d get a lot of local BJJ guys passing through to train, or coming in to the open mat on Sundays.  As a consequence of that, coupled with the fact that I enjoyed the ground aspect of judo more than the takedowns and throws anyway, I became obsessed with BJJ. I started watching old MMA videos, reading books, whatever I could get my hands on.  Eventually, my friend Eric Burdo started Richmond Brazilian Jiu Jitsu in January of 2002, and my consistent, formal training began.  I never looked back, and every year my training became more involved and intensive.  I presently average training 11 times a week, and I love every minute of it.

BJJ: Tell me about US Grappling (how it got started, who you work with, what issues you ran into starting up, etc.)

AS: You have to begin with an understanding of the grappling tournament scene a little over a decade ago.  In a word:  lacking.  I would travel for six hours every other weekend to compete, sometimes more, and when I got there to compete, the tournaments I was doing were seldom (if ever) run well.    Meanwhile, I was going to judo tournaments all the time as well, and noticing a lot of differences in the approach of the tournament organizers.  I took a lot of early mental notes without really meaning to.

Around 2003, I was competing a great deal locally and regionally, and doing all right for my skill level.  It wasn’t that I was the best competitor out there, it was just that I was competing all the time, and getting my name out there a lot.  This led to a couple of sponsors approaching me, asking if I wanted to represent their company while competing.  This was just what I needed to be able to compete at more places, further away.  In a similar fashion, I realized that I could help out with various different administrative aspects of tournaments, including refereeing and promoting.  I did so for a while, and realized I was pretty good at it.  Equally important:  it was gratifying work to know that I could improve the quality of an existing tournament.

Fast forward to late 2005.  I had just returned from Brazil, and I was fervently determined to do nothing but jiu jitsu with my time.  This was a driving force for me; it determined how I spend nearly all of my waking energy.  There’s really something to those who say that the hard part about a career choice is figuring out what you really want to do with your time; figuring out how to make a living from it is considerably easier.  At least, that’s how it was for me.  I was approached by three different organizations, one right after the other, about running events for them.  I agreed, and my administrative role increased tenfold.  I saw a need for more organization and structure within the tournaments I was asked to run, and I employed Chrissy Linzy, who specialized in task management and organization at her “day job”.  Brian Linzy was soon to follow, and Brian eventually wrote our bracketing software from scratch- there just wasn’t anything out there that met our needs.  It became apparent that the role the Linzys would play would be pivotal in the growth of this tournament circuit, but also in the vision, so we became partners and founded US Grappling.

BJJ Legends: Explain the submission-only tournament style. How does it work? What made you guys decide to adopt that format for many of your events?

AS: The Submission Only tournament format is beautiful and pure.  It is truly the only objective one on one contest.  If one person says the other is the winner, how much more definitive can you get than that?  There is truly no way to remove all the subjectivity and controversy from points events of any sport short of Submission Only grappling matches.

It works like this:  two competitors shake hands, and they grapple until one person declares the other the winner.  We pretty much just get out of the way and let the match happen, with the only exceptions being if the competitors are about go go off the matted area or run into another group, or if an illegal technique is being applied.  We’ve done about a dozen of them, and if you’re interested, you can find out some statistics and results at www.submissiononly.com.  Chrissy has taken some initiative in doing some statistical analysis, and we’ve been careful to record match times and submission results.  As an active competitor, I can say that there is simply nothing that compares to the Submission Only format.  If you’ve never tried it, you are truly missing out.

BJJ Legends: What has been successful about the sub-only events? What have been your biggest challenges with it?

AS: The proof is in the pudding, so to speak.  As I mentioned, we’ve run a dozen or so Sub Only events (many, many more to come).  All of them have worked.  The biggest challenge, hands down, has been reluctance to try the format.  “It’ll never work”, naysayers say.  “It’ll last forever!  You can’t manage that kind of format.”  Clearly, we can and have managed it on both a smaller and medium sized scale.  We look forward to applying our formula to a larger scale Sub Only tournament in the near future, and to continuing to provide the best experience possible for the competitors.

BJJ Legends: What are your plans for the future of the organization?

AS: Put simply:  continue to improve.  We’d like to run the best tournament we possibly can, not just better than what else is out there.  It is this constant drive to improve with each tournament that sets us apart as an organization that is run for competitors, by competitors.  We want to provide the best experience for the competitors, and nothing else.

To that end, we’re planning about 30 events for 2011.  You can always find out what we’ve got coming up by checking out www.usgrappling.com.