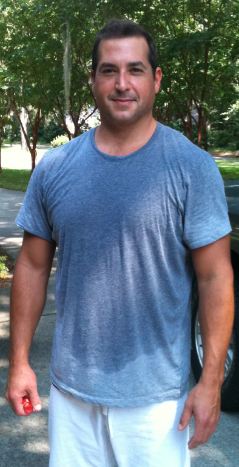 Legendary celebrity chef Paula Deen is known by millions throughout the world for her culinary skills and great sense of humor. For more than 40 years Paula’s sons Bobby and Jamie Deen joined her in the kitchen honing those same skills that have made all three the most highly rated Food Network stars in the history of the channel.

Bobby spent his formative years with his mother and brother building an empire based on southern food. From restaurants, to magazines, to cookbooks, to television Deen’s career has evolved from a successful restauranteur to a television heart throb. The last decade has proved to be a big one for Bobby and his family.

In 2006, Bobby Deen was named one of People Magazine’s 50 Most Eligible Bachelors. Road Tasted, which featured Bobby and his brother Jamie traveling the country in search of the best local edibles and unique cuisine was the most popular show in network history on The Food Network when the brothers were hosting it. Armed with three best selling cookbooks the Deen Brothers will be releasing their fourth cookbook entitled Take It Outside in 2011. Bobby is a regular guest on CNN, Fox News, and NBC’s Today Show.
Bobby took a moment to sit down with BJJ Legends Magazine to discuss his love for Brazilian Jiu-jitsu and how it has improved his life inside and outside of the kitchen.

BJJ Legends: It is always interesting to see the kind of people that train BJJ and why. How did you get involved with BJJ?

Bobby Deen: “I’m always looking to improve myself. I love to learn. There are so many things I want to accomplish personally and professionally. I love fitness and I was looking for a new, fun way to get fit. I was training hard with my strength coach Sam Carter and was looking for something new. I was always interested in self-defense, but I wanted something different. I new a great guy who was a great teacher and the rest is history.”

BD: “I am learning something real and that makes me fitter, but it’s so much fun too. BJJ has improved my confidence in so many ways. It’s so positive for me.”

BJJ: How long have you been training?

BD: “I’ve been training on average twice per week for close to 2 years. During this period I have had to take off because of injury, work, travel, etc. I’m also living in LA part-time with my girlfriend, but when I’m back in Savannah I train privately with Mike Sergi.

BJJ: What are your jiu-jitsu goals?

BD: “I want to learn as much as I can. I want to go as far as possible. I got one degree on my white belt a few months ago. It was motivating. I wasn’t sure if BJJ was for me when I first started, but I know now that I can do this. I just want to keep progressing.”

BJJ: What BJJ personalities have you trained with or met?

BD: “I went to my first seminar last summer with Rickson Gracie black belt Luiz Palhares and I met Kid Peligro not to long ago when he was in Savannah doing a seminar at Serg BJJ.”

BJJ: Are you going to be back on TV any time soon? Do you have any big plans in store?

BD: “I’m still involved with my mother’s show on The Food Network. I’ve maintained a good relationship with them. I have a show coming out in 2011. We’ll begin taping at the end of this year. I’m working with Follow Productions and Gordon Elliot and it will be a prime time show. We’re calling it Food Commando. My healthy lifestyle and physical fitness will come into play. I’ve also got another cookbook coming out in 2011 as well.”

Go Deeper than Gracies, A History You May Not Know of BJJ