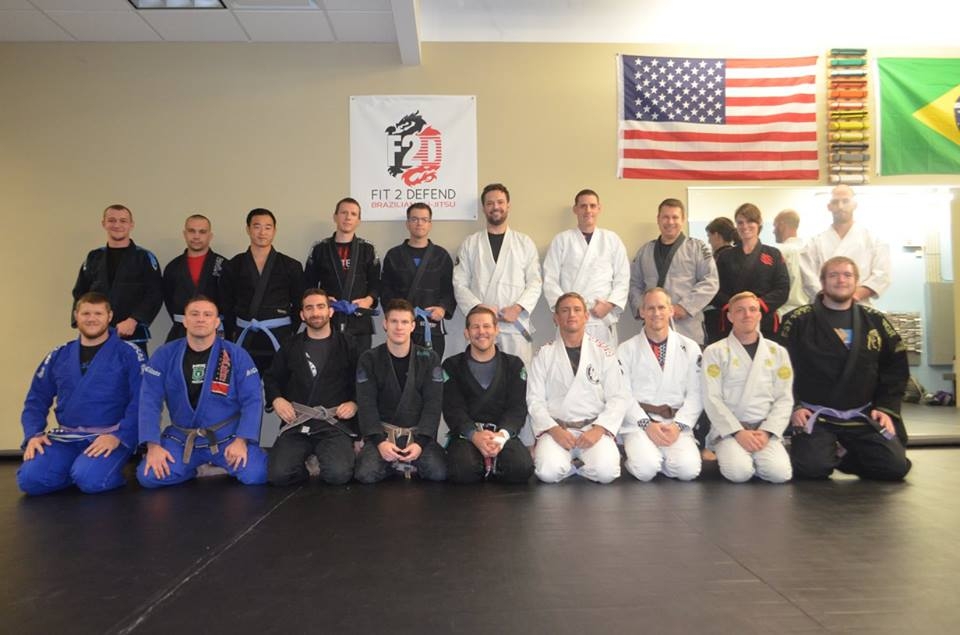 Brazilian Jiu-jitsu is an ever-growing Martial Arts discipline practiced and taught worldwide. Cruising through any big city or small town chances are you will find a BJJ academy, as its presence aims to make a positive difference in the community and on its dwelling citizens. In the Lake County area of Illinois one academy and instructor is doing just that.

The owner and head instructor of “Fit 2 Defend” is Coach Scott Gave.

Who is Scott Gave?

For over two decades Scott Gave has dedicated his entire life to Martial Arts, transforming him into the man he is today. To assist with building confidence, Gave’s Martial Arts journey began at the age of 12, training out of the Chicago Karate Academy in the practiced field of Taekwondo. Evolving in skill and character, it wouldn’t be long before the now TKD black belt found himself in a leadership position as an assistant instructor at the age of 15, which later progressed to the position of head instructor two years later.

Eager to learn more his journey would take him to Northshore Academy (NSA), as he would continue his Martial Art studies and take on his newly hired role as the head instructor of their youth program.  At NSA Gave would be exposed to a variety of Martial Art systems ranging from Jeet Kune Do, Kali, to Shooto Wrestling. It was also there where he would be introduced to Brazilian Jiu-jitsu by Scott Goddard in 2008, all while teaching and taking care of his family.

At this point in time Gave had gained vast expert knowledge in various Martial Art disciplines, helping businesses grow, trained with some of the best instructors in the Midwest, and made a positive influence in student’s lives. All of this experience would prove to be a great asset in his next life challenge. After a ten year venture at NSA, Gave was ready to make his next move, which found him fulfilling his lifelong dream of opening his own Martial Arts academy, “Fit 2 Defend” on June of 2015.

BJJ Legends: How did the making of “Fit 2 Defend” come about?

Scott Gave: After spending 10 years at Northshore Academy, it was time again for me to make a change. I found a “Core Martial Art & Fitness (TKD School) that offered me the opportunity to implement my business model and program into their studio. I took on this opportunity, while continuing to teach a few classes at Krav Maga studio and work a morning factory job. I worked 14-hour days for 2 years. After 2 years of this grind, I went to the Krav Maga studio owner and asked if I could implement a Youth self-defense program at their facility, which is where Fit 2 Defend Academy was born!! About a year later, the owners of the Core Martial Arts & Fitness sat me down and said “You have helped us grow our business; so we want to give you the opportunity to start your own business in our facility. This is where Fit 2 Defend Academy opened its second location focusing on Adult & Children Brazilian Jiu-jitsu. This was a very exciting and scary time in my life because I now got to focus solely on teaching and running my own academies.”

The biggest challenge many gym owners face operating an academy is building a rapport with each of its members, assisting them with their goals and providing great experience every time they walk through the door. Coach Gave and staff’s teaching enthusiasm is the reason behind the continual growth of the “Fit 2 Defend “and its satisfied students.

Fit 2 Defend has a unique youth program, instructing children ages 6 years old and up. For any child participating in Martial Arts they face many challenges in their early life development. However, they also have the opportunity to unlock their full potential thus raising self-esteem and confidence to excel in their journey as martial artist and in life outside the dojo. To assure both sectors are being accounted for Gave has constructed a program that not only requires youth students to learn techniques, but also work on character traits to be eligible to excel in stripe and belt rank. The development of the child at Fit 2 Defend, also include collaborations with the parents to ensure future success. This formula has seen the flourishing of many alumni students, as they have gone on to attended college, operate their own successful businesses, and even become leaders of Fortune 500 companies.

BJJ Legends: What is the strategy you use in assisting children build their confidence and self-esteem?

Gave: I think it is very important to guide your students to have confidence in the proper areas. To be successful in building ones’ confidence or self-esteem, we must first make them realize their current strengths. Once that is established we must figure out a short-term goal, and then figure out the necessary steps for them to take in achieving their goal. Once a student can see that they can achieve even a small task, they will be more willing to take on bigger challenges.

I believe that is why Martial Arts training can be great, because those several little improvements that students see each class, we can use our influence to encourage them on their improvements in achieving their goals.

Just because there is a heavy focus on the children’s program, that doesn’t exempt potential adult students in reaping the benefits of training at Fit 2 Defend. At its Libertyville location Fit 2 Defend offers adult class in Brazilian Jiu-jitsu and Self-Defense. In an effort to accommodate all its members Gave’s adult program supports everyone from the recreational grappling enthusiast , the individual wanting to get in shape, to the aspiring competitor looking to challenge themselves in tournaments. Now training under Jeff Serafin of Serafin Academy (Team Jackson McViker) Gave and his students have achieved great success medaling in local and international tournaments. In addition, the adult squad is an avid contributor to the Illinois community hosting various charity events, such as bowling functions supporting “Save a Pet” and food drives for “Feed My Starving Children”.

“The Adult program supports recreational and competitive students.” Gave said. “We have found that as long as your academy atmosphere is built around helping each other reach their personal goals, we can easily weed out the prospects members that aren’t a good fit for the academy. We also host charity events to come together and work in our community to give back. This helps everyone feel that they are an important part our team.”

The burning desire to make a difference in student’s lives has made “Fit 2 Defend” what it is today. Using his years of knowledge and experience in Martial Arts there is a continual goal, a message that Gave works to instill in his students in taking on the daily challenges on and off the mat.

Scott Gave is far from done, as he looks to accomplish more goals on an academic, personal, family, and business level all while continuing his selfless service to the Lake County area in Illinois.

“What inspires me to continue on this journey is to empower the masses of the benefits of Martial Arts, and to make people realize the potential they have within themselves. Not only do I want to empower the masses, but I also want to give my team members and surrounding academies owners the knowledge and tools to grow their academies so they can make enough income to live a healthy lifestyle and impact their members in a positive way.”

An Interview with Carlson Gracie Jr.

Teaching as a Purple Belt