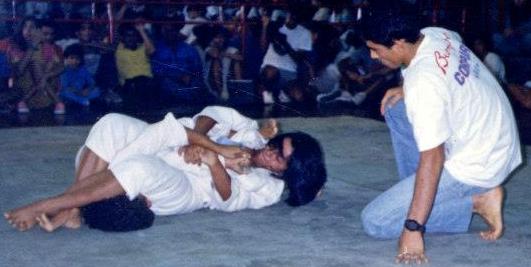 In the words of Portuguese poet, Fernando Pessoa, “Everything is worth it if the soul is not small.” The day she was born, no one could know what a major impact Professor Yvone Magalhaes Duarte, First Female Black Belt (1990), would have on the world of Brazilian Jiu Jitsu.  The more you grow in the sport, the more you want to know about the roots of your new found addiction.  BJJ has grown substantially since Professor Magalhaes Duarte received her black belt.  This trailblazer paved the way for today’s women in the sport. Knowing how she did it and the strength it took during the time she did it (mid 70s-90s) should make us all want to leave a more profound legacy for BJJ generations to come.

Early on in her career Professor Magalhaes Duarte recognized developing her own unique approach to her matches was crucial to ascend in the sport.  She trained as often as possible.  She was a petite fighter and was explosive.  Her ambition was as admirable as her drive noting “during different periods Jiu Jitsu was the major thing in my life. I have always wanted to fight! I want the honor to teach my grandchildren.” She originated from the academy of the renowned 9th degree red belt, Master Osvaldo Alves. Diversity at this academy ran the gambit from professional fighters to philosophers.

Rio was a melting pot and anyone willing to take up the noble art of Jiu Jitsu was welcomed with open arms.  Once Professor Magalhaes Duarte received her black belt in October of 1990, one part of her journey had come full circle.  She had become THE FIRST…The first of many to come.  After receiving her black belt she became an instructor at the Police Academy, her classes grew immediately.  Fast forward to the present and Professor Magalhaes Duarte is still as dynamic as ever. She makes her presence known fighting for sociopolitical and economic deficits. “My fights today are for others. I am working and fighting for human rights. I fight for the demarcation of indigenous lands. I fight for a society without inviolable refuge!” These words for are explosive and indicative of why the professor has become such a major pioneer not just for women in Jiu Jitsu, but for the world of Jiu Jitsu.  She displays passion for what she loves. She is a pioneer full of grace, poise, and knowledge that hopefully future fighters will aspire to.

Professor Magalhaes Duarte has nothing but fond memories as a competitor, no regrets indicating “my Jiu Jitsu victories are now good memories; I have given my contribution. The principles of this fight are still with me and I want to keep sharing with others.” She currently resides in Rome and lucky for the BJJ world, there are no signs of her slowing down.  If you want to find out how far a culture has come, you need only look to its foundation.  In order to know where you are going, you must remember where you have been.  Our history can do one of two things for us.  It can provide us with building blocks for future success or condemn us to a perpetual state of arrested development.  The path is ours to choose.  This pioneer has blazed the way from the CBJJE to the IBJJF, who’s got next?