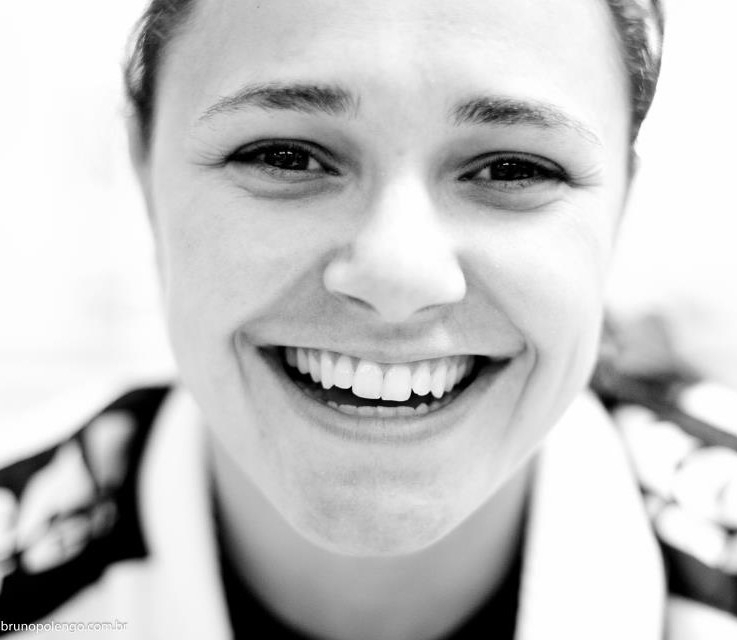 BJJL: First, I want to get started with your crazy weight classes. You have been super-feather, light-feather, medium-heavy, feather-feather, medium-heavy, feather, light-feather. I have a list from 2007 of all the weight classes you’ve done. Why do you jump around? Are you dodging somebody?Michelle: No. I used to be always light-feather for a long time.BJJL: Light-feather is under . . .Michelle: 118.BJJL: . . . 118.BJJL: That’s too small.Michelle: Yeah, but I’m small. I’ll always be . . . I used to fight light-feather, and then in 2010, I don’t know. I think I started to get old, and it was hard. I tried to go up after this. I changed.BJJL: But all the way to medium-heavy?Michelle: No.BJJL: You must have been huge. That’s 165.Michelle: Yeah. Usually my weight is like 56kilos.BJJL: No.Michelle: Yeah.BJJL: No.Michelle: Yeah, yeah, yeah, 56. Then six months at 57, something like that. In 2010, I had Luisa Montero, my friend. We came to America to compete in awards, and she was really sad because she wouldn’t make the weight. She was supposed to fight light, I think. It was her first year as a black belt. So I said, “Oh, okay. No problem. We go up. I’ll go with you.” So we decided to go together. We talked about close division, but on fitness she lost in the semifinal. Then I made the final.I like to fight in this weight class. I like it, and I can try again in 2012 because one of my friends, Marina Montero, she was fighting as a featherweight for the first time as well, and black belt. She was always feather. So I said, “Okay. We can stay.” So I go up again, and I won. Then this year, probably I’m gonna move again because I have Carlie. She’s a new black belt, and I want her to feel comfortable in the weight class.BJJL: You registered light-feather for this one.Michelle: Yeah, for Pan-Ams. Yes.BJJL: Oh, but for world’s. I see what you’re saying.Michelle: For world’s. Yeah.BJJL: You’re crazy. How much . . . If you walk around at 156, which is ridiculous . . . I can’t imagine.Michelle: No, 56 kilos is like . . .BJJL: Oh, okay. That makes way more sense. I was thinking about 156 pounds.Michelle: No, 56 kilos. What is . . .BJJL: 146, maybe.Michelle: No, it is 130.BJJL: Oh. Okay. That makes way, way, way, way more sense. I thought you were up around 160. Okay. So in order for you to make light-feather on Saturday, that’s . . .That’s real skinny.

Michelle: I am proud of it.BJJL: Yeah, I am too. Let’s see. Good job. We need more women. We need more women taught by women, but those Abu Dabi kids are coming up. Right?Michelle: Some.BJJL: Let’s talk about your teams real quick. When you started, you were Brasa. Then you were Drysdale, and now you’re Check-Mat. How come so many teams?Michelle: I was training for Robert Drysdale. He is my coach since when I started training. He was responsible to introduce and talk about Jiu-Jitsu with me. I didn’t know what is it before.BJJL: You’re Brazilian.Michelle: Yeah, but back in the day, Jiu-Jitsu was not that popular.BJJL: You were in Sao Paulo. I think if you were in Rio . . .Michelle: Maybe. If you don’t follow the magazines, you would never know about Jiu-Jitsu. Yeah, it’s like this.BJJL: What? Now how did you meet Drysdale? Because he’s in Las Vegas.Michelle: Yeah, he’s from America, but he’s half-American, half-Brazilian. His mother lives and owns an English school in Brazil, in my city, and he too. Then I was studying there, and I knew him because she always talked about her son. Then one day, he went for holidays in Brazil because he usually will visit. Then he went to Brazil, and then we met. We were like teenagers, 17 years old. Then we started to talk more on the Internet and everything.I used to do [inaudible:00:12:50] for four years. Then my coach moved to another city, and I didn’t find a place to train. Then I talked to him and said, “I’m looking for something to do. I think I’m gonna do judo.” He said, “No, you should try Jiu-Jitsu. It’s fun. You know? You also can work with takedowns.” I said, “What is it?”Then I went and took a look, and I liked it since the first day. I took a friend, a girl friend, with me. She started training. We started training together. It was fun. I was with Drysdale. He gave me all the belts until 2009.BJJL: In 2009, you broke up, because you guys were boyfriend and girlfriend.Michelle: Yeah.BJJL: When I Googled your name, everything said, “Michelle Nicolini, Robert Drysdale, black belt, Robert Drysdale, black belt.” That must drive you crazy to have your ex-boyfriend’s name attached to your black belt.Michelle: Yeah. That’s why if you go . . . If you notice . . . Before, when you’re together, I never had [inaudible:00:13:55] nothing. Everything came from him. You know? I felt like I was a shadow. You know? Of course, he was famous at the moment.BJJL: He was.Michelle: He won the ACC awards, everything, and I was just starting. When we broke up, that was the more important thing that happened for me, to go back to Brazil and start doing my own things. Then I started to build my own name without Drysdale. He helped me until that. Then after, I had to do my own things.BJJL: You’re doing well.Michelle: Yeah.BJJL: Eight world champions.Michelle: So that’s why we move a lot of teams, because he always was looking for better teammates or a place to train. So we worked with Brasa, and then we moved to Check-Mat. Then we didn’t move to Check-Mat. I just followed Drysdale. We moved to Brasa, and then Brasa in 2008. Then I stayed with him. Then when I moved back to Brazil, I didn’t want to be with him because we broke up. We got, not divorced . . .BJJL: It’s a breakup.Michelle: Yeah. Then I started to train with [inaudible:00:15:18].BJJL: Yeah. [inaudible:00:15:20] is Jiu-Jitsu.Michelle: Yeah.BJJL: Beautiful.Michelle: [inaudible:00:15:25] was the best guy I know, I can have ever met. He’s amazing on the mat, outside. He’s wonderful. [inaudible:00:15:35] used to teach in Sao Paulo, and I was living in Santos. So that’s why I started training with Gavaka [SP], because he has a school there. 2013, Gavaka left the team, and then I keep training at Check-Mat with some other black belts [inaudible:00:15:51]. We are all together.BJJL: Now a lot of women . . . I heard them complain at the seminar, and I wanted to strangle them. I only have guys. I only have guys. I only have guys. There’s no women in my academy. We grew up with only guys. What if you walk into an academy, and all you see are white belts? Do you not train that day?Michelle: I do train. Yeah, I do.BJJL: Can you learn from a white belt?Michelle: I think so. You know? You’re always learning from everybody. It’s not like everybody is the same. They have talent. You cannot close your eyes to this. Just be more conservative to not get hurt, because they are more excited when they go with a girl. You know? Even with this kind of grip, you have to manage how to not hurt yourself. I think you always have something.BJJL: What if you walked into the academy, and everybody was heavyweight?Michelle: I would train. I like it.BJJL: What if you got to choose two doors? This door had all heavyweights, and this door had all white belts. Which door would you go to?Michelle: Heavyweights.BJJL: Let’s talk about who you chase and who chases you.Michelle: I think who chases me now is [inaudible:00:17:29]. Yeah?  I’m waiting my moment with . . . Let’s see.BJJL: Have you fought Leticia?Michelle: I fought Leticia in 2009. She won by advantage, but that was the . . . Yeah.BJJL: Yeah, that was.Michelle: The year that I was kind of . . .BJJL: In transition.Michelle: . . . in transition.BJJL: In transition.Michelle: Yeah, but it was a good fight. I fought Leticia. I think . . . I want to get my revenge with Riadane.BJJL: I don’t know her.Michelle: That’s because . . .BJJL: Oh, that’s the one that’s coming up this weekend.Michelle: Yeah. What else? Yeah.BJJL: Okay. That’s super fun.