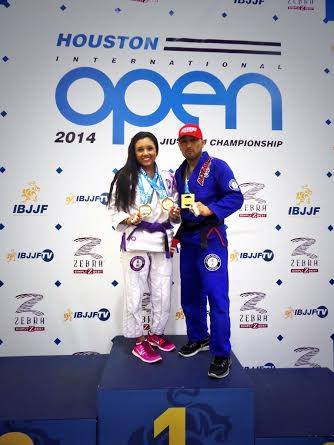 Patrick Lencioni notes, “great teams do not hold back with one another. They are unafraid to air their dirty laundry. They admit their mistakes, their weaknesses, and their concerns without fear of reprisal.” I recently had the pleasure of interviewing Professor Danny Alvarez and his daughter Danielle of Alvarez BJJ. Their team epitomizes the type of synergy Lencioni references above. You could be a newcomer to BJJ in Texas and you would find out soon enough about the dynamic duo and the rest of the Team Alvarez Superfriends.

A unique combination of humbleness and tenacity is what makes Professor Alvarez’s transcendent style of leadership so effective. A team’s cohesiveness depends on the attitude and guidance of its leader. This 15 year BJJ veteran has wrestled and done Judo but this sport is his calling. “No other sport or martial art has given me the fulfillment that Brazilian Jiu Jitsu has. It has really taught me about respect and giving back to others. Its all about how you treat and help others grow as you do.” A sentiment I personally share with Professor Alvarez.
Team Alvarez is driven by an unyielding force at the helm. After 11 years at General Motors, Professor Alvarez decided his heart and soul belonged to BJJ. He left behind the security and stability of a well paying job to prove he was ready to push his team to new heights and that in itself is an admirable trait in a leader. He recognizes what an asset he is to his team as their guide and wanted to give them his undivided attention. Under his expert tutelage some have already surpassed him as competitors at their belt levels.

Up to this point Professor Alvarez has no regrets. A large part of his success is his ability to consistently impose his game upon his opponents. Win or lose according to the Professor “making mistakes is how we improve and get better.” The moment he is the proudest of to date is his triumph to become the IBJJF Masters Worlds 2012 Champion. He defeated World Champions Rodrigo Pagani (Saulo Riberio JJ) and Bernardo Pitel (Nova Uniao). In just six years Team Alvarez has become a force in Texas and the BJJ world and they are hungry for more. Professor Alvarez was sure the moment he started BJJ that it was his destiny, Danielle’s journey to The Promised Land was a bit rockier.
Her first brush with BJJ was around 7 or 8 years old and she rebuffed the sport. She went on to take up other athletics. At 14 she was reintroduced as a method of self defense and again she was not thrilled. Each time there was a practice to be had; Danielle was in attendance full on pout. Once her skill set grew and some confidence along with it, a slight transformation came about. She began to like BJJ a little more and she began to attend more classes sans the pout. At her first competition, NAGA May 2009, Danielle took silver in NOGI and gold in GI. One would think this was the turning point for her and she finally found her way in the BJJ world. I have news for you, after that competition in Dallas; she vowed never to compete again. It took another year before Danielle set foot back on the mat competitively and she has been a hurricane in the BJJ world ever since.
When she sets foot on the mat her level of composure is uncanny. “Whether Danielle is in a good position or a bad one, I never stop talking to her. It’s like playing a video game, she listens so well. I have the controller and Danielle is the character on the screen doing what I am asking her to do,” states Professor Alvarez. I don’t know if it was luck or what but I can say I was fortunate enough to be a part of Danielle’s greatest moment to date at the 2014 Women’s Regional Championship in Denton, Texas. She fought her way through some tough competition to end up in the Super Fight Finals with the Premiere Black Belt in Texas, Professor Fabiana Borges of Gracie Barra BJJ. To this day it is the best match I have seen. Clearly Danielle was the underdog as the Purple Belt going against a Third Degree Black Belt. Both competitors were matched sweep for sweep during this 10 minute match. The auditorium was full of thunderous screams, stomps, and applause the entire time. The match ended in an 8-8 tie. Danielle won by advantages. The look on her face as well as Professor Alvarez’s face was absolutely priceless.

Alvarez BJJ is a powerhouse in Texas. It is undeniable that the success of this team is due to the leadership provided by 2nd Degree Black Belt Professor Danny Alvarez. He has a clear vision for his team and in its six short years of existence this team is hitting its marks. He has a goal to be the best competitor in his division, with the level of unwavering commitment he displays, not a problem. Danielle may have had reservations initially but she has resolved all those issues and her path is clear and her future is bright. She currently represents Texas very well and at the rate she is going her goal to be the best female competitor is not too far off. Alvarez BJJ has raised the bar for us all and Professor Alvarez has no intention on stopping until his team is the best not just in Texas but one of the best in America. This may seem like an overwhelming task but when you are hungry like a wolf, you will make the earth around you quake while in relentless pursuit of your dreams and there is absolutely nothing wrong with that.
Find out more about Team Alvarez at:  www.alvarezbjj.com
Tags: alvarez bjj, bernardo pitel, danielle alvarez, danny alvarez, ibjjf masters worlds, rodrigo pagani