Being a fan of MMA it is common to have a 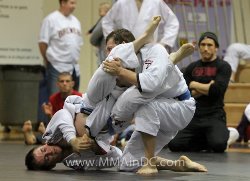 n individual that we look up to. Although these iconic figures inspire us to peruse a particular direction in life, not known to us there are heroes that have made a strong contribution to society, out side the sport of MMA.

U.S Serviceman,  Soldiers have been labeled as some of the greatest heroes of our time for their commitment and sacrifice for  our country. Some of these individuals you can find training on the mats in various BJJ and MMA schools. In this article BJJLegends showcases some of the soldiers that train in BJJ and MMA.

[social][/social]Robert Kristopher Moe is a navy serviceman out of the USS IWO JIMA LHD 7 unit who was born in Ocean Springs Mississippi and now living in Virginia Beach. He has served in the navy for 4 ½ years and has been deployed two times to the Gulf of Aden/ Mediterranean. He started jiu-jitsu when he was in navy C school in VA beach which he instantly became addicted to it, even testing his skills against other marines that had their own martial art programs. Since his start in BJJ while training at Linxx BJJ in VA Beach Virginia, home of UFC featherweight Mackens Semerzier Robert (Kris) has achieved major success in the grappling circuit winning tournaments such as the US Grappling event, The Good Fight, along with many other titles. His future goals are to compete in the highest grappling level, get his black belt, and become an instructor.
[einset][/einset]

Brett Cottrell is a marine out of Camp Lejeune located in North Carolina. As a 4 year marine, Brett has served his country from 2005 to 2009 touring the dangerous grounds of Iraq to being apart of  a special marine expedition traveling to place like Kuwait, Somalia, and Greece. He was introduced to grappling while in the military during his basic boot camp training through his progression into the infantry unit. After leaving the military Brett decided to continue his grappling experience. Now training at Omoplata BJJ under Dan Faggella, Brett continues to excel in his grappling venture placing twice in the no-gi division at NAGA. Brett hopes to continue his grappling experience and to try out some gi tournaments in hopes of moving up the ranks.

Tough, fearless, and always looking for a challenge hailing from Madison WI, and currently residing in Oxnard CA  35 year old Todd Templeton is a former Marine that has served his country for 8 years (4 active/ 4 inactive reserved). As a member of the 1st Batillion 5th Marines Division, Todd has embarked on many journeys as a Marine from the post Desert Strom era to being apart of the Marine Expeditionary Unit. He was later introduced to grappling/MMA in 2006 after watching the UFC, it inspired him to join a local gym and since that time has never stopped training. Now training at Paragon BJJ under Ricardo “Franjinah” Miller while maintaining a full time job and being a father of three, Todd is making the best of his experience placing in many grappling tournaments and even becoming a pro MMA fighter. His future goals are to get his purple belt in BJJ and continue to expand on his MMA career.

Born and raised in central New Jersey and now residing in San Diego, Ca 26 year old Bo Francy has always been an individual that has been motivationally driven. Bo first taste of grappling was in middle school while taking up wrestling. As time progressed after graduating from high school he later joined the United States Navy, where he got the opportunity to travel the world 3 times. Having been in the Navy now 7 years, he has advanced

through the ranks faster than most.  As a Second Class Petty Officer in the Navy, he is responsible for 30 junior sailors to include there physical readiness, basic military training, and basic combative. While severing his second tour in the Navy, he was introduced to Jiu Jitsu and like wrestling; he fell in love with it. Now training out of Gracie San Diego BJJ under Royler Gracie, Regis Lebre & Johnny Faria, Bo continues his grappling experience placing in many tournaments like Mundials, US Nationals, and Grappling X in hopes of one day becoming a BJJ world champion. In addition to being an active competitor Bo also is a writer for various websites and is the owner/creator of everythingbjj.com which is a website that serves as a one stop destination site for all your Jiu Jitsu needs.

Chris “The Exorcist” Price is a marine out of Camp Lejeune’s 1st battalion/2nd Marine Division. As a 4 year marine, Chris has served his country from 2001 to 2005 taking part in Operation Iraqi Freedom. After his departure from the service in 2005, he got his first taste of MMA, when he was invited by his friends as a spectator to a local MMA event. At the event there was a fighter that did not show up for his fight and shockingly Chris volunteered to be the replacement in the fight and since that time he never stopped doing it. As a MMA fighter Chris has accumulated an impressive record of 18 wins with only 3 losses and has even fought in UFC on two occasions. Chris has also done well for himself in BJJ tournaments, winning tournaments such as the EGO tournament and Corral’s Combat Championship. Now training at Team IBJJA under James Clingerman, Chris’s future goals are to continue his MMA career and one day get back in the UFC.

Brandon Magana is a 30 year old MMA fighter from Lakeport, Ca who now resides in San Diego, ca. Brandon was introduced to grappling when he started wrestling in jr high which he continued through high school. As time progressed he later joined the marine cor. As a member of the Reconnaissance Marine while stationed with the 1st Recon Co/Bn and 1st Force Recon Co, he has spent 8 years serving his country. He has done combat deployments to Iraq conducting CBQ missions with recovery of high value targets, reconnaissance and surveillance, mobile and Static security operations, and VBSS operations. In 2004 he later started training full time with Charlie Kohler at the San Diego Fight Club and had his first fight in 2005. The same feeling he had fighting in the ring resembles the same adrenaline filled feeling he had before making entry into a hostile target in Iraq, which makes competing natural to him. In his time in grappling he has placed in major tournaments like NAGA, Grapplers Quest, and IBJJF events. As a pro MMA fight Brandon has accumulated an impressive record of 6-2 record with fights in various organization like Total Combat, King of the Cage, M1, and Strikeforce. Now training BJJ with Rodrigo Medeiros as part of the BJJ Revolution Competition Team and  at the San Diego Fight Club, while teaching a kids program , and working as a civilian contractor for the US Navy, teaching defensive tactics and combat skills, to specialize units, Brandon continues to strive to become a better martial artist and further his experience by competing as much as he can in jiu-jitsu and MMA.

Jared Dopp: Quest to the Gold