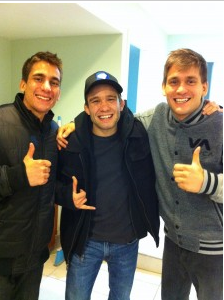 Dan Faggella is a BJJ Academy Owner, No Gi Pan Am Champion at 130 pounds, and recognized expert in the area of leg locks. Dan writes for Jiu Jitsu Magazine, Jiu Jitsu Style, MMA Sports Mag, and more – find more of his leg lock articles and resources at www.BJJLegLocks.com.

In sports, it’s a common place to see brothers in the same league or same sport.  Off the top of my head, there are countless brother combinations I can think of:

I can go on and on with this list.  However, I’ll focus on one set of brothers we all know too well; Rafael & Guilherme, The Mendes Brothers!

From the list above, it’s not farfetched to believe that a family can produce a set of talented children who excel in a given sport.  With the Mendes brothers, they are no exception.  Their accolades and career records are outstanding when you look at the grand scheme of things.

The two combine for an eye popping 16 Gold Medals, two silver medals and one bronze medal.  A good amount of these medals have come from Rafael, who is widely considered the best grappler in the world today.  Rafael has claimed 11 gold medals in countless elite level competitions such as Abu Dhabi Combat Club, Brazilian Jiu-Jitsu World Championships, Pan American Championships, Brazilian National Championships, World Cup & the NoGi World Cup – its a good idea to check out the articles over at BJJ.org and the Jiu Jitsu Lab if youre interested in getting a deeper insight to the Mendes brothers strong passing game.

Both Mendes brothers hold their Black Belt in BJJ under Ramon Lemos are represent Atos Jiu Jitsu, and also run their own gym out in San Diego, California.

To Compete or not to Compete; That Is the Question

In combat sports, many brothers have vowed never to step into the cage with one another.  Joe & Dan Lauzon, Jim & Dan Miller, Big & Little Nog, Nick & Nate Diaz; there’s a long list of brothers that will never compete with one another, despite having that sibling rivalry when growing up.
For the Mendes brothers, this is not a problem.  It’s a common occurrence that these two are the best grapplers in the field, and have to face one another at some point.  The two, understanding it’s only a sport, wage war. And they are certaintly “strategic” in their training approach, ranging from identifying areas of focus and building practice schedules- theres a more detailed article about their training strategies over at http://scienceofskill.com/the-mendes-brothers-on-improving-your-game/

Mentally it may be different compared to the UFC brothers; the Mendes brothers don’t have to worry about physically striking their opponent, which is an understandable road block for some.  These guys roll and go at it virtually every day at their gym, so why is it any different on the mat in front of more people?
These guys are two elite grapplers that just show happen to share the same blood line.  Job well done, Mrs. Mendes!

Perfecting the Kimura with Sergio Gasparelli

Why and How to Keep a BJJ Notebook