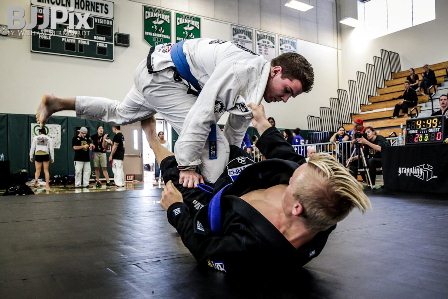 Every fighter that has ever graced the mat carries with them a primary philosophy that guides them along their endless journey. With only two years of participation in the sport of Brazilian Jiu-jitsu Clark Gracie Blue belt Harryson Franz has already developed a set of principles which has benefited not only his athletic pursuits but also his life outside the gym.

With eight years of prior Kickboxing experience to his cred Franz’s transition to the art of grappling offered the young prospect a new exploration of growth in his quest to becoming a better fighter.

“After 7-8 years of training I became increasingly interested in competing in the sport of Mixed Martial Arts,” Harryson told BJJ Legends. “My coaches at the time, while fully supportive and confident in me if the fight stayed standing, knew that I’d need to have some kind of ground game to be truly ready to compete. So I left kick-boxing when I was 19 to focus specifically on Jiu-Jitsu and ended up falling in love with the sport.”

It wouldn’t be long before this passion for his new found hobby would supply Franz with the essential components necessary for improving many areas of his life. Through the various scenarios he has come across each event has given Harryson a clearer perception of what this sport’s original intention was for its participants.

“You have to understand that Jiu-Jitsu is more than just a sport or a self-defense system. There’s a lot more to it than just learning different techniques on the mat and winning medals in competition. What Jiu-Jitsu really is at the end of the day, is a vehicle to better your life in every single aspect.”

In order to understand Franz’s philosophy you have to take an in-depth look into how the sport can positively change an individual. From a training standpoint its main focus centers on a martial artist’s development in physical, technical, and mental prowess. In order to advance in these sectors one must diminish their ego if they ever hope to uncover the infinite potential buried within them.

Taking this mentality into each of his jiu-jitsu practices Franz has been able to keep an open mind about the flaws in his game which has only elevated his evolution as a grappler. Even with dealing with the strenuous task of balancing a full time job and being a full time college student these obligations have done little to derail his jiu-jitsu ambitions in growing as a fighter.

“We all want to be good at this sport, but if you’re always trying to pull a “tough guy” act your progress in Jiu-Jitsu will be incredibly slow,” he said. What’s important to remember is that even when you’re getting absolutely destroyed on the mat in training, that’s what makes you better. For me personally, it motivates me when I get “rolled up” on the mat, because it’s like getting a free list of things to work on and really shows what I need to do to get to the next level.”

Fully committed to his craft it would only seem fitting of Franz to put his skills to the test in competition. Valiantly confronting each opponent through the victories and defeats each battle has helped molded the blue belt to becoming a stronger and better competitor for the future.

These tools Harryson has acquired in his training and competition has allowed the 21 year old to transfer these lessons into his personal life. In Life one undoubtedly is faced with various hardships. Reflecting back on the tough hurdles he has undergone in Brazilian Jiu-jitsu it has aided Franz in better handling the issues he may have to contend with on a daily basis off the mat.

“Our sport is one of the toughest sports you can find and every time you step on the mat to train, you will be forced to face and overcome adversity ,” he said. For instance when you compete and deal with multiple matches of guys trying to do everything they can to take you out, it better prepares you for any struggles you deal with in your personal life. Every conflict (personal or otherwise) that comes up for me now, I simply remember my training, stay calm and wait for the right time to act, just like I would in a Jiu-Jitsu match.”

No matter what predicament he has to face the Brazilian Jiu-jitsu Philosophies of Harryson Franz has carried him a long way in his journey. Whether it is handling stress at work, relationship quarrels, or his pursuit of becoming a BJJ world champion, Franz’s dedication and determination will allow him to become successful on every front as he continues to bulldoze through every obstacle in his path.

Harryson Franz Special Thanks: I’d like to thank my training partners at Clark Gracie Jiu-Jitsu and my instructors: Rafael Dallinha, Brandon Magana and of course Professor Clark Gracie.

Jared Dopp: Quest to the Gold