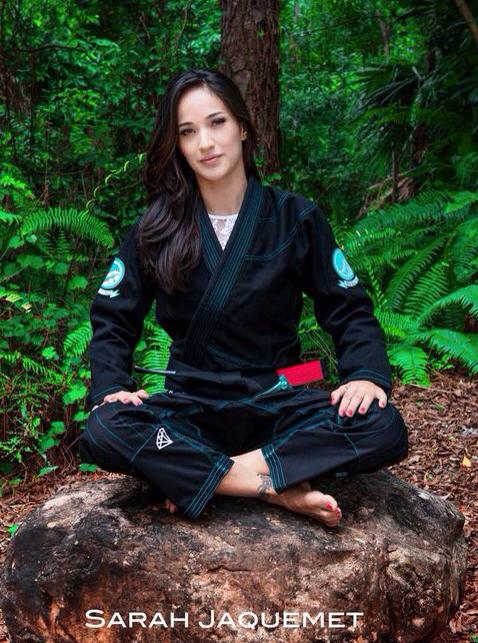 “Not a Phase, Being Tapped is Part of the Game:” An Interview with 2013 & 2014 IBJJF World Champion Gezary Matuda

Gezary Matuda is the reigning (back-to-back) light-featherweight IBJJF World Jiu-Jitsu Champion. At the finals, Gezary (“Ge”) beat Ariadne de Oliveira from team Maestre Wilson in a bracket that consisted of the all-time great Leticia Ribeiro, as well as the talented Nyjah Easton. Ge fights for American Top Team out of Coconut Creek, Florida, having received her black belt in 2012 from Ricardo Liborio.  Her first instructor was Alexandre “Penão” Conceição, a 6th degree Carlson Gracie black belt who is one of the most regarded but underpublicized jiu-jitsu instructors in the world. (Penao was Anderson Silva’s BJJ coach and Stephan Kesting raved about him in one of his blog entries after attending a seminar.)  Born in Curitiba, Paraná, in 1984, Ge and her husband, Katel Kubis, the ATT pro-team Muay Thai coach, moved to the United States in 2009.  They live in Deerfield Beach.

Ge’s demeanor is always bright and friendly. She’s one of those positive, forward-looking people whose expansive personality makes them seem much larger than they physically are. Fighting at 118 lbs., she overwhelms with her brightness. The undershirt she wore at the Worlds was a white tank top by Slept Fightware with a large red-lipstick kiss imprint on the front and the words “Don’t let the looks fool you!” on the back. Ge and Katel are very good-looking.  They seem like they were paired on purpose for style magazines. As if life wasn’t unfair enough for the rest of us, they can both destroy another human being in about five seconds: Katel has a knockout highlight reel, and Ge has an arm-bar one floating on the web.

Perhaps because of the striking influence (not just from Katel, Ge was originally a Muay Thai fighter), her game is an intense assault on your senses, as if possessed by the demon of speed.  Standing, she goes for takedowns, preferring to shoot in.  Even when she pulls guard, she goes for an immediate tripod sweep, not letting her opponents rest mentally at any point.  She has talons for grips and is relentlessly throwing submission attacks and wave after wave of sweeps.  Her motor revs at the redline the whole match.  She forces you to reach her intensity, both physically and mentally.  After my encounters with her, I have always left with the clear thought: this is what a world champion looks like, acts, and feels like.  Her warm up drills turns legs to jelly.

Aside from her wins, Ge is most proud of and happy whenever she sees a flourishing women’s jiu-jitsu program.  She is a strong advocate for women in the martial art.  I had the chance to interview Gezary Matuda last week.  I was extremely impressed with her positivity that’s measured by her understanding of the difficulty of the sport.  Below, she gives one of the best answers to overcoming the “tapping out phase” all Jiu-Jiterios encounter when they first begin.

1) Gezary, congratulations on your amazing win. I’d like to start by simply asking how does it FEEL to be the champion? What sacrifices did you make and how did your family, teammates, and sponsors help?

It’s magical to see your dream come true! I was beside people that were with me all the time from the beginning of camp, and then we got to celebrate together at the end, it’s priceless!

This is the result of a lot of effort, dedication, and hard work with my team. This couldn’t be possible done alone. I feel blessed for having with me my coaches, teammates; all of them helped me by not making my training easy.  It didn’t matter if I cried, they made me go beyond my limit.

Also my sponsors Shoyoroll and Slept Fightware that believed in me, I am glad to have them support me.

2) When you were a white belt, did you envision becoming a multiple time world champion across all your ranks? (Gezary is a 5-time champion: 2 at black, 1 at brown, 1 at purple, and 1 at blue.) Who identified your talent early on and how did that person motivate you to work hard for the next ten years to reach where you are today?

When I was a white belt, I used to watch the girls that today I have the honor to fight at black belt.  I always wanted to fight and my dream was be a Black Belt World Champion! And now I am, twice! My first teacher was Alexandre Penão (black belt from Carlson Gracie). I am so thankful for everything he taught me. He always supported me and put me to fight. At that time there wasn’t a lot of girls fighting in Curitiba and I usually have to fight with heavier girls than me. And he always said, “you can do that, believe!” And here I am 10 years later.  I kept his words in my mind: believe you can do that!

3) How would you describe your game? During the Worlds, how do you maintain focus when someone else tries to impose their game?

My game is the game plan that my coaches set for me at my camp.  I never change what I was trained to do. If I can’t do it the first time, I keep going and adapting until I can put everything in practice. I don’t give up when my opponent imposes their game. I keep my game plan until the last second of the fight!

4) Can you give your thoughts on the two major rule changes this year? (The 20 second double-guard pull and the knee reap rules.)

I agree with the new rule of double pull. The fights got more dynamic and the advantage point encouraged the fighters to rise. I think these changes are important to Jiu-Jitsu’s evolution for competition.

5) When you teach, what is your advice to white belts to get them through that phase where they are being “tapped” by everyone?

I believe that’s not a phase. Being tapped is part of the game. It’s a sign that you’re learning! Look at the bright side. This happens at sports and at life, too. Jiu-Jitsu is selective, the most dedicated are the ones that keep going. I identify with Rocky’s phrase: “It’s not about how hard you hit, but how hard you can get hit and keep moving forward.”

6) Finally, what advice do you give to women Jiu-Jiteiras, especially beginners, to keep them in Jiu-Jitsu?

I would love to see even more Jiu-Jiteiras on the mat! Girls have a lot of fun. Keep on training and don’t give up the first time it becomes difficult! Talk to your teacher, and make your goals clear. If you’re thinking about competing, don’t think it will be easy! You’ll never see how far you can go if you give up!

Thank you, Aiseop and BJJ Legends, for the opportunity.  I am very happy to have done this interview.

Gezary Matuda is available for workshops, seminars, or camps. She is a highly regarded teacher.

She gratefully accepts inquiries through:

Inspiring Story of Jocelyn Chang, a Black Belt Who Fought and Beat Cancer