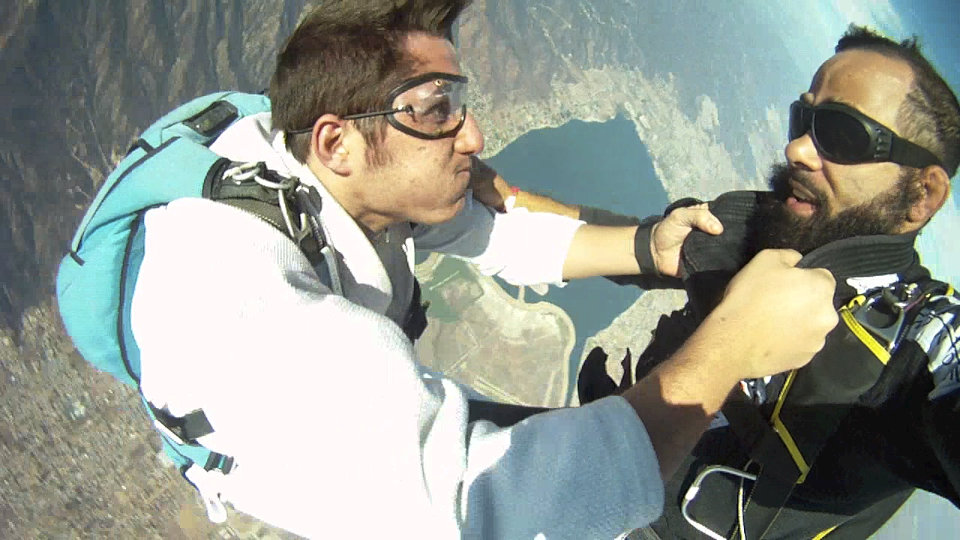 Hey Daniel (Daniel Rodriguez, aka DaRod), this is Kris from BJJ Legends, Jiu-Jitsu Magazine, John Lamonica introduced us at the Pans. Your the guy who do the crazy sky jitsu videos. Will you do a little interview with us? We’ve got some questions.

DaRod: Sure, yeah, Hello! So just a little back story on the birth of Sky Jitsu.  I met George last year when he moved to LA from Florida.  He was looking for a Jiu Jitsu gym to train at and found us here at Street Sports in Santa Monica.  That very day we also found out that we both had an interest in skydiving as well.  I had already over 100 jumps and George was at the beginning stages of learning to fly solo, so it was funny that not only was I giving him jiu jitsu lessons but skydiving tips as well.

Every September, there is a sky diving boogie at our home dropzone in Lake Elsinore called Chicks Rock.  In addition to a weekend of skydiving, they have a costume party so me and George brought our gi’s for the party.  The next morning we decided to skydive with our gi’s on and try to perform a technique in the sky.  Sky Jitsu was born.

BJJ: Where’s the camera? What kind of camera are you using?

[social][/social][bjjad][/bjjad]DaRod: The camera is a Go Pro HD Hero that is wrapped around my wrist.

BJJ: How much time do you have while your flying to pull off your technique?

DaRod: The free fall time varies depending on our body position but it’s usually around 40 seconds before we have to get away from each other.  In skydiving, it’s important to create separation before we deploy our parachutes.

BJJ: I really wanted to straighten your hips in the flying triangle so you could get a nice figure four, but then figured if you could have you would have, being a black belt, so why couldn’t you?

DaRod: Haha, it’s good to know you’re as much of a perfectionist as I am.  My particular situation was pretty difficult because not only was I performing a technique but I had to mind the camera angle and make sure I maintained awareness of my altitude as well.  The first time we attempted the flying triangle, I didn’t even realize that my ankle wasn’t behind my knee because I wanted to make sure we were both in the frame.  Ideally, I’d like to get someone else to fly the camera while me and George perform the techniques, then I can use both my hands.  =)

BJJ: How do you practice your flying moves?

DaRod: Doing an armbar is easy on the ground, but in the sky, both people need to cooperate together to pull the move off right.   George and I try to skydive as much as we can but if we can’t jump we’ll go to the wind tunnel to practice.   The most important thing is just learning to fly your body and returning to a stable position if things don’t work out.

BJJ: How many jumps have you made?

DaRod: Right now I have a little over 300 skydives under my belt, around 100 of those with being a wingsuit.  George has around 50 jumps.

BJJ: Are your jumps free/sponsored?

DaRod: The flying armbar wasn’t sponsored but we got a lot of publicity from that video.  The flying triangle was sponsored by MMA Outlet and Lamonica’s Pizza.  Hopefully, we’ll get more interest in our project in the future and more sponsors will come.

BJJ: Are you or your partner ever in any danger?

DaRod: Of course not, we’re just jumping our of a plane.  =)  But seriously, with the experience between the two of us, it’s pretty safe to pull off.  We go over the techniques several times on the ground and try to prepare as much as possible to pull it off right the first time.

BJJ: What techniques do you want to do that you haven’t tried yet?

DaRod: I’d love to try a flying omoplata, some back attacks, and leg locks.

BJJ: Was poor George Abrao a sky diver first or a BJJ player who was drug into this?

DaRod: Ha, nah he was definitely willing and able.  Actually he even moved up in rank because he was a white belt when we shot the first video and a blue belt in the second.

BJJ: I think id be fun to see a helicopter sweep and a omoplata, possible?

DaRod: Yea I think both are possible.  The helicopter sweep would be awesome!

BJJ: Who in the world would you most like to mid air armbar?

DaRod: I’d love to get one on my professor, Renato Magno.  I’m still trying to convince him to come jumping with us.  How bad can it be? Both George’s mom and my mom have done it.

I’m sure people are going to want to sponsor you, jump with you and or train with you, how do the get a hold of you?