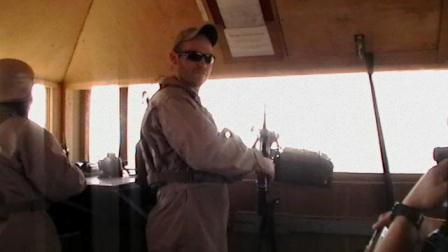 Whether it is facing a tough opponent, learning a new move, or struggling with our progression it is a common occurrence as martial artists that we are faced with difficult challenges. However, it is how we stand in the face of adversity, which displays the content of a true person’s determination to overcome obstacle.

When looking at an individual like Anthony Sanza only one word comes to mind, FEARLESS. A disabled Iraq war vet, former MMA fighter, father and husband; from his early health problems as a youth to his challenges he has face as a martial artist and in the military, to his unfortunate current battle with stage four cancer. Sanza is an individual that laughs in the face of danger and tackles any problem head on striking it down with a heavy knockout blow.

[social][/social]Born in Napa, California, Anthony’s first life threatening battle would transpire at the age of 14 in the form of undergoing heart surgery due to small hole in his heart that would not heal which he was able to overcome. Later getting involved in martial arts, he started off as a karate practitioner under  Alan Reyes  where he went on to participate in over 50 Full Contact Karate tournaments in which he was able to win the majority of the ones he entered. Later getting involved in boxing and kickboxing he went on to obtain the same success facing each obstacle that stood in his path in his ascent to being ranked # 2 in the nation in his weight class in the IKF (International Kickboxing Federation). Hoping to continue his evolution through his close friendship with fellow training partner Arturo Morales he began his journey as a mixed martial arts fighter at the world famous Cesar Gracie academy in Pleasant Hill, California in 2002 where he would begin his venture into the fight game helping and training with great fighters like the Diaz Brothers including trying his hand at competing in the octagon.

“I helped them become better boxers and they helped me out on the mat, “Sanza recalled. I went to watch a few guys in Susanville, Ca to fight and I was tricked into fighting that night in my first MMA fight. I ended up knocking out my fighter in the second round. Then in the dressing room I was approached by the promoter and asked to step up to 170 and fight another fight that night because one of the fighters didn’t show. With Nick and Nathan in my corner I went out there and knocked the other fighter out in the second round. Overall I have fought about 10 MMA fights and a few smokers.”

In addition to his contribution toward helping out his teammates, Anthony Sanza has also played a major role in his fight against terror and protecting our country. Looking to take a stand against injustice after witnessing  the events that were going on in Iraq , he would go on to join the Army in 2005 were he became a part of the 4th brigade 2nd ID Charlie company 1/38th infantry unit where he exceled up the ranks to become the combative instructor for his company. Later being deployed to Iraq in 2007, putting his life in danger fighting for our freedom he has went on to conduct over 300 missions until he was injured in the line of duty going on to be discharged from the military in 2008.

“We spent a few months there and then moved up north to Baqubah Iraq. I was part of headquarters unit in Charlie Company. I was the third man on the company sniper team and commanders PSD (personal security dismount) team leader. In May of 2008 I was injured sent back to the states. After a few months of Rehab and physical therapy in Washington the army pushed me out on a medical honorable discharge.”

After his honorable discharge, Anthony would go back to a normal life in northern California where he would return to his mixed martial arts training at Cesar Gracie academy while pursuing an academic education at Sierra College in Rocklin, Ca. During this time he would later meet the love of his life, Ashley Banks, who he would eventually marry and go on to have a beautiful daughter name Emma where they would live happily in Roseville, California.

“I returned to CA and started training again withe Cesar Gracie and the team. I was too beat up to continue fighting pro again from the army and getting hurt in Iraq, “he said . I started going back to college and hanging out and training at the Gracie gym. I met my wife Ashley through a friend in Napa and in September of 2010 we got married and had a little girl named Emma. Emma is now 15 months old.”

With all of the challenges he has had to overcome in his life on December 13 of 2011, he would be faced with the toughest encounter to date. After having reoccurring abdominals problems, a doctor would later diagnose with stage four cancer. He has one large tumor and 13 others in his body, one of which is located in his lungs.

“In October I went to the doctors in Sacramento because of stomach problems. They gave me some meds and said it was just a bug. The first week of December I was still having stomach problems and my doctor ordered a CT scan of my stomach,” he said. My doctor had found a tumor the size of a baseball. So a week after Christmas I had a biopsy and they found 12 other small ones and one on my lungs. They said I had carcinoma of an unknown primary”.

Sadly due to his recent start on chemotherapy Anthony has had to drop out of school and can no longer work. But like a true warrior he does not see this as a lost battle and will continue fighting this as he as any other circumstance.

“This all happened very fast and is a very big life changer. I never though in a million years this would ever happen to me. So now I am fighting to stay alive and save my own life. I have a great wife Ashley Sanza and my daughter Emma Sanza who will help me fight to stay alive. They will be the reason I make it through this. The doctors say there are two kinds of the cancer. Germ cell which I have a 70% chance of beating and the other one adenocarcinoma which I only have a 5% chance and maybe 3 to 6 months left to live. I don’t care if it is the bad one. I will fight, fight and prove them wrong and give them the fight of their lives. I don’t know how to quit or give up. I am 32 years old and I will fight and live for the next 68 or more years.”

To show your support visit Anthony Sanza page at
http://www.facebook.com/pages/Anthony-Sanza-Fundraiser/214963455254708