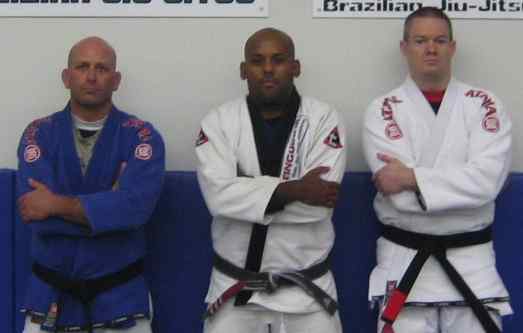 [blockquote]It was an honor for me to graduate these two great guys to the Black Belt. It is supposedly the goal of every BJJ practitioner to be a black belt and it is an accomplishment for those who achieve it  but it is beyond submissions and attacks on the mat. It is about honor, respect, discipline, honesty and loyalty. I am confident to say Justin and Todd are true BJJ practitioner and now they have the mission to represent our martial art. I congratulate them for their accomplishment, it was well deserved. Let’s keep Brazilian Jiu-Jitsu alive and strong.”  – Mauricio “Tinguinha [/blockquote]
The Anchorage BJJ School have been doing extremely well. They are doing a great job spreading BJJ in Alaska. The Anchorage BJJ Academy is the biggest BJJ school in Alaska not only in facility size but in student numbers as well and now their head instructors are putting a new federation to help the growth and promotion of the Brazilian Jiu-Jitsu martial art in Alaska. We all from the Tinguinha BJJ Academy wish good them luck on their new venture.
Tags: TBJJ, Tinguinha

Jiu-Jitsu Expo – Nick Diaz is a No Show!