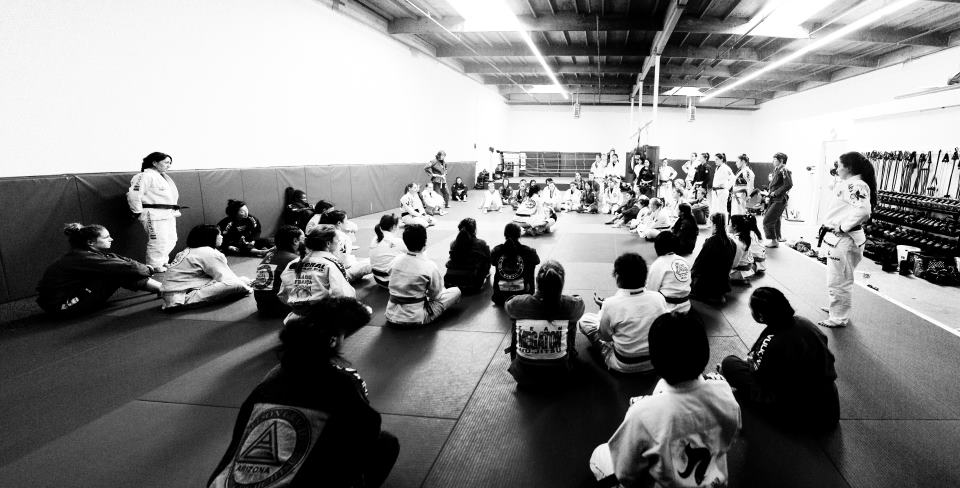 Brazilian Jiu Jitsu is a uniquely universal art. With its broad arsenal of techniques, strategies, and styles, one of the many qualities that makes it so unique is that anyone can learn and make it their own, regardless of size, gender, age, or strength. Because of this, it’s no surprise that a growing subculture in the sport of BJJ is women practitioners.

Of course, women continue to be an unfortunate minority in a predominantly male sport, but that doesn’t stop them from connecting and finding ways to train in the sport they love.

A recent trend in BJJ has become events held exclusively for women. Open mats, tournaments, and seminars have all been on the rise in the past few years, thanks to the efforts of women passionate about the sport and determined to empower others on their Jiu Jitsu journey. One of these women is Mollii Khangsengsing, a purple belt under Eduardo Rocha in Oakland, California. Mollii is the founder and coordinator of the Sweaty Betties, an all-women’s BJJ group dedicated to “foster a positive, supportive, safe, and fun training environment for women in which to learn and practice BJJ regardless of their school affiliation.”

[social][/social]Last year, the group hosted an all-women’s seminar and invited multiple world champion and 3rd degree black belt Leticia Ribeiro to instruct. While initially intended to only be one seminar, an additional one had to be scheduled due to the overwhelming number of registrants. Inspired and encouraged by the unexpected success of these seminars, a similar event was scheduled for December of this year, and plans were laid for a female-only camp instructed by Ribeiro, open to practitioners of all schools and affiliations. Once again, the group reported a great success. Stretching over 3 days, the camp brought over 60 women of all ages, levels, and sizes to the gym in San Francisco, some from as far away as New York, Hawaii, and Canada.

The camp extended for several hours each day, with specific days devoted to Gi and No Gi training. The goal, according to Khangsengsing, was to “place focus on competition training by expanding curriculum in terms of techniques and length of time in both Gi and No Gi.”

After a lengthy warm-up,  participants studied 3-4 hours of technique presented by Ribeiro, who was reported to have a great attention to detail and obvious passion for teaching through her “accessible and humorous” delivery. Sparring concluded each day, where the women were able to use their techniques in a real-time format.

Khangsengsing was pleased with the event’s success, and sees offering more in the future as a way to get women actively involved in the sport. “These workshops help build the BJJ community while offering fantastic opportunities to grow in technical skill,” she says, adding, “I think the networking and relationship building aspect is huge for women.”

Mollii empathizes with other women and feels motivated to be a part of this new trend in an attempt to improve the women’s BJJ community.

“Many of the women studying BJJ are working out in gyms where the teachers and other practitioners are mostly men,” says Khangsengsing. “I know I have had to prove my credibility as a woman in an art form that has been predominantly male. This is changing, and I want to be part of that change and encourage more women to participate. Giving women opportunities to work out with accomplished women teachers like Leticia, who is such a great role model, is awesome. I also think it’s refreshing and supportive for women to have chances to train with other women sometimes. It strengthens their sense of personal empowerment.”

There is something to be said of the benefits of all-women’s seminars. Besides offering the relaxed all-female environment, women are able to learn from successful teachers and mentors, make friends with a shared passion for the sport, and strengthen themselves and the community through empowerment and networking.

As the sport grows, keep an eye out for these events to do the same. Through the efforts of Khangsengsing and others like her, more will become involved, popularity will be on the rise, and women’s BJJ will have nowhere to go but up.

Check out Mollii’s group the Sweaty Betties on Facebook.