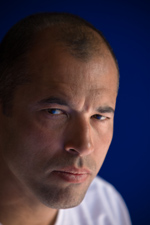 The world of mixed martial arts became abuzz the day the UFC announced the fight between boxing heavyweight champion James Toney and UFC Legend Randy Couture. The bout sparked debate across the internet.

Who would win between boxing and MMA?

James Toney felt confident that his hands would be enough to answer that question.

“I’m here to prove a point so people know that boxing is still running supreme over any discipline out there,” he said, prior to the bout.

But things would not go Toney’s way on that night. As soon as the fight started, Couture took Toney down, dominated him from the top, and used his ground skill to submit Toney with a tight arm triangle. Once the fight hit the mat, Toney’s defense was reduced to rolling around panicked, looking like a kid getting beat up for milk money.

The bout was eerily similar to one of the earliest and most famous events in MMA.

Rewind 17 years ago, when the Ultimate Fighting Championship debuted in America.

The world watched as the unlikely Royce Gracie, wearing a plain gi and black belt, disposed of some of the tournament’s toughest strikers, including Dutch kickboxer Gerard Gordeau and boxer Art Jimmerson.

Despite his opponent’s superior size and strength, Gracie was able to take them down at will and submit them without ever taking a punch.

Royce was not a physical specimen. Compared to the others, he looked completely average in the cage. Nevertheless, he was able to dominate the tournament and claim victory using one of the most unique ground fighting arts in the world.

[blockquote class=”quotes”]“I am a shark, the ground is my water, and most people don’t even know how to swim.”[/blockquote]

Brazilian Jiu Jitsu has always had a knack for favoring the underdog, and for making one rely on mental strength more than physical. It’s the uniqueness and dynamic nature of BJJ’s ground work that gives it the advantage, and makes it so foreign to other arts.

As the great Jean Jacques Machado once said, “I am a shark, the ground is my water, and most people don’t even know how to swim.”

And from the triangle choke that saved Anderson Silva’s title, to Werdum’s miracle submission of Fedor Emelianenko, we see Jiu Jitsu prove itself to work, time after time.

When Couture submitted Toney at UFC 118, he proved again to the world what Royce Gracie had done so many years before:

That in a matchup of style vs. style, BJJ is the answer.