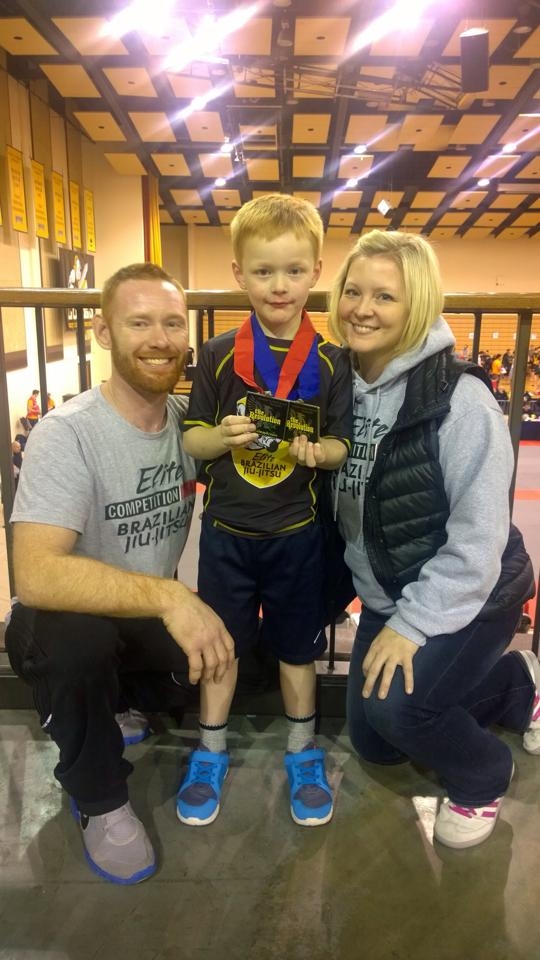 Brazilian Jiu-jitsu’s obsessive appeal springs from the lessons and rewards given toward the goal of self-development. Life on and off the mat, work, and family, and BJJ are all a part of the game that life gives to us. It is an on-going challenge of prioritizing all of our duties to create a balance. Luckily some have found a way to handle the weight grappling with so many tasks. Father, husband, and head instructor of Elite Brazilian Jiu-jitsu Andrew Solheim has a creative solution in merging the joys and responsibilities of his multiple roles providing him with a well-balanced life both personally and professionally.

BJJ Legends got the opportunity to speak with Professor Solheim. He touches on his journey and the balance of family and life as a Brazilian Jiu-jitsu instructor.

You started BJJ over 15 years ago. What got you into BJJ?
Solheim: My interest was at its peak when Royce Gracie fought in and won the very first UFC back in 93′. At the time my whole family was involved in Karate, I of course wanted to learn this new martial art however at the time there wasn’t any academies in WA. With nowhere to turn for traditional instruction my father ordered the Gracie VHS tapes and the two of us started supplementing our Karate training with what we could learn from those tapes. We didn’t have much to work with but I remember we would push the couch aside and grapple in our living room, we’d also try to find floor space after our karate class and train. As a teenager I took a break from training in the martial arts. Thankfully my father and mother continued to train because in the late 90’s a blue belt named Mike Simpson started a BJJ class two nights a week at the dojo they trained at. My father told me about the class and that officially ended my break. In 2001 I started commuting an hour south to train under Gracie Barra Black Belt Marcio “Mamazinho” Laudier Vilamor. The rest as they say in history.

Seeing how the sport evolved, what was it like coming up to where you are now as an instructor?
Solhiem: Jiu-Jitsu was in its infancy here in Washington when I started training. At the time Marcelo Alonzo and Mamazinho were the only Black Belts in the state. Tournaments usually took place out of academies and of course the field of competition was small. Today there are so many great academies in WA and the level of competition is higher than ever. A big contributor to this is the Revolution BJJ tournament. I believe they held their first event in 2006 and since then grown to be the biggest tournament in the NW.

You have been building a career in BJJ while also raising a family. How have you been able to stay the course juggling such great responsibilities?
Solheim: Balance. My wife Amy and I were high school sweet hearts and we started our family early becoming teen parents to our son Riley at the ages of 16 and 17. My son was born right around the time I started training, I think Jiu-Jitsu provided the outlet and guidance I needed at the time. My wife and I married out of high school and now have three sons Riley (15), Owen (12) and Eli (6). Jiu-Jitsu has been a lifestyle for me ever since I started, it’s not something I do, it’s who I am. I want my children to follow their dreams; I want them to do what makes them happy. Actions speak louder than words so I’ll follow my dreams in hopes that they’ll learn to follow theirs.

Somewhere along the line your wife got a touch of the BJJ bug, after seeing you do it for so many years, what promote her to want to participate?

Solheim : Amy is a very shy person and was never into sports growing up so she was an unlikely candidate to all the sudden decide to start training, but that’s pretty much what happened. One of my female students kept bugging her to try it out and one day she just decided to go for it. She was hooked and she started training regularly. Last May she competed in the world championships and did great winning her first two matches making it to the quarterfinals before being eliminated. I think it’s a testament to Jiu-Jitsu that a mother of three with no athletic experience can get on the mats and make the kind of transformation that she has.

Do any of your children participate in BJJ or other related sports?
Solheim: Since I teach it was only natural to have them in my classes from an early age. All three of my boys have or actively train BJJ.  Amy and I take a laid back approach to it though, although we require some form of physical activity we don’t push real hard. We tell them to do their best and fight with heart because that’s all they can control. If they give their heart in everything they do than I will be proud regardless of the outcome. In addition to BJJ, Riley and Owen also wrestle. Riley is just finishing up with his first season of high school wrestling and Owen is just getting started with his first middle school season.

As an instructor how do you separate being their instructor on the mat as you are the husband/father?
Solheim: When we’re on the mats I am the instructor and they are the students, it’s really not that hard, I treat them the same as any of the other students. The difficulty lies at the tournaments, as a coach you are always nervous for you students to compete; when that student is your child or wife this feeling is multiplied.

How has this pastime helped bring your family together?
Solheim: Anytime you enjoy an activity or shared interest it helps build strength within the family unit. Jiu-Jitsu just happens to be one of the things that we enjoy together however we also enjoy other interests as well.

Looking back at your journey how has it overall helped you?
Solheim: Jiu-Jitsu has been a passion of mine ever since I stepped foot on the mat. It’s important to have something that you find meaningful in life, something that occupies your mind and that you look forward to. The physical and mental benefits are obviously amazing as well, we are meant to move, to exercise and often times as we grow older we get away from that. I find Jiu-Jitsu to be a therapeutic and fun way to stay in shape both physically and mentally.

Any final thoughts before we wrap up time interview?
Solheim: Jiu-Jitsu is different for everybody. Some guys are out to win world titles, some are looking for self-defense and others are just looking to live the lifestyle and gain the benefits that come from that. Whatever your reasons are focus on you and try your best not to measure yourself to others. Jiu-Jitsu can be full of frustration at times, understand that this is normal, part of the process, and required for growth. The hardest part of training is often times coming through the door; once you commit to that the rest is easy.

Driven By Faith: The Story of DeuS Fight Co.

Hyperfly Do or Die with Kerstin Pakter