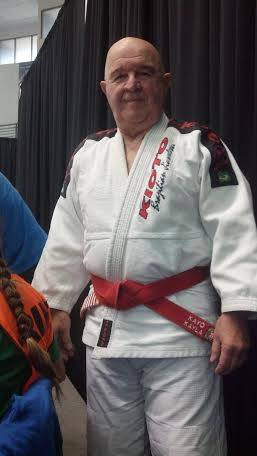 In San Bernardino CA, the Kids Worlds International Championships for kids and teens just wrapped up their 6th year. This year’s gi team trophies winners were: First place ATOS Jiu-Jitsu, second place United BJJ, third place Gracie Barra. In the no-gi category first place again went to ATOS Jiu-Jitsu, second place to United BJJ and third place to Ferny Jiu-Jitsu. Congratulations to these teams and all the competitors who made it onto the podium.

Kids Worlds is the work of a team led by Rommel Dunbar. Rommel is a four stripe black belt under Pedro Carvalho and a seven time world champion. He runs United Brazilian Jiu-Jitsu with two locations in Moreno Valley and Riverside California.

At this year’s Kids Worlds there were over 1000 competitors with 239 gi divisions and 150 no-gi divisions. The youngest division was 2009 or kids that are 4-5 years old. The lightest weight class was 39.5 pounds. The array of weight classes / age groups was dizzying.

On Saturday, 9th degree coral belt, Francisco Mansor was at the Kids Worlds. He met and talked with kids and parents. Lucky kids got to take their picture on the podium with the famous coral belt.

All told there were 250 academies at the tournament and some six countries including Australia New Zealand, Dubai , Canada, Mexico, Brazil. The Kids Worlds tournaments follow IBJJF rules and regulations.

Gracie Nationals What You Did or Did Not See