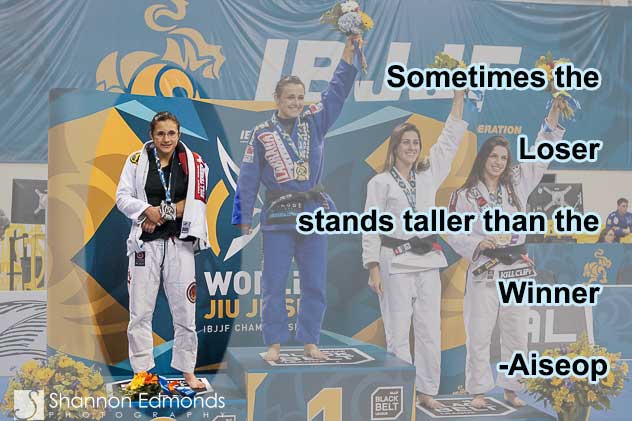 The article examines Tammi Musumeci’s gutsy performance versus Michelle Nicolini through what film and literature has taught us about grit and finding the value of our name.

The beginning of wisdom is to call things by their proper names.

If there was ever a time in sport Jiu-Jitsu when you don’t tap, that was it. Sunday at the 2014 IBJJF World Jiu-Jitsu Championship, Michelle Nicolini placed Tammi Musumeci in a brutal, behind-the-back arm-bar. Tammi did not tap, and Nicolini dislocated Tammi’s elbow. Tammi was up 6 to 4 with less than a minute left.

She avoided a spider guard sweep by Nicolini, which allowed Nicolini to slip behind and capture the arm. Tammi’s arm straightened, stiffened, and then popped. You could almost hear the hollow sound, two bones un-notching creating an uncanny bend. Tammi continued to fight, but Nicolini got to her knees and toppled Tammi over. The score was then tied 6-6, but Nicolini was up on advantages. Tammi had one final push, upa’ing into top guard. Her arm, however, was limp and bent the wrong way, like a doll whose owner reversed one of the arms. The match ended, Tammi dropped, and she released the held-in scream of pain that would have been a verbal tap during the match.

Sports wait for that moment. No, not an injured player, but of a contestant who gave it all they had, even a limb. Sports may be played for the win, but they are watched for that iconic, symbolic image. No one really believes a loss is the same as a win, despite the saying, “doesn’t matter if you win or lose, what matters is how you play the game.” However, there are times when a loss is more important than a win. Sometimes a loss transcends the win and the loser stands taller than the winner. Sometimes the one who is remembered is the one who lost. That moment is when Tammi found the meaning of her name in our sport.

The most obvious analog in Jiu-Jitsu is Jacare’s win over Roger Gracie in the 2004 absolute Worlds finals. Roger snapped Jacare’s arm. Jacare won. The problem with Jacare’s win, though, is that it rings hollow. Jacare never continued the fight, as he stalled for a few minutes and ran away the rest of the match. He should have been disqualified. Lack of combativeness is cardinal sin number one in combat sports, including Jiu-Jitsu. In Judo it’s an automatic hansoku make, which not only results in the loss of the match, but expulsion from the tournament itself, meaning even if it was the finals, the loser on such a major penalty would not receive second place.

Across other sports, history is full of moments when a contestant should have tapped, but didn’t. The kink with most of these moments is that the player wound up winning in the end. In doing so, they became revered but unidentifiable to us. They become gods and legends. Kirk Gibson should not have stepped up to the plate against the Athletics in 1988 World Series; yet he did, and he hit a homerun, and we remember his iconic, slow limp around the bases, while pumping his arms. New Yorkers have Willis Reed returning from the locker room in Game 7 of the NBA Finals. These are win-wins. They risked and won. Obviously, it was worth it.

However, a loss that transcends the opponent’s win is the stuff of great literature. That’s what gives most of us, those who are not Gibson or Reed, we who won’t win the championship or be the one, but be the other one, the second, third, or fourth place one, our symbolic force. It is with the contender that we really identify with. It’s everywhere in the narrative arts.

For example, the Rocky Statue erected at the top of the Philadelphia Museum of Arts is not a sculpture of a winner but of someone who lost. In Rocky (1976), Rocky begins his run in the early morning. The song “Gonna Fly Now” plays in the background. He jogs through an empty, still sleeping, Philadelphia. Before he reaches the steps, he starts a sprint up, reaches the top, and raises his arms in victory. That is the moment, the pose, that is immortalized in the statue. Rocky lost the subsequent fight. The film’s transcendence of the “fight story” is what made it the Best Picture winner for 1976. It is what gave Rocky the force of his name. In Rocky II (1979), Rocky runs up the steps, but is surrounded by a crowd raising their own hands. Rocky went on to win, and the films never recovered their artistic value. The Rocky Statue was erected for the filming of Rocky III (1982). The statue of a winner would have the crowd surrounding him, jumping on the bandwagon. The statue there, of one who lost, is of a sole combatant, of “an anyone” and everyone who has taken that jog alone in pursuit of a dream and not quite reached it.

I don’t know if I have that in me. We would all love to know. To risk it and walk away with the loss. To risk it and walk away with the win, everyone wants that; that’s sports fantasy number one. Yet, what everyone wants to know, wants to find out, is if we have it in us to lose. Deep down, we know that is when we know what we are made of. That is when we find out what our own proper name means. Who we are, in defeat.

That is the thingness of defeat. It is an encounter with the self. Tammi was the one. The warrior who can be wounded and lose. That is whom we truly identify with. William Wallace’s cry of freedom has rung in our ears since we watched Braveheart (1995). Remember, Wallace can say the word mercy to save his life. Instead, he screams freedom which ensures his death.

Royal Magistrate: Now behold the awful price of treason. You will fall to your knees now. Declare yourself the king’s loyal subject, and beg his mercy, and you shall have it.

Royal Magistrate: (leaning over to whisper to William) It can all end, right now. Peace. Bliss. Just say it. Cry out mercy.

Royal Magistrate: (to the crowd) The prisoner wishes to say a word.

William: (after much struggle, shouting with all his might) FREEDOM!

Arthur Miller’s The Crucible (1953 play, 1996 movie) examined the same thing. Set during the Salem Witch Trials of 1692, the protagonist, John Proctor, will not, in the end, confess falsely to having seen the devil and of being a witch. He tears up the confession when he sees his named signed on a lie. He realizes that all we have in this life, that we can carry with us and we leave behind, is our name.

Danforth: Then explain to me, Mr. Proctor, why you will not let –

Proctor, with a cry of his whole soul: Because it is my name! Because I cannot have another in my life! Because I lie and sign myself to lies! Because I am not worth the dust on the feet of them that hang! How may I live without my name? I have given you my soul; leave me my name!

Danforth: Is that document a lie? If it is a lie I will not accept it! You will give me our honest confession in my hand, or I cannot keep you from the rope.

Hale: Man, you will hang—you cannot! […] (Turns to Elizabeth) Woman, plead with him! (Drum roll. Elizabeth avoids his eyes.) It is pride, it is vanity. Be his helper! – What profit him to bleed? Shall the dust praise him? Shall the worms declare his truth? Go to him, take his shame away.

ELIZABETH: He have his goodness now. God forbid I take it from him.

The film ends with Proctor being taken to his execution on the charges of witchcraft. If he had signed a confession, he’d have lived.

In that fight, Tammi Musumeci found her name’s meaning to us. Her name became embodied to us in a gruesome bend. She continued to fight and almost, almost still won. She held the scream until it was over. Warrior. Before his execution, in his jail cell, Isabella pleads to Wallace, “You will die. It will be awful.” To which Wallace responds, “Every man dies, not every man lives.” Every competitor fights, and knows you have to tap. Once in a while, a rare competitor appears and she shows us the once-in-a-lifetime moment when not to tap.

Getting Your BJJ School Involved in Your Local Community