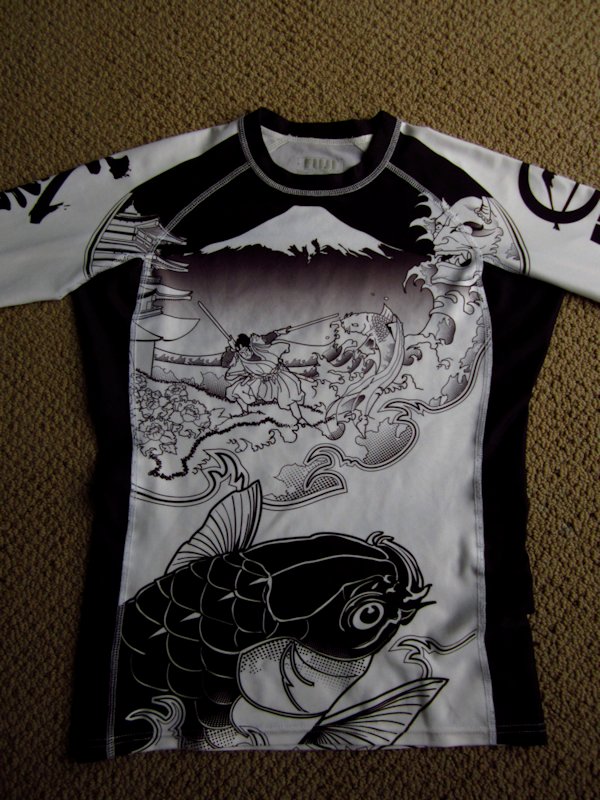 Fuji Sports has been manufacturing martial arts apparel for close to five decades. They’re best known for their judo and BJJ gis, but they also make MMA/grappling shorts and rashguards.

“In Japan, ancient samurai utilized the base of Mount Fuji as a remote training area to prepare for battle. FUJI, meaning abounding with warriors, has outfitted thousands of professional martial artists since the 60s. Our products have been put to the test during rigorous competitions and training sessions. The result is high-quality products that are built to last and have proven to withstand the ultimate punishment on the athletic battlefield.” – Fuji Sports

Fuji sent BJJ Legends their Sakana rashguard, which they describe as follows: “The Fuji Sports Sakana Rashguard is a true piece of art with traditional Japanese design elements. Koi artwork symbolizes one’s will to succeed no matter what the challenge.”

Specs/Construction/Design
The Fuji Sakana rashguard is 88% polyester, 12% spandex, and made of six panels. The graphics are sublimated (crack, fade, and peel proof) and there’s a lot of Japanese imagery going on. Front and centre is the trademark two-sword style of legendary undefeated Japanese swordsman Miyamoto Musashi. If you haven’t read Musashi’s 1643 martial arts classic The Book of Five Rings then add it to your on-deck list. Other typically Japanese images on the rashguard include koi, Mount Fuji, waves, a temple, and a horned devil. It’s busy, but not overwhelming.

On the Mat
The rashguard feels great in practice. I’m 5’9” and about 170 and the medium is on the tight side, but not restrictive. It’s made with the longer and leaner athlete in mind, which works out well because it doesn’t ride up like some of my other rashguards. The seams are all flatsewn and comfortable.

This poly/spandex material is much lighter than the nylon/elastane and nylon/lycra combos used in my other rashguards, which were made for surfing. My body runs at a higher temperature than the average human so the increased breathability is highly appreciated.

I’ve worn this rashguard about ten times (gi and no-gi) and there are some small pulls across the shoulders. No surprise, considering that I play a fare amount of closed guard. The stitching has remained intact so far, no loose or pulled threads. It will be interesting to see how well it holds up compared to my heavier rashguards.

Conclusion
Fuji has a convert. Now that I’ve experienced the lightness and breathability of the poly/spandex Fuji Sakana rashguard I’m going to have a lot of trouble pulling out my heavier nylon/elastane O’Neill rashguards, especially in the summer.  The Sakana can be found here for $64.

I tend to stick to simple designs and the Japanese imagery on this rashguard initially struck me as overly busy. I got used to it quickly though, and it’s starting to grow on me. My instructor’s assessment: “you don’t even look like Jeff anymore. You look like jiu-jitsu guy.” I didn’t ask whether that meant that I haven’t looked like a jiu-jitsu guy for the last six years that he’s known me.