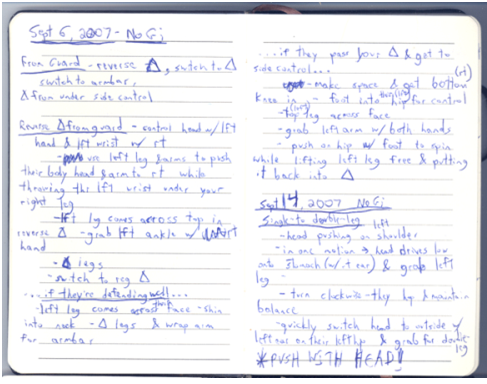 A technique notebook is one of the most powerful Brazilian jiu-jitsu training aids. I’ve been keeping one on and off since my first judo class and have found that my rate of progression is directly proportional to my diligence with updating my BJJ notebook. Jiu-jitsu isn’t something that’s easy to describe using words alone and a couple of people at my gym have asked to see my notes, so I figured I’d put together an article explaining why and how I do it.

Brazilian jiu-jitsu is a complex martial art. For every technique – takedowns, sweeps, guard passes, submissions, escapes… – there are multiple counters. And multiple recounters for every counter. Need a visual on that? Check out some BJJ flow charts. How is a person supposed to remember all of this? Keeping a jiu-jitsu notebook helps.

[Editor’s Note: This article appeared originally at Jeff’s blog www.jiujitsuvortex.com and can be found here.]

Euclidean geometry, related rates, and physics lab reports are generally hated by students, except for sick freaks and Asians. I’m at least half of one or more of those things – not to mention that my work involves dabbling in information architecture – so process-minded stuff is second nature. When it comes to Brazilian jiu-jitsu training logs, the approach is the same as keeping a lab notebook – include relevant details and omit everything else. Here’s my procedure:

Brazilian jiu-jitsu training is largely knowledge based. Remember learning the steps of an armbar from guard for the first time? Transitioning from side control to mount? Setting up a judo footsweep like deashiharai? It was a bit overwhelming, but with repetition those movements became instinctual, freeing up memory space for new techniques. But during that process, your BJJ instructor also taught you some techniques that you couldn’t remember (“I had a good handle on that kneebar to ankle lock transition until learning that omoplata series pushed it out of my memory”). Don’t let that happen again! Like a backup drive, your notebook stores the jiu-jitsu techniques you learn until you’re ready to internalize them.

Going over the techniques in your head while making notes is a valuable exercise in itself. The benefits of visualization to sports performance and injury rehabilitation are well documented. There are even journals dedicated to sports imagery research.

If you’ve been training jiu-jitsu for any length of time, you’re familiar with the frustration of plateaus. Inspiration from your notebook is the perfect way to push past a plateau and help you work your way through the Brazilian jiu-jitsu belt progression. And there’s a cool phenomenon at work here. Since taking those notes, you’ve been training and internalizing BJJ principles, so the techniques will probably make more sense than when you first wrote them down.

1. It’s your notebook. Forget grammar, create your own shorthand, use diagrams, whatever works. Cryptic notes are also useful for confounding that pesky shinobi who comes under cover of darkness to steal the secret martial arts techniques contained in your notebook.

2. Keep it brief. By the same token, don’t write down every detail. Just the bits you need to remember. There’s no reason to bore yourself. If you’re a purple belt, do you have to remind yourself to change your hip angle when finishing a triangle? To block your opponent’s hip during a north-south choke? Probably not.

3. Don’t forget about it. Remember to pull your notebook out from time to time. As mentioned, taking the notes is useful in itself, but the real value comes when you review them months or years down the road.

4. Fresh is best. Take your notes as soon after class as possible.

5. Date your entries. It’s fun to track your progress.

5. Use a logical format. If you don’t understand your notes a year down the road, you aren’t getting a lot of value. To give an example of the system that works for me, I’ve scanned a few pages from my notebooks. The first scan is two pages of no-gi BJJ techniques. The next four scans are a series of pages covering techniques from different forms of side control (forklift, kuzure kesagatame, and kesagatame) and mount. There are chokes, armlocks, shoulder locks, a neck crank, and a kneebar.

Note: The scans are a bit light on this page, but clicking on them will open the image in a new window and for some reason those images have more contrast (ie. are easier to read).

Given the designer BJJ gi phenomenon, it’s somewhat surprising that nobody is marketing moisture-resistant, acid-free, fade-proof Brazilian jiu-jitsu notebooks with glittery silkscreens of kanji, swords, snarling animals, and the like. Any bets on how long it will take the Gracie Academy to release a “Grandmaster Helio” Moleskine notebook for $20?

Pulling Off The Anaconda Joke From The Front Head Lock Position

Technique of the Week- Crucifix Choke