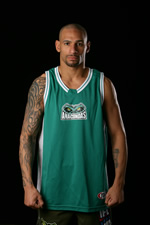 “The Thoroughbred” Jay Hieron has enjoyed considerable success in the IFL, combining his furious grappling skills with a deadly striking game. He became the IFL’s first welterweight champion after defeating Delson Heleno in the finals of the World Grand Prix in December of 2007.

Hieron, wrestling since he was 14 , competed through high school and into college. When Jay got arrested, he realized he was at a turning point in his life and began to train MMA. He began to get better and took it up as his purpose. He moved to Las Vegas and began training at Xtreme Couture, where he quickly moved onto the path to

Hieron, a naturally talented fighter, has a work ethic and conditioning that keeps him at the top of his game. Now a champion in the IFL, he is the man to beat in the 170‐pound division.

BJJ: Tell us about your ground game what styles does it consist of?

I like to damage my opponent, either with my standup or on the ground – whatever the rules allow in the ring, and make my opponent give up a bad position and then head for the submission, a choke or an arm bar. My motto is “I’ll take what a guy gives me.”

I feel really good when the guy is in a scramble because it usually ends up very good for me.

BJJ: How long have you been training your ground game?

J: I have been training in wrestling since I was 14, and started MMA in 2002; that is when I started my ground game. I’ve done a lot of submission grappling tournaments. Pan Am games – won that; Grappler’s Quest. I feel that you have to train Jiu-Jitsu and submission to get good at it.

MMA is totally different from Jiu-Jitsu. You see some of these great BJJ guys come in, and they are not doing as well as some would think. It’s very different when someone is punching you in the face than in a Jiu-Jitsu tournament.

I’ve adapted my ground game to my style from wrestling my whole life and combined it with my Jiu-Jitsu. When I’m on my back, I can go from a sweep or submission or get back to my feet, unless we’re in a scramble situation; then, I’ll go for it.

Who do you train your Jiu-Jitsu with, and do you have a belt?

J: I started with Rodrigo Gracie, then I moved to Vegas, where I trained with Mark Lehman. I have a purple belt, but I haven’t really worn a gi in a long time. Wearing a gi makes your Jiu-Jitsu better; I’m training to get my MMA sharp so I never wear a gi.

BJJ: Where do you train, and who do you train with to sharpen your ground game: BJJ, Grappling, Judo?

Xtreme Couture with Randy Couture, Mat Lindlin, Dan Henderson, and Mark Lehman. They have the ground and pound down to a science. I used to think they were just on top of someone punching them. Their posture and the skill needed are incredible.

I feel blessed; I’ve got a whole bunch of people around me, and if someone shows me something, I’ve got an open mind, and I’ll try it.

How do you condition?

J: I do a lot of circuit training; I’m 8 weeks out and lifting heavy. Next week I’ll get started on cardio. It’s an evolving process; I’m still learning by trial and error. It’s been working for me on my last couple fights, and I’m excited.

I’m starting to learn my body, and know when I over train. Knowing your body, what you can take and not take. I’m always training, and I pick up my training 8 weeks out from a fight. I can even get into fight shape in 4 weeks if I need to.

I don’t feel ready unless I do a lot of sparring; it makes me feel sharp. I start with small rounds and build on them, every week another minute or another round.

BJJ: Do you follow a special diet? Do you use any Supplements?

J: I drink a protein shake with oatmeal in the morning; I don’t have much of an appetite in the morning. When I began, I used to not eat anything and that wasn’t good.

I eat a lot of chicken and rice. These are good foods to give me energy. I’m on the Couture supplements; they have a green pill made from vegetables. It works well for me because I really don’t eat a lot of vegetables.

BJJ: In your championship fight vs Heleno, you TKO’d a guy who submits half of his opponents and has never been TKO’d – tell us about your strategy standing and on the ground.

J: My strategy was to stay on my feet and use my striking; many people don’t know that my striking is as good as anyone’s in the world. I don’t really show it because I evolve with the fight; I see what is working, and I go with it.

I wanted to keep it standing and stay out of his comfort zone. I felt like my striking was a level above his, and my strategy paid off.

BJJ: Tell us about your background getting into MMA.

J: I’m from New York and I’ve been a competitor my whole life, through college. I started getting into trouble and got arrested, and facing jail time, I was at a point in my life to pick a direction for my life. I did not want to do what I was doing, and I wanted to focus on MMA.

Luckily for me, I started training to relieve stress. I really did not think about seriously competing but I felt the hunger come back and the competitive feeling. I loved it. MMA was new for me, and I started getting better and got more into it, and it started taking over me. My court case went well and this changed my whole life.

I moved across the country to continue training. I’m happy and I feel like I have a great direction. I really did not like to talk about past, my problems and getting arrested, but if my story can help people change their life, then it’s worth it for me.

BJJ: Name one fighter you truly respect and why.

J: Randy Couture, I respect the guy 100%. I get to train and hang out with the guy. I cornered for him when he fought Tim Sylvia coming out of retirement, and the pressure was intense, but he handled it like a pro. He has the best head in the game, and I’m totally a better fighter because of him. He’s a role model for a lot of people.

You are one of the faces, Ambassadors of MMA. What does that feel like, and what responsibility do you think that bestows on you as a person and competitor?

J: I want to be a guy that people look up to, a guy who came up from the bottom and changed his life. I have ups and downs; I’m still pushing along. Those are the guys that inspire me: the ones that comeback from the bottom when people say they are washed up. Hopefully I can inspire people with what I do.

BJJ: What advice do you have for people just getting into the sport, waking up sore everyday…?

J: First off, if you are in this game, you got to know it’s for you. You need to love it. There’s not much money in the beginning. You can’t do it for the money or fame, you have to do it because you love to compete and fight.

It’s great to get paid for what you love to do, when it’s all said and done. I love the boxing, Jiu-Jitsu, the wrestling, I love it. You need to stay at it, keep pushing along. Don’t let anyone tell you what you can and can’t do. Then get good people around to help you make good decisions, the best decisions you can.

Train hard and get good people around you; hard work pays off and your day will come.

BJJ: What is next for you this year?

J: April 4th, I’ll be back in Jersey at the Meadowlands fight with Mark Miller. I can’t wait.

BJJ: Other MMA fighters get into other areas of entertainment, movies, TV, etc. Is that on the horizon for you?

Jay Hieron, grappling and his standup have made him a champ

J: Yeah, I went down to read for a couple of movies and got back out of there real quick. It’s a game, like anything else. If I want to do that and do it well, I’ll need to take classes. But today I’m focused on MMA and fighting.

BJJ: If you could fight anyone, now, past, future – who would it be?

J: I want to avenge all my losses, whoever has beaten me. I’m sure I could beat them, no excuses, but I want to fight all the great fighters, all the best guys. I love what I do.

*All Photographs Courtesy of the International Fight League