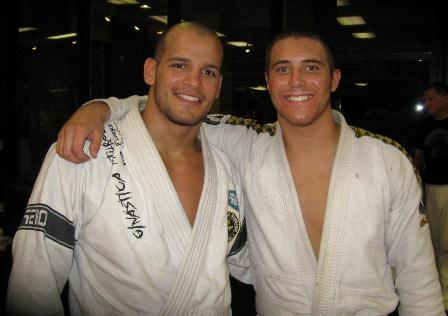 Exploring the competitive climate of Brazilian jiu-jitsu you will uncover that there are many athletes who are consumed with the ambition of becoming the best in the world. While most have found success from victories and medals obtained in competition some individuals have reached similar feats through their work outside the gym. Team Quest BJJ blue belt Jeff Larsen may appear to be your typical Jiu-Jitsu practitioner partaking in the sport. However outside of the Gi is a person that is documented for his noble deeds to helping those in need in his community and around the world.

Trials and tribulations always have a way of shaping a person’s direction in life for better or worse. Raised in a broken home alongside his sister with his parents separated Larsen had to deal with the heavy load of having instability in the home. Growing up was not a task for Larsen.  Nevertheless through the darkness would shine a glimmer of light which found Jeff channeling his pain through his participation in sports. Whether it was basketball, wrestling, or a successful run as a high school football player his involvement unquestionably instilled a positive effect in his life which miraculously also brought his family together in support of his work.

[social][/social][bjjad][/bjjad]“Sports were an outlet for handling my parent’s divorce. When you’re in that moment of competition there’s nothing else that’s going on which helps  you can have a break from your problems outside of that place. Although my parents worked a lot, they would always come to my games. Their support is what shaped me.”

Transitioning into adulthood the road would present Jeff with more tough obstacles. Seeking a change in his life he would later move to Redding, California to pursue a career in firefighting. Gradually getting by without a stable financial condition during his job tenure as a fire fighter it would find Larsen spending many sleepless nights in his car pondering where is his life headed.

However as time progressed he would once again find a moment of clarity through a strong interest in Brazilian Jiu-Jitsu at Team Quest Redding. In this period Jeff found himself residing inside the gym living the lifestyle and also getting the opportunity to train with some of the best fighters in the world. As a result of this engagement for the new Jiu-Jitsu enthusiast the experience would implant more life lessons and conjure an extreme appreciation for the art.

“The owner of the gym which was Axis Academy (Now Team Quest Redding) put out the offer to live above the gym. I would train morning and evenings which allowed me to develop a huge appreciation for the art and discipline of Brazilian Jiu Jitsu. I’ve been blessed to have the opportunity to train some legends that came through our gym like Saulo and Xande Ribeiro, Dan Henderson and Matt Lindland.  Overall Jiu-Jitsu has taught me to always be positive and to not get down in life.”

Through all of the growing pains Larsen’s true life calling would gradually unfold through a series of events showcasing his sincerity and compassion geared toward helping others. The life altering journey would take him to many places across the world positively enriching many people’s lives through the course…

Middle School Kids Mentor– Yearning to find a meaningful purpose in life with a heart filled with giving back Larsen began his charitable campaign donating his time toward mentoring teenagers at his local church. With each kid possessing a different personality and carrying their own hardships through his interaction with each individual the encounter ignited a spark in Larsen to act as a positive role model in the teen’s lives which not only helped with him in his development as an influential leader but as in his maturity as a man.

Hurricane Katrina– As many viewers watched on television screen as a devastating hurricane ravaged this city of New Orleans, Louisiana struck with a heavy heart to comfort those affected by the storm Larsen along with four other friends took a road trip to the destroyed city. The act of kindness saw Larsen uplifting people during those troubling times conducting great actions for the community by cleaning debris out of homes, interacting with the citizens, and giving gifts to children.

Sri Lanka/Tsunami Relief– Jeff Larsen’s caring for people seems to have no bounds even. Taking his giving ways overseas Larsen has also been a part of the crusade helping out victims of the tsunami relief in Sri Lanka spending time with people there once again becoming a positive uplift in their lives.

“When I was in Sri Lanka it was the coolest experience to step on the ground at an orphanage and have kids running up with joy and smiles on their faces, excited for you to be there. It’s a pretty amazing experience and I think just the joy of being able to bring joy to them and to see their smiles from you just being there to hang out with them, that brings appreciation and has helped me value life.”

Mentor at Krista Foster Homes– Even with his move to Redding it seems as though good habits never go old for the good Samaritan Jeff Larsen. Gradually building a better living condition for himself Jeff would continue his crusade as a mentor for Krista Foster Homes. Joining the organization it gave him the opportunity to become a part of more troubled youth’s lives once more instilling strong values in each person while stirring them in the right toward a more positive outlook on life.

“For Foster Boys my goal is to instill a belief that they can accomplish anything they set their minds to,” Larsen said. “So often they allow their past situations to try and dictate their future. I try to feed them words of encouragement like I believe in you, I’m proud of you; we forget how powerful words can be. The biggest things growing up from my dad or a mentor figure were I’m proud of you, but also throwing in why I’m proud of them to place an action to the words and make them want to work harder.”

Helping many through his voyage the adventure has provided a major impact for Jeff Larsen. Opening up his consciousness about other people’s situations and predicaments it has taught the Washington native about having appreciation for the things he has in his life and not take it for granted. These lessons not only helps fuels his drive in his development but steers toward becoming a help to more people in the world.

“These experiences have taught me just to not take things for granted and to have a deeper appreciation for the life I’ve been blessed with. It brings things into perspective that there are people out there that have it rougher than me and they are going through more than I am.”

It was once said that in order to be a great leader one must first learn to be a great servant. Pledging his entire life in aiding his fellow man Jeff Larsen defines the means of what it truly means to be selfless. Carrying on his own development in his personal life and as a grappler Larsen hopes to continue his bountiful ways of being a blessing to those in their time of need.

“I’ve had my ups and downs, struggles and things I’ve been through. But I’ve also been blessed in a lot of ways and believe that, when you’re blessed, you should do what you can to be a blessing to others. Because of struggles I’ve had, I want to be able to help those going through similar situations.”