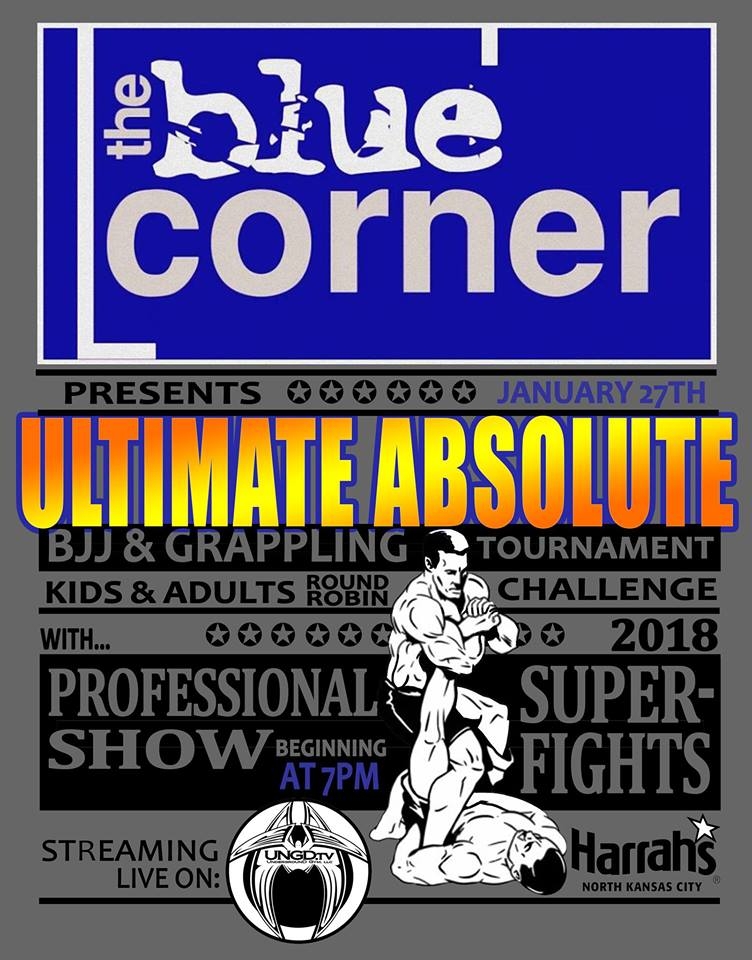 Professional grappling shows have taken the sport of Brazilian Jiu-jitsu and Submission Grappling to a new plateau, opening profitable doors to its athletes and aspiring event promoters. The grappling fight series trend has seemingly made its way to Kansas City, Missouri with the inauguration of the city’s first professional grappling event “Ultimate Absolute 2018.”

The Ultimate Absolute is a grappling fighting series created by the brilliant minds of Blue Corner Production and UNGD.tv. Ultimate Absolute 2018 program consisted of a three-part event featuring round-robin kids and adult tournament, and an action-packed pro show of eighteen super fights, with the winner receiving a cash prize.

The event’s buzz-worthy promotion drew massive numbers; competitors from 35 grappling teams from 11 states took part in the event. From start to finish the “2018 Ultimate Absolute” was a star-studded compilation featuring some of the best grappling talents from across the country.

The show kicked off with two spectacular teen matches that featured Billie Merreighn of Bloomington JJ battling NLD’s Paulie Hernandez, and Brazil Academy’s Trevor Cameron going against Frankie Hoggard of Easton Castle Rock JJ. The skill, hunger, and drive to emerge victorious was put on display by each young athlete, as the platform may have revealed some future stars in our sport.

Another highlight of the night was a purple belt no-gi match between Jordan Peitzman and Justin Fabric, whose back-and-forth leg lock battle had spectators on the edge of their seats wondering who would come out on top.
In addition to the many grappling talents gracing the stage, the event also caught the attention of famous faces in the MMA world looking to put their grappling skills to the test.  In what many are calling the controversial contest of the night saw a barnburner match between UFC veteran Josh Neer taking on grappling ace Devin Chasten. Josh Neer doesn’t back down, neither does his opponent Devin Chasten.  The match fell quickly into a stalemate, with Neer inside Chasten’s guard unable to generate any pass attempts and Chasten unable to create any real offense or sweeps. Words started to get exchanged between both men, as all can see it heating up. As the match progresses, Chasten seemed to have had enough, as he unlocks his guard and stands to his feet, which was followed by Neer running him clean off the mat hard into the crowd.  The place went nuts with boos, and it becomes very hostile.  This happened with only 3 seconds left in the match.  They started the clock; the 3 seconds ran out as Chasten motions to the crowd with his arms.  The center referee brings them to the middle of the stage, awaiting the decision of the three mat side judges.  They all 3 raise the hand in favor of Neer, and once again both combatants have an exchange of words.  Unhappy with the decision, Chasten pulls away and goes nuts with the verdict.

Even with the contended battle between Neer and Chasten leaving everyone depleted, The Ultimate Absolute was far from over. The attention now shifted to the co-main event pitting Easton Castle Rock’s Alex Huddleston against Axios JJ’s John Hansen. A highly contested match both fighters left everything on the mat, as Hasen and Huddleston proved to be equally matched challengers. However, when the smoke cleared it would be Huddleston that would walk away with a split decision victory over the gamed John Hansen.

The night of action then went into the grand finale main event featuring Renato Tavares vs. Luis Flipo Ninja Pinto. The match would start off at a slow pace with each competitor being very cautious waiting for the other to make a mistake. However, as the fight progressed Tavares’ half guard and bulldog top pressure proved to be the deciding factor in scoring a unanimous decision victory over the Brazil Academy instructor.

Surprising upsets, thrilling submission finishes and hyped controversy, The 2018 Ultimate Absolute was a major success drafting more than 500 in-door spectators and 78 online streaming viewers, as it was dubbed by many as “The Best Pro Grappling Show They Ever Seen.”  Show’s fans already want more!  Event promoters are currently making plans to push the “Ultimate Absolute” brand, as it aims to offer competitors and fans the unique and fun experience.

“This event was a HUGE success in terms of competitors and fans,” said event Promoter Travis Conley.  “‘When is the next one?’ That’s all I heard after the event.  I want the Ultimate Absolute to continue to be something special and elite, an annual event you train and prepare for on the calendar.  We want to improve it and make it better, of course.  We want to increase the business and participation of local tournaments in KC so we’ll be offering spots in the Ultimate Absolute to winners of those local tournaments throughout 2018. This will give competitors the incentive to compete locally, gain your position in the Ultimate Absolute 2019.”