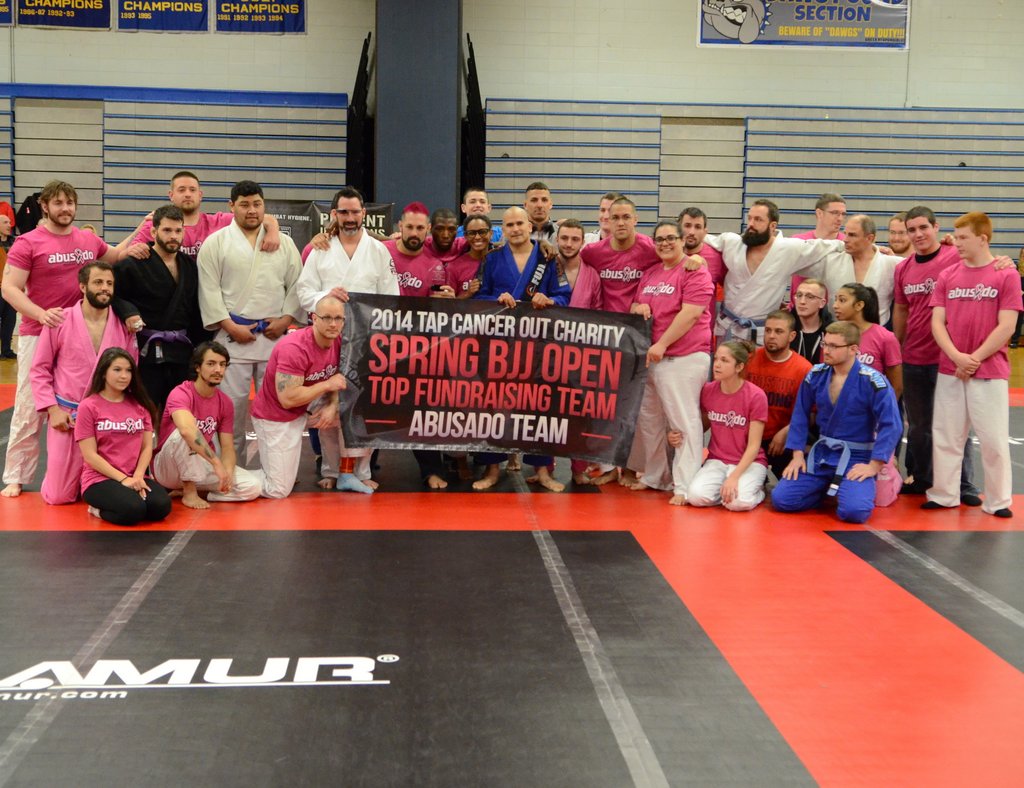 The organizers at Tap Cancer Out are holding their first West Coast fundraising tournament on Jan 17. We got a chance to ask them the important questions.

Who should go?
Cancer doesn’t discriminate, so why should we? In all seriousness, our tournaments are great for everyone. It’s a low-pressure and well organized environment, perfect for someone testing the waters of their first tournament. We allow the higher belts to go first, since I think they’ve earned it. Plus, black and brown belts compete for FREE. We offer a masters division for white and blue belts, and we have a dedicated ring for all women’s divisions. The morning features Gi and the afternoon is No-Gi. It really is designed to give a high quality tournament experience no matter where you are in your BJJ journey. We’re a community and we welcome all. Plus, it’s very affordable—$50 for one division and $70 for two and free for competitors that fundraise over $250—so it’s a low risk, high reward proposition. We unfortunately don’t have children’s divisions yet but are looking to change that this spring.

What is Tap Cancer Out?
Tap Cancer Out is a 501c3 nonprofit organization dedicated to raising awareness and funds for cancer-fighting organizations. We do this mostly through our innovative fundraising tournaments, like our upcoming Winter BJJ Open in San Diego, where competitors can fundraise to compete for free as well as earn great prizes. Since 2012 we’ve raised nearly $200,000 for various beneficiary organizations, including donating $100,000 to the St. Baldrick’s Foundation in 2014. They’ll again be our beneficiary organization in 2015.

We hosted our first tournament in 2012, not knowing what charity tournament would look like or how it would go over. But it was a huge success and people loved the opportunity to fight for more than just themselves. Our tournaments gave them the opportunity to share their stories and fight for those who are in the fight of their lives. We’ve hosted five tournaments in all (which is a big undertaking for a small nonprofit) and hope to host four more in 2015. We’re located in the northeast, so all our tournaments have been in Connecticut and Massachusetts, but on January 17th we’ll have the opportunity to bring our cause to San Diego and we couldn’t be more excited. We’ve already exceeded $10,000 raised and will most likely raise $5,000 – $10,000 more in our final few weeks of fundraising, helping us reach our goal of $20,000!

When is the Winter Open?
Our Winter BJJ Open takes place on Saturday, January 17th at the University of San Diego Recreational Sports Center. Doors and weigh-ins open at 8am and we’ll start the GI divisions at 10am, the No-Gi divisions at approximately 1:30pm, and will wrap the day up around 5pm. We’ve finished every single one of our tournaments on time and this one will be no different. We pride ourselves in how efficiently our tournaments are run.

Where is the venue?
The event specifically takes place at the University of San Diego Sports Center 102 at 5998 Alcala Park San Diego, CA 92110. There is free parking nearby.
http://www.sandiego.edu/maps/#42

Why? Why have you made Tap Cancer Out? Why have tournaments? Why come to the west coast?
It was back in 2010 that I came up with the idea for Tap Cancer Out. I had been training BJJ for two years at that time and realized that while the sport and community was filled with great people and growing every day, there wasn’t a philanthropic presence. I also noticed that I personally wasn’t doing anything to make the world a better place. I didn’t really know what Tap Cancer Out would be, but I knew I wanted to start it and just figured I’d learn along the way. We met some obstacles and had some false starts, but ultimately we realized that fundraising tournaments was a way to empower the BJJ community to create change. It was the perfect way to marry their hatred for cancer with their love for BJJ, and also a way to show the world what BJJ was truly about, since it’s such a misunderstood sport.

We don’t have a single full-time employee at Tap Cancer Out. We have a very small team and we all have full-time jobs that pay the bills, working on TCO in our spare time. That means it’s difficult for us as an organization to expand. We have 2,400 square feet of beautiful Dollamur tournament mats, but we can only conceivably use them with a 3-5 hour driving radius. We certainly don’t have a team of people that could drive our mats and other equipment around the country. So we’ve been working diligently to find partners who could help us bring a tournament to the West Coast, where we had so many fans that were eager to take part. Luckily we hooked up with GrapplingX who are supplying the mats and found a venue at the University of San Diego. It’s honestly been a dream of mine to bring a Tap Cancer Out tournament to the west coast and I can’t believe it’s finally going to happen. I can’t wait, and I hope to see the entire west coast BJJ community there.

Also, we created a mini-documentary at our 2014 Spring BJJ Open that truly captures the essence of our tournaments— https://www.youtube.com/watch?v=eECr2-ZL0po

Here’s to a big turn out and great fights.