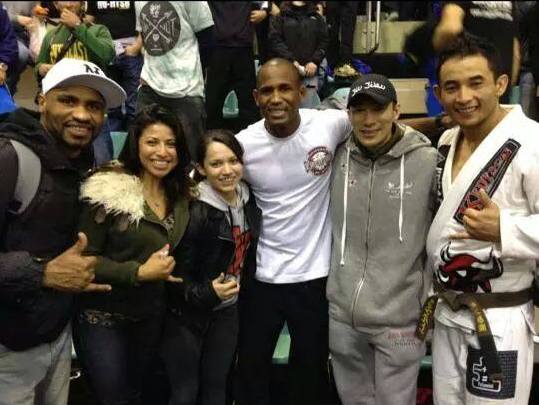 Jennifer Perez returned home last week after a year traveling the world and training Brazilian Jiu-Jitsu. She visited 10 countries and 45 academies. Fresh off her travels Kostas Fantaousakis asks her about her year abroad.

Kostas: Jenifer, how long have you been training in BJJ.

Jennifer: I have been training since February 2012. I started Training BJJ as a way to rebuild my self-esteem and strength that had been drained from a bad relationship of 9 years.

Kostas: What is your belt rank and who is your instructor(s) in BJJ? Do you train in other sports too or just BJJ?

Jennifer: I was promoted to blue belt in June of 2013 under Amal Easton. I trained kickboxing and Muay Thai 2 years prior to starting BJJ. I had a 1 year break between the time I stopped MT and started BJJ

Kostas: How did you get this idea to travel around the world and visit so many academies?

Jennifer: Japan was always a place I wanted to visit so after my breakup I took some savings and booked my trip to Japan. Fast-forward, on my flight back I couldn’t help but be sad knowing that the high from my trip would soon subside. There was a Fidelity commercial that came on and at the end of it it said “Save Today to Live Tomorrow”…that was the moment I realized I had to quit what was making me unhappy and dedicate at least one year to myself. To try and discover my intended purpose. I read BJJ globetrotter by Christian Graugart and immediately knew I had to do that.

Kostas: Can you name some of the countries you visited? How long did it take to visit 45 academies?

Kostas: Did you travel all by yourself or did you have other athletes with you?

Jennifer: For the most part I was alone but our Jiu-Jitsu community is so amazing that once I connected with at least one person from the academy I was treated like family instantly!

I met up with many friends along the way that stayed and globetrotted with me for weeks at a time. Like Vivian Velez from Puerto Rico and Talita Alencar from Rio. It was great to have full time partners who also enjoyed visiting other academies as much as I did.

Kostas:  How do you decide which school to visit? Do you use the internet to get information first and then contact the school or do you ask friends and fellow athletes where to go?

Jennifer: I primarily relied on referrals from my professor teammates and other members of the globetrotting community that made suggestions on where to train. I did google a few places out on a remote island in Lombok but that’s because I was itching to train & no one there seemed to know what Jiu-Jitsu was.

Kostas:  There seems to be a recent trend in BJJ to combine traveling and training. After visiting so many countries could you give travelers a few tips on what to look for and what to avoid when visiting schools abroad?

Jennifer: I can’t say I’ve had a bad experience because I truly haven’t. Everyone was always so welcoming. What I do recommend is if you are traveling on a budget make sure to call ahead and confirm the cost of the drop in fee. Also, as a female I was nervous at first meeting so many new people and telling people my story and the fact that I was traveling alone, it was scary but the complete opposite happened. It’s like I had big brothers in every country I visited!

Kostas: Every BJJ school is different. Some focus more on self-defense, others in MMA and others on sport Jiu-Jitsu. Did you notice any other differences? How do schools vary from one country to the other?

Jennifer: Yes there were many different styles of BJJ. I remember showing up to No-gi class with Prof. Nico Han at Synergy MMA there were about 10 guys on the mat and I was one of 3 women. I was excited to train, except for the fact that I was getting punched in the ribs when I locked down the guard and in transition to a triangle I was getting tapped in the head by punches from by partner. It was very annoying and I kept losing focus but I believe that was the point and lesson of Prof. Nico — self-defense first.

Some schools that I enjoyed very much this year were Atos BJJ in San Diego & Mendes Bros in Costa Mesa. Both were very competitive academies with amazing training and tough competitors. Alvarez BJJ in Dallas TX has incorporated wrestling into their training and after being there for a week. I can definitely say there is no question why they have such high level performing athletes. I trained with Lucas Leite and Pati Fontes at Checkmat La Habra and their machine drills are amazing. I still use a lot of them today. I also spent two weeks training Ft. Lee Combatives with Prof Matt Smith, whoa, what a monster of an instructor. Trained with military men every morning at 5:30 am, def no berimbolos were being used here! Prof. Edison Takohara at OverLimit teaches Judo every night as a part of the BJJ curriculum, it was very fun and I learned some pretty cool throws. Every academy was different. I started at Easton BJJ where we had a curriculum and learned step by step, move by move, fundamental, intermediate and advanced. Some academies didn’t offer this. There is one class and that is it, sink or swim. You have to pay attention and learn quickly.

BJJ is a very artistic martial art and each country is painting with the same colors except every painting in the end looks very different from the other.

Kostas: Did you meet any famous instructors/athletes during your travels?

Jennifer: Yes, many amazing talented athletes. From Fernando Terere in Lisboa, to Prof. Rickson Gracie in Torrence, Lucas Leite in la Habra, Miyao Bros In Japan, Mendes Bros in Costa, Nico Han in Bali, Master Cyborg in Miami, Michelle Nicolini, MacKenzie Dern and the list goes on and on… Truly a blessed year.

Kostas: Do you have a favorite quote or piece of advice that was given to you during so many training sessions around the world?

Jennifer:  I was in Miami prepping for the worlds and Master Cyborg was running a class and after 3 hours of intense training he said, “I don’t care if you win, there will always be more opportunities. The only thing I care about is that you never quit.”

Another great moment was in Lisboa, after training, Prof. Terere overhears me talk about my roll with my partner and says to me the best way to win is to believe you’ve already won!!

Ian Lieberman of Easton BJJ said to me after a really tough roll, Jen you are 5’ft 127 lbs. blue belt he’s 6’4 200lb black belt. You did great! Hahaha, I know BJJ isn’t about the size of the person, it is about the size of patience you have with yourself.

Kostas: Did anything surprise you when visiting other countries?

Jennifer:  Yes, I was surprised and impressed with the determination of my Brazilian brothers and sisters in Japan that worked 12 sometimes 14 hour shifts. Afterwards go straight to the academy to train at 9:30pm train until midnight, go home only to sleep 4 hours max and be up and doing it again the next day. Now any excuse I hear people make to not train seems petty and inconsiderate!

Kostas:  To finish this interview would you say that the BJJ lifestyle is unique in bringing people of different ethnicity and backgrounds together?

Jennifer: Brazilian Jiu-Jitsu isn’t just a martial art or a sport it is much more special than that. It unites and brings people from all walks of life to one center point. The mat is full of not just one type but many and that is why it is so beautiful. There is no discrimination, no racism, no politics, no religion… It’s all about the flow of the roll! That’s why I love this so much.

Interview by Kostas Fantaousakis for BJJ Legends.
Kostas Fantaousakis is BJJ brown belt under professor Wander Braga and an MMA coach. He is the author of an ongoing series of articles that will be published in various outlets and will be archived online at http://www.embracingthegrind.com. Please share on social media to spread the love. https://www.facebook.com/embracingthegrind. Follow me on twitter to get the latest updates: @kostasfant. E-mail:fantgs@hotmail.com

Growth of BJJ in Eastern Europe: An Interview with Gile Huni