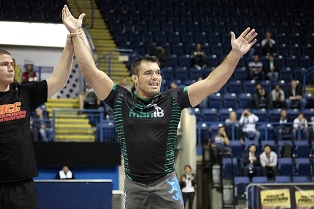 Live from the Capital FM Arena in Nottingham, England the 2011 ADCC Submission Fighting World Championships brought its legions of fans some of the most spectacular action from the best grapplers in the world, that will be remembered in years to come.

Amongst this group of competitors was the 2003 ADCC Absolute Champion Dean Lister. After a brief departure from the grappling scene the 35 year old grappling legend made his return to action to the event shocking the world becoming the 2011 ADCC -99kg World Champion defeating some of the top grappling talent of today.

[social][/social]With his ADCC goal accomplished and aspirations of future success, Dean Lister discusses his thoughts on his victory and what to expect from him in the future.

Before we get into your victory, compared to your other visits to ADCC, how was your overall experience this time around?

Dean: Even though I won the absolute in the past…… I must say this year was my best victory…. in 2003 I was young and now no one gave me a chance.

How was your training for this event and who were some of the people who helped you?

Dean: I had my friends from Victory MMA to help me… Jocko, Brian, Greg, James, Morango and more. The courage of my friends gives me honor.

Going into ADCC critics gave you a 0 % chance of winning against much younger more active competitors. What were your thoughts on that?

Dean: I didn’t care what critics said about me having zero chance… people want to be your friend only when you win, and no one cares about you when you lose…. so I don’t care anymore… I am older and I understand the fight world now.

You had some incredible matches at the event, who would you say was your toughest opponent?

Dean: They all were tough opponents, each was dangerous in their own way. My fist opponent Augusto Ferrari was very sad when I beat him but [he] told me that I made him happy by me finishing the next 3 opponents… Joao Assis and Rodolfo Vieira were both very strong!!!!

With your dream of winning ADCC now a reality, how does it feel to be the Champion again?
Dean : It feels better than I can describe to be world champion again!!!

Now that you accomplished your dream, what is next for Dean Lister?
Dean: I will return to MMA for 5 more years and I want to get back in UFC. I am a better fighter now and want another chance.

Finally being that this is an inspiring story, do you have any advice for those people out there when it comes to following their dreams?
Dean: My advice is to never give up. The saddest thing in the world is when your dreams die. Never let your dreams die, because you will die next……. always fight for your dreams!!!

Well that wraps things up any shout outs or people you want to thank?
Dean: I want to thank all my friends at Victory MMA in San Diego, and my friend Hans at Triumph United, all my friends… Timbo from Sycuan, Greg from El Cajon haha and a special piece of gym equipment called “the Jocko” (very ugly but effective) Brian Sargent (professionally chef at victory MMA) Conan Dunn my boy… Joe Mannino, the most dangerous man in California… Echo “ugliest man from Hawaii” haha all my friends love you all and coming back soon… we have a pint and talk about the good times… from old man who could never win but did… Dean Lister

Faith On and Off the Mat

Interview with Jess Fraser of Australian Girls in Gi