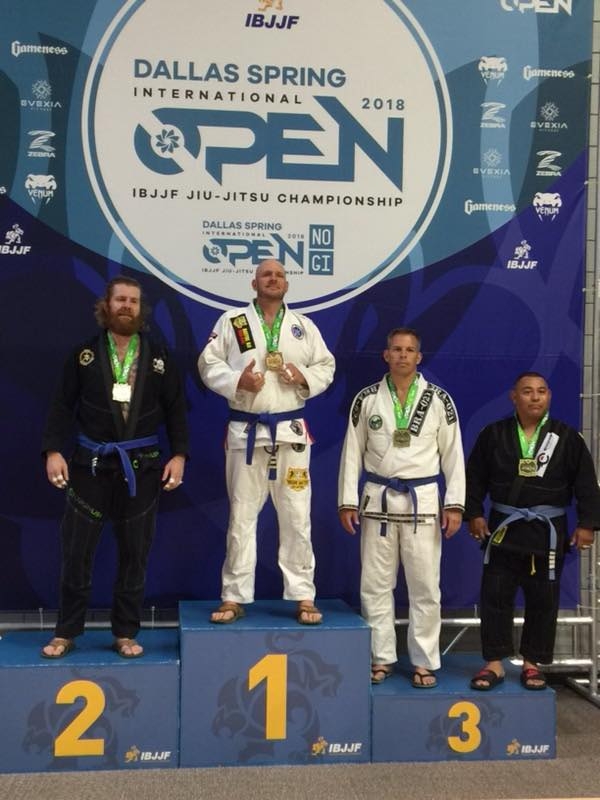 Brazilian Jiu-jitsu continually serves as a unique outlet in transforming lives. The BJJ Effect is exhibited through many compelling stories ranging from an individual reaching their athletic goals to one’s aim of conquering the battle against themselves. In 2018 at the IBJJF Dallas Spring Open, 44-year-old, blue belt Dustin Shelhamer captured double gold – with a torn bicep. The audaciousness of facing insuperable challenges is nothing new to Shelhamer. In fact, it has been an ongoing occurrence, as Shelhamer has had to overcome many battles to experience the life-altering benefits BJJ has to offer.

Before Brazilian Jiu-jitsu, Dustin Shelhamer was a full-time firefighter paramedic, police officer, and Federal disaster team member. 25 years in the practice field, Shelhamer was one of the onsite responders to some of the horrific events in U.S history. His philanthropy work for his community grievously came with a price. The experience of these events triggered Shelhamer in developing Post-Traumatic Stress Disorder (PTSD). The disorder became a deleterious plague in the serviceman’s life.

“I spent 25 years in public service as a Fire Fighter paramedic, Police officer, as well a member of the Federal Disaster Team, “Shelhamer said. “I have traveled the world and seen horrific things. I was at Oklahoma City Bombing, World Trade Center, and other horrific events. Those experiences are where I developed PTSD and even didn’t realize it. I destroyed my marriage and was pissing my life away.”

The downward spiral wouldn’t last forever, as a saving grace would bring positive reinforcement in uplifting Shelhamer. Founded by Chad Robichaux, The Mighty Oaks Warrior Program is an organization that assists individuals that struggle with Post-Traumatic Stress, as the focus centers on rebuilding the broken lives of its participants. Like many Mighty Oaks alumnus, Shelhamer involvement allowed him to reap the program’s benefits, growing mentally and spiritually. Shelhamer’s time at Might Oaks is also where he was introduced to Brazilian Jiu-jitsu. Shelhamer instantly fell in love with the grappling Martial Art practice.

“A good friend reached out to Chad Robichaux, and he got me into the Might Oaks Warriors program. I was hesitant to go at first because the program was originally designed for military personnel, and I had never served. However, Chad convinced me to go, and I was the first civilian to go through the program. They taught me two important lessons that changed my life; be the man God created me to be and to find a healthy outlet.”

God and Jiu-jitsu are the two of the greatest gifts that have given the retired servicemen a new life to live for. Inspired to continue his studies of the grappling arts, after Mighty Oaks Shelhamer’s journey would take him to Midland BJJ in Midland Texas, where he has been training and mentored under the leadership of BJJ World Champion, Bruno Bastos. The 2.5 years at Midland BJJ finds the enthusiast training four to eight times a week, engulfed in the BJJ lifestyle. Shelhamer is grateful for his professor and teammates aiding him in his BJJ journey.

“I love this sport and the friendships it brings. My Professor is a great motivator although he is considerably younger than me he has my greatest respect,” Shelhamer told BJJ Legends. “He is still a very active competitor and leads from the front. We also have some great black belts in our gym that drive us and lift us up. Brad Barnes is my solid when I’m trying to figure it all out! He’s no BS and tells it straight. Joe Castillo “Joe-Jitsu” might be the most respected man in our gym. 60 years old multiple belt level world champion and genuine gentleman. Gabe Hernandez everyone’s friend and savage, and Matt “little one” McCormick is a monster and smiles while he crushes you.”

All of Shelhamer’s training would eventually prompt a desire to test his skills in a tournament setting. The desire of challenging himself drives Shelhamer’s motivation to compete. No injury, opponent, or mental demon has yet to break the Midland BJJ representative thus far, as he has accomplished much success as a Brazilian Jiu-jitsu competitor. Dustin Shelhamer’s competitor aspirations are to win the Master Worlds and become a positive role model for his teammates.

“My biggest competition is me. I can’t quit, no easy way out. I’m fortunate in my walk with PTSD that I have never considered suicide. But I did give up on life. So now that I’m walking a different path, I made a promise to never quit to myself, to God and my corner man. Even in a loss, I succeeded in beating myself when giving up was easier.”

What would life be without BJJ for Dustin Shelhamer? There would be no healing, no fulfillment, no blessings, and no rehabilitation. Brazilian Jiu-jitsu has given Shelhamer all of these rewards, as life couldn’t be any more gratifying on and off the mat.