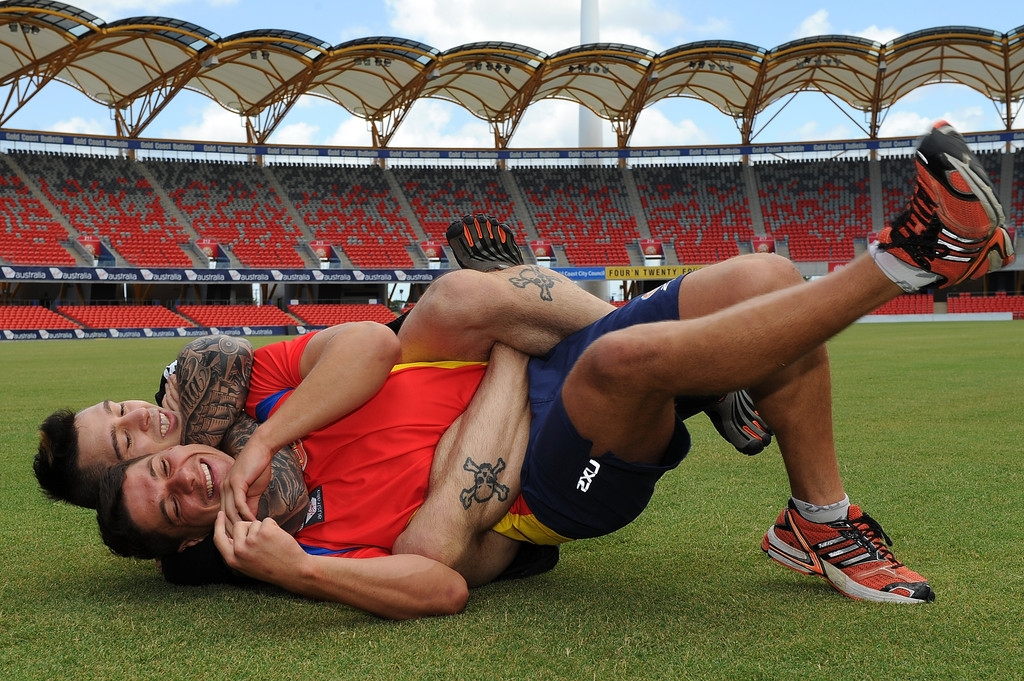 Today I am excited to catch up with Scott Steer of the Gold Coast Suns Australian Rules Football Club. [Basically Rugby for those non-Australians who are reading.] The Suns are a professional team in the AFL and as their name suggests they hail from the Gold Coast, Queensland, Australia. What makes today`s chat unique is the fact that Scott has been bought on as a full time grappling coach for the Gold Coast Suns. Although this is not a new concept, contact sports adopting wrestling into their programs, it is relatively new to the sport of AFL. Today I caught up with Scott to find out a little more.

BJJ Legends – So mate, can you give us a little bit of a background on yourself?

Scott Steer – Not a problem Luke. I started martial arts back in 1986 after watching the Karate kid movie, when I started kicking the walls in the hallway and my little sister. My parents thought it would be good way to channel my energy. There was a Judo club was 200 metres down the road, so that’s where it all began. The Sensei at that club was a Judo and Japanese Jiu Jitsu black belt combined with a boxing background as well. He has been a coach, father figure, best mate and mentor through my whole life. I trained many other styles but was drawn to competitive Judo as it is an Olympic sport. My first national title was at 15. I received my black belt in 1999 and have competed internationally for Australia and New Zealand.

BJJ Legends – That`s quite the background mate! Coupled with some excellent achievements. So as I mentioned in the introduction you are now working with a professional football team out here on the Gold Coast, tell us a little bit about the role and how you found yourself working with them?

Scott Steer – I started working with AFL clubs as a sports trainer before my time in the Army. After my military career I got back involved as a trainer again with the Gold Coast Suns on a part time basis. I became the head trainer for the 2017 season which allowed me to build great relationships with the coaches and players and once they knew my back ground they started to enquire about helping a few players that were in need of some confidence and aggression control.  The feedback was good and it evolved to now becoming the grappling specialist.

BJJ Legends – Excellent mate, a grappling specialist in Aussie Rules. It’s not a sport where I can see an initial use of grappling and slowing the game down being much use. How do you see the added training assisting the teams come game day?

Scott Steer – AFL is now a very contested ball dominated game now so grappling fitness is a great plus. Tackling comes under our umbrella too; where in AFL there are many rules on how to tackle legally. The control that is needed in grappling is very transferable to a tackling situation on the AFL field.

BJJ Legends – Nice! I can see the grappling skills and fitness helping in contested ball situation especially in a scramble to get back to their feet as well. To your knowledge are there any other clubs in the league who are employing a similar style of training?

Scott Steer – Geelong and Richmond are the only ones I know that have someone currently.  But most clubs have done a little over the years in such a physical sport having some grappling conditioning helps with overall toughness.

BJJ Legends – Obviously their success speaks volumes! How have the players taken to grappling, have any taken it up as an extra outside of football?

Scott Steer – Yes so far about 10% of the first grade side have been keen to grade outside of football. The players love what we have been doing and we are starting to see them execute some of the techniques during match simulation so that is pleasing.

BJJ Legends – That`s excellent to hear mate! I look forward to watching them take the field this year! Has the training you have been doing been specifically no-gi or have you cracked out the kimonos for any sauna session in the gold coast heat?

Scott Steer – Haha only no-gi so far. We will slowly build up to that as 90% have not done anything before.

BJJ Legends – Excellent, well I’ll be following the Gold Coast along closely this season that’s for sure mate! Thanks heaps for your time Scott, I look forward to chatting again later on in the year to see how it’s all progressing!

An Officer and a Gentleman: An Interview with Cook County Officer Joe Fiorentino

From Brasa to CheckMat with Leo Vieira