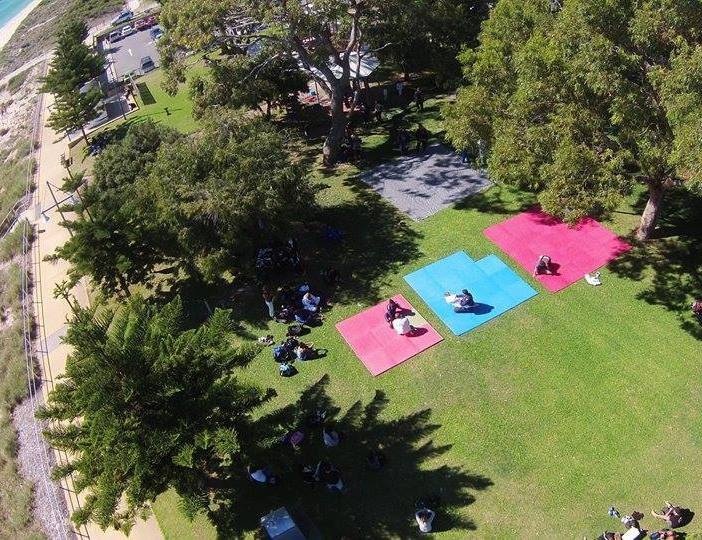 On the 27th of April 2015 the Western Australian BJJ Community came together to take part in an event that hadn’t been done before in Perth. It was an Open Mat hosted at the pristine location of Rockingham Foreshore. The idea was thought of after reading the BJJ Globetrotter by Christian Graugart.  The man behind the event, Luke Docherty decided to arrange a free event to not only bring the community together as one in a friendly non-competitive, non-affiliated environment, to meet new people within the community and to promote the art to the general public. Being rather new to the BJJ scene there was obvious trepidation about inter-school rivalries and the like, however the day went off without a hitch. With many comments coming back in about how good the vibe was on the day.

The event began at 10:00 and was started off with 2 pairs on the Mat, A self-proclaimed Mat Rat and blue belt, a 6 year old white belt Elise and Josephine Masiello (Black Belt, IBJJF Masters World Champion 2014). The quietness on the mats didn’t last long as everyone started to get into the spirit of the day and started rolling. The highlight of the day for me personally was seeing a young girl 12 years old Yellow Belt (Lexi) approach a Purple belt Johan Schoonbee for a roll neither of the two had met before but the Johan accepted and had a fun roll with Lexi and showed her a few tricks that she later put to good use on this particular white belt.  There was a wide variety of people attending with about 8 different gyms from across Perth having a presence. Every belt was well represented with a great amount of knowledge and technical skills on display. With the more technical guys not afraid to show the not so technical guys and girls a few new tricks of the trade.

Not only were the mats full from 10 till 2:30pm but the overall awareness was raised with general public walking by stopping with a coffee for a look, the odd person also asked plenty of questions about what was going on. Over the period of the day it is estimated that upwards of 50 people of all ages took to the mats to roll and enjoy themselves. A professional film crew filming the documentary “Tap Early Tap Often” were on location. The documentary takes a look at a local guy Anthoney Pietroboni a White belt who has been training BJJ after a Spinal Fusion and his journey into BJJ. Plenty of footage was taken and interviews were done with the majority of rollers happy to appear on camera.

Over all the event was a success and Free Rollers Perth will be hosting more events in the near future. If you are traveling to Perth, Western Australia and maybe interested in taking part, head over to our Facebook page for a look at the group and what is happening with our next events. We are hoping to hold these events at least every two months at outdoor locations around Perth.

The event would have been a lot harder to arrange if it was not for the help of several people including Helen Sarcich, Kingi Turnbull, Anthoney Pietroboni, Aaron Cadd for the use of their mats to help accommodate the numbers on the day, Nicole Docherty and Jac Qui Photography for capturing the day on film. Josephine Masiello for supporting me in hosting the event when I started to doubt the idea and spreading the word to her extensive network within the BJJ community.

BJJ in the UK