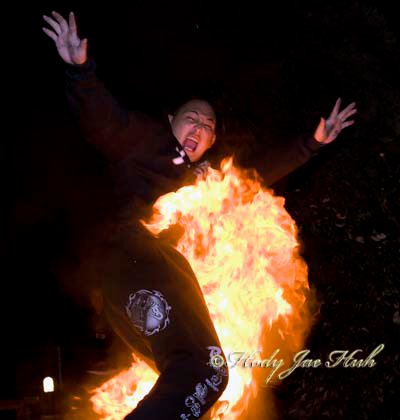 BJJL (Kris Shaw): How do you know Tyler and Marlin?Inoue: I want to say Facebook or, I think it was Facebook, you know. I don’t know exactly, but I’ve been in touch with them for a while there.BJJL: Now he told me about your seminar and I was so excited because you’re on my list with the magazine. I try to interview all the legends and you’re on my list. He said he was going to go to your seminar so I said, “You’ve got to hook me up.” My next question, you said that growing up in Hawaii was tough when you entered middle school. What island town did you grow up on?Inoue: I grew up on the island of Oahu and when I was, up until elementary school I lived in the valley called Manoa Valley and it’s a real peaceful valley, but in Hawaii when you go to intermediate school it combines the districts around that area so including Manoa there was two other districts so a lot of the Hawaiians got mixed in with the, you know… Manoa is a lot of American Japanese community so it mixed it in and that’s when things got really rough.BJJL:: I believe it. I assume you graduated high school in ’86. We’re the same age. Did you go to college or try trade school? Did you hold any interesting jobs right out of high school?Inoue: I went, while I was in school, even in elementary from intermediate school, I used to deliver a paper route. It was a pretty cool paper route because I would use it as a workout. It was an old folks home. It was an apartment complex and I had it set up where I would ride the elevator up with all the papers and I would drop a specified amount of papers at each elevator stop and I would get to the top and I would weave down the building through the staircase.BJJL: Do you remember anybody famous that you trained with back in ’88?Inoue: Yeah, so when I started training with Relson, the guys that I met up there was, I think it was Homero, Homero Calculera and the Gracie brothers trained with Rixon.  Royce, Rorian, pretty much all the Gracie brothers. I was really close to the Gracies then.BJJL: It was so early. It was even before, pretty much, the California scene took off.Inoue: Yeah, it was before anything, yeah. Relson came to Hawaii and he pretty much couldn’t speak English.  No one knew what Gracie Jiu-Jitsu was.BJJL: No, not in ’88. They hadn’t even had the first UFC in ’88. What was the last belt that Relson gave you?Inoue: Relson gave me up to my purple belt.BJJL: Right on. What year did you get your black belt from André and John Lewis?Inoue: I think it was ’98 or ’99. It was after my Randy Couture fight in ’98.BJJL: Did you travel to Brazil?Inoue: Yeah, I went to Brazil once and trained at Gracie Barra.BJJL: Did you ever train at JSEC with John Lewis?Inoue: Yes, I did. John actually, he was the guy who coached me when I went to Abu Dhabi and I fought Mario Sperry for the super fight.BJJL:  You competed in the Golden Age of MMA, which is also my favorite time. You fought with some of the greats like Frank Shamrock, Randy Couture, Mario Sperry, Mark Kerr, and Igor Vovchanchyn.  Is there one fight in your mind that sticks out that you consider your personal best?Inoue: As far as victory wise, it would be probably Randy Couture. As far as learning as a fighter and learning as a person and who I was, it was probably the Igor fight. Igor Vovchanchyn.BJJL: Why?Inoue: Well for Randy’s, it’s because it was one of the first times I was actually being considered one of the best fighters in the world after beating Randy. It was a victory that brought me notoriety throughout the world. As far as the Igor fight, it was the fight that actually pushed me to my limits and showed me what kind of man I was.BJJL: Wow. Are you still friends with any of these guys?Inoue: I just saw Randy at the MMA Awards last week.  I actually shook the hand that I arm barred.BJJL: Very cool. Your name is associated with… Yamamato Daimashii, which translates to Japanese spirit. What year did you move to Japan?

Inoue: I moved to Japan in ’90.  I’ve been there for 25 years, yeah. BJJL: You left without hesitation to help the victims of the 2011 Fukushima earthquake and tsunami before it was even safe to do so. You arrived before the aid workers with supply trucks. Why? Why did you go? It was radioactive. Were you exposed to much radioactivity? Did the police try and stop you?Inoue: Well, when I first went up it wasn’t into the radioactive areas. It was to the tsunami hit areas and I went and brought food and water and relief.  As I was making those trips… Well, I felt that, I heard that the people really needed assistance and I’m always that person that if I feel that I can do something to help, by all means I will try.