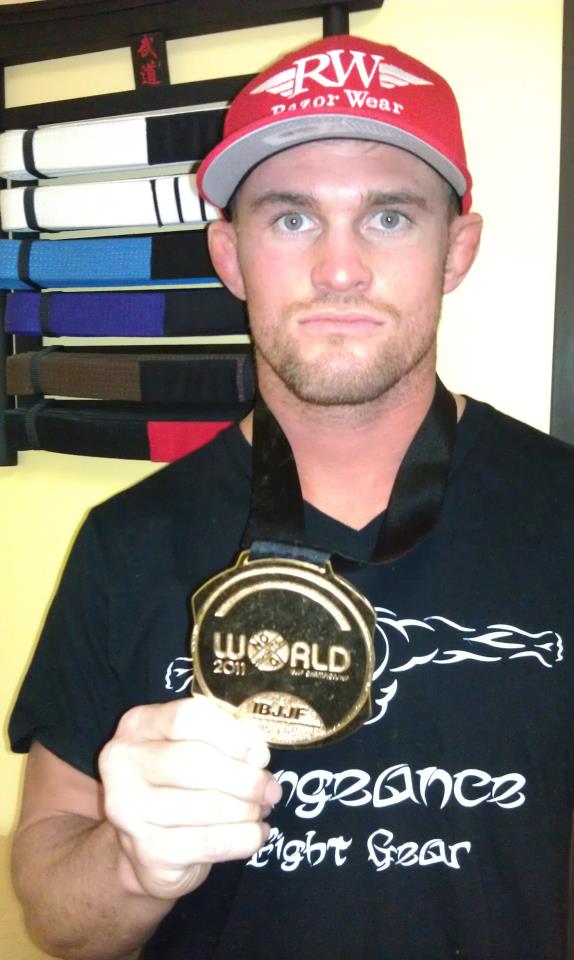 Daron Cruickshank is a UFC fighter. He was a fighter on Bully Beatdown, and he was on the TV reality show The Ultimate Fighter. Daron was born and raised in Michigan. BJJ Legends contributor Sharon Schleif caught up with him at their BJJ academy July 9th, 2013. They talk about the TV shows, preparing for UFC and Daron’s heavy involvement in the martial arts.

BJJ: I know you grew up in martial arts; can you give us a little bit of your family history?

Daron Cruickshank: Yes, both my parents were fourth degree black belts in Tae Kwon Do. They both had their own schools. My mom fought professionally, kickboxing and boxing. My dad cross trained in different martial arts, dabbled in savate and the JKD system. Then they popped me out. I’m like a hybrid.

Daron: Yes, I never really, I don’t remember when I started. I just always did it. I was always on the mat with my parents and doing their classes and things like that. I started, I would say, my athletic career in middle school when I stared wrestling.

I started wrestling in eighth grade, and I also picked up swimming. That’s where I really got serious with competition. I fell in love with wrestling. I did it all through high school, all through college, and then during the summers and things like that I would train with my dad when my mom was training.

Daron: The Ultimate Fighter was awesome. I enjoyed every bit of it. It was 13 weeks, my season. Most seasons are six weeks. I did over twice as long as most groups. The biggest thing that was hard is there’s no contact with the outside world.

A lot of guys have families, they have kids and things like that. They’re constantly wondering what’s going on, where I felt, I really didn’t think about that stuff. As far as girlfriends, drama, and stuff like that, that was probably the hardest part for most of the people on the show with me.

My biggest problem was there was no music. There’s no music whatsoever. No radio, no TV. Have you ever worked out without music? It’s hard. Try running on a treadmill.

BJJ: What do you think of the women being in The Ultimate Fighter? And would you like women to have been there when you were there?

Daron: I would have loved it. I think we were in the house for about six weeks, and then Ronda Rousey did a guest appearance for Team Cruz. Came in, worked with their team. Team Cruz always practiced before us.

As soon as they were done with practice, we were walking in. We were walking into the gym, those guys were leaving. We’re sitting at our lockers and a hot girl walks by. We don’t see girls at all when we’re on the show. There’s a couple girls that work there backstage, but we never see anybody.

She walked by, I’m like, “Who is that? Da da da.” I immediately ran to the bathroom and just took in the aroma. Like Ronda Rousey had sprayed her perfume. She had, like, where she wiped off her lipstick on a towel. She did that while I was there.

I ran out of the bathroom, “Hey guys everybody, come here and smell this. This is awesome.” Because you don’t have contact with anybody, especially like a hot girl or whatever.

If I was in the house with the girls now, I would probably be getting in trouble. Oh yeah, just to say the least, I’d get in trouble.

BJJ: I know you were on Bully Beatdown. I recently saw it, and it was a very exciting fight. Can you tell us a little bit about it?

The little Asian kid that was the kid that got bullied, he was real soft-spoken and they basically told me you got to be a big brother to this kid. He doesn’t talk much. He doesn’t know how to express his feelings and basically do all the talking.

I tried comforting to him and saying I’m going to beat this kid up and we’re going to get him back. I basically went in there, I submitted the guy five times within five minutes, and I knocked him out in 48 seconds. Out cold.

On Bully Beatdown, you’re not allowed to kick the head and you get three knockdowns where you get knocked down, you get a ten count, you stand back up just like a common kickboxing match. He didn’t get those chances to come back. I put him down. Those are the fun ones.

BJJ: I know you’ve done a few UFC fights, can you tell us a little bit about the training that you do getting ready for the fight?

Daron: When you’re getting and when you’re not getting ready for a fight, training is a lot more relaxed when you don’t have a fight scheduled. You still kind of stay ready, but once that fight is scheduled and you’ve signed a contract and you know it’s good, something changes. It’s just like a little trigger.

You take things more serious. You start to really watch what you eat and how much food you’re getting. Instead of playing video games all night, you’re definitely going to bed.

During the week, I’m training two, three times a day. I try to take at least one day off of training and do something else. That way mentally, you don’t get burnt out and physically you get to recuperate.

I do a lot of conditioning. That is my conditioning coach, Craig Funk, right over there [waves]. I love to do sparring. I feel like you got to really get in there to get ready.

BJJ: As you’re training in here a lot, we both train at the same gym, (Kaizen Brazilian Jiu-Jitsu in Plymouth Michigan) so I can see you training more than most normal people, and you look like you’re always having a good time. Can you tell us how much you enjoy all your training?

Daron: Here’s the thing, training, martial arts, everything that I do is what I like to do. If I didn’t do this, if I didn’t fun with it, then I probably wouldn’t do it. A lot of people take time when they get done with a fight to recuperate or just not train for a week or two.

If I did that, I would just sit at home and stare at a wall. This is what I do. This is how I enjoy life. So every time I come to practice, it’s a positive thing. I love to do it. I love my teammates, the camaraderie and everything, and just messing around. I try to have fun with what I do, but I’m serious about it also.

BJJ: Great. I know you have some UFC fights coming up but they’re not planned so we can’t actually tell anybody about them yet. Tell us about your future, what you plan to do in the future.

Daron: Future for Daron Cruickshank, eventually I would like to have my own gym, have my own team that I take care of and coach and bring up from stage one. I would say one of my MMA life goals, I think it’s funny but it’s to soccer kick someone in the face legally. To do that, I’d have to be in Japan or something like that. We’ll see if that ever happens. I like to try and put on a show for everybody when I fight. It’s the most important thing for me.

BJJ: Do you see a way for kids, little Cruickshanks, in the future?

Daron: Wife and kids? Well, I don’t know. We’ll see. If I run into the right martial artist and breed champions, I can’t stop it.

BJJ: A lot of UFC fights I watch anymore are mostly done with stand up. My question is how hard is it to get to Jiu-Jitsu or to do the takedowns?

Daron: Here’s the thing, in mixed partial arts, just like any sport, there’s trends, right? When Jiu-Jitsu or when UFC first started, it was Gracie family that went in there, took care of business, took it to the ground, and submitted people. That went on for a while.

Then wrestlers started taking over. Everybody that had a wrestling background would dominate the sport. Matt Hughes dominated the sport for a long time. He basically went in, took people down, and wore ’em out.

Now there’s this trend of striking. Everybody wants to strike. I feel like that’s a good thing because it’s exciting. I feel it’s just a rotation, just like anything else. The sooner or later, somebody’s going to be able to go in there and take people down and submit them real fast. I’m just waiting to see it.

Daron: As far as grappling, I started off with a wrestling background. I’ve only recently, maybe in the past two years, started to really concentrate on Jiu-Jitsu. My wrestling got me through a lot of amateur fights and most of my pro fights.

Now since I’ve started to really concentrate on Jiu-Jitsu aspect and technique, I’m starting to go in there and transform my wrestling skills to grappling skills, Brazilian Jiu-Jitsu skills. I haven’t yet put on a gi and everybody yells at me for it, all my coaches. I plan on picking it up.

BJJ: What is your favorite part of the martial arts experience, and what has it actually taught you in your life skills?

Daron: My favorite part is winning and making money. But there’s so much more to that. If I had a regular job, I would still train and do martial arts because there’s so many things you learn from it.

Obviously the camaraderie with your teammates and having fun and messing around and just enjoying life. Being healthy, health lifestyle that falls with martial arts. That’s always a plus.

The life skills you learn; there’s always injuries, there’s always setbacks. What you learn from constantly getting better or getting set back, working to break that barrier, injuries that you overcome all of the time, the little battles every day in practice. That’s what makes martial arts to tough. Mentally tough. Not only physically.

The physical part is huge, but I see a lot of people that just start out, they’re not confident in their life. They’re not able to just have a stress reliever. They’re always mad. Then you take a new person that’s like that and put them in martial arts. You teach them, and it’s a whole different person. They’re confident. They’re happy. They’re stress free. Things like that. That’s ultimately the best part about doing mixed martial arts.

BJJ: What kind of advice could you give to a nice, young teenager that wants to get into martial arts, that wants to be a UFC fighter?

Daron: I would say, always come to each mixed martial arts or different styles with an open mind. If you think you know everything, you’re not going to learn anything. You got to be open.

BJJ: I know you’re an instructor for MMA. How much do you enjoy teaching?

Daron: The best part about being an instructor is actually having guys, teaching someone something, watching them go out in competition and actually do what you taught them. That’s the best feeling.

BJJ: Thanks Daron for a great interview.

Daron: One more thing, can I thank my sponsors and coaches?