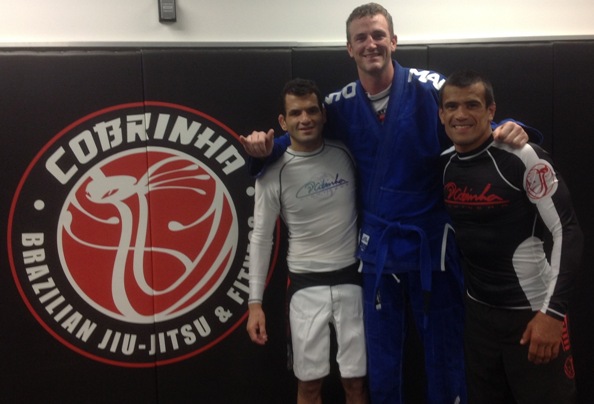 Roughly six months ago I decided to go to Los Angeles over Labor Day weekend for the sole purpose of meeting up with some of my jiu jitsu e-friends and to take advantage of the world class instruction that the city has to offer.  This trip was about immersing myself completely jiu jitsu and training full time.  Over the next four days I met and trained with dozens of amazing people including some legends of our sport.  Traveling back to St Louis on Monday I was re-energized and excited about my training in a way that I hadn’t been previously.

Day 1 – In which I fly a few thousand miles, enjoy jet lag and meet the exuberant Cobrinha

Cobrinha’s school, located on the bottom floor of an office building, offers BJJ classes 7 days a week.  The school is one of the nicest I’ve ever been too and the instruction from Fabio and Cobrinha is excellent.  The class I attended was taught by Fabio (one of Cobrinha’s black belts) and had a mix of white and blue belts with a few purples.  Fabio did an superb job demonstrating techniques and drills.  He actively walked around the room giving pointers and extra attention to anyone that needed.  He addressed everyone by name, me included, and ran an excellent class.

We finished the class with several rounds of rolling; the students were consistently technical and showed excellent control.  As the class was winding down I had a few minutes to talk to Cobrinha before he taught the advanced no gi class.  Cobrinha is one of the nicest people I’ve ever met and his energy is infectious.  It’s easy to see why Bruno Malfacine calls Cobrinha his favorite training partner.  The experience was exceptional and I’d highly recommend to anyone that has opportunity to train at Cobrinha’s.

Day 2 & 3 – In which I meet more world champions, have Andre Galvao coach someone against me & experience the Art of Jiu Jitsu

Based on appearance it wouldn’t be hard to mistake Art of Jiu Jitsu Academy for an art gallery.  Everything is white with splashes of color from art, framed gis and the dozen or so medals at the entrance.  I was immediately greeted by Isas at the front desk, shown around and pointed at the locker room to get ready for my first class at AoJ.

Professor Gui Mendes taught the morning class, which was the largest lunchtime weekday class I’ve ever been to (over 2 dozen students from white to brown belt).  There is ample mat space and as you already knew the instruction is world class.  The class was 90 minutes with drills, techniques, situational rolling and finally free rolling.  Drills and techniques focused mostly on the De La Riva guard and standing passes.  The rolling styles of the AoJ students were what you’d expect from a Mendes Brothers student.  Most had very aggressive open guard games with a focus on DLR.  I rolled with white thru brown belts and everyone made me feel welcome, had controlled games and a solid technical understanding of what they were doing.  I enjoyed the class so much that I came back that afternoon and the following morning.

Friday night during the free roll portion, Andre Galvao and Rafa came over to watch everyone roll.  Somehow during the rolling I managed to get partnered up with a young woman from Brazil.  During our 5 minute roll she worked one of the most aggressive DLR games that anyone has ever worked against me and all the while she’s being coached in Portuguese by Andre and Rafa.  A very long 5 minutes but also one of the most fun rolls I had all week.

If you’re ever in the Costa Mesa area I’d highly recommend checking out AoJ.  The combination of world class instruction (and not just from the Mendes Brothers, the 4-stripe purple belt that taught Saturday was one of the best BJJ teachers I’ve ever had), highly accomplished students and excellent amenities make AoJ a must see if you’re in the area.  In case you’re wondering if everyone there is a full-time athlete, that’s not the case.  There are moms and dads that will never compete right next to past, present and future champions.

Kris Shaw was able to get an invitation for us to train with Chris Haueter at his garage.  Chris was the 5th non-Brazilian be awarded a black belt (from Rigan Machado in 1996) in BJJ and a member of the Dirty Dozen.  The entire morning was surreal and something that I’ll never forget.  There were about a dozen of us training that morning with 6 black belts (two were 4th degree), 2 purple belts, 2 blue belts and one white belt.  The rolling was fantastic.  Each of the black belts would stop in the middle of rolling to give out pointers and tips.  Being around that many people with a passion for BJJ, many of whom were integral in the development of BJJ in the US, was a once in a lifetime experience.

My most memorable roll was my second time rolling with Chris.  I had him pinned on his shoulder and was getting ready to take his back (at least I thought I was).  He looked at me and said, “If you not going to do anything I’m getting out this” calm as can be.  A second later I’m on my back, flattened out, thinking “what the hell just happened?” and that pretty much sums up rolling with someone that’s been on the mats for over 3 decades.

Tips for anyone that’s planning on taking a trip just to train.

Finally, huge thanks to everyone that helped me plan this trip and opened their doors (and homes) to me.  If you’re ever in LA I would whole-heartedly recommend visiting the schools mentioned above.  I couldn’t have asked for a better experience.