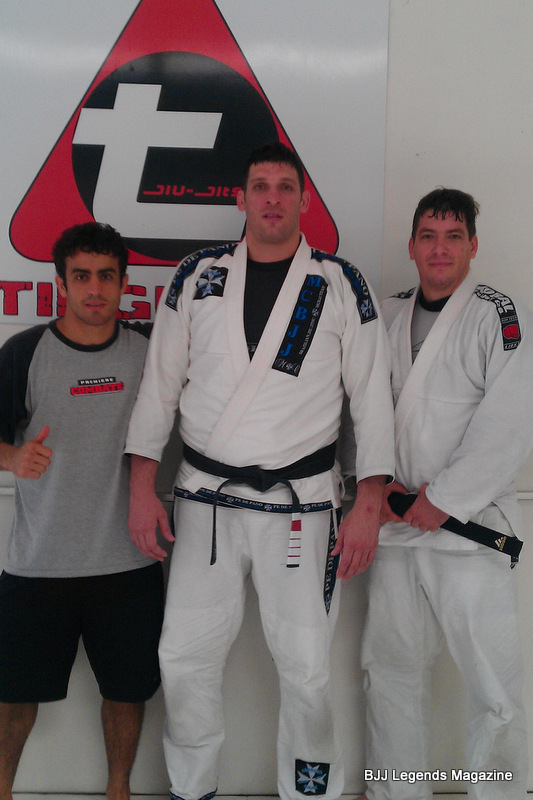 Former UFC fighter and BJJ World champion says, “When I went into MMA I lost my BJJ.” This prompted a lively exchange about training and the philosophies around training and cross training. As an example Marcio states, “In MMA when someone has you in side control you push away, in BJJ you don’t, you have more options.” He has the perspective of a seasoned Brazilian black belt and knows the power of Jiu-Jitsu. He continued, “I believe you’re not going to be good without the gi.”

Márcio is a third degree black belt. He received his black belt in four years from Carlos Gracie Jr. When I countered with, “Carlinhos? Carlinhos doesn’t do that!” Pe de Pano said, “That’s what Carlos said when he gave me the belt.”

Márcio is married, living in Tampa Florida and has two kids. Marico is the head instructor of Marcio Cruz Brazilian Jiu-Jitsu (http://newtampabjj.com/) in Tampa Florida. When asked about kids and BJJ he believes that training for kids should be fun. If they pick up some striking it’s not based on a rigid form but as a game. He says, “I don’t like kids doing conditioning. They should be having fun.”

Márcio, his brother Cruz and brown belt Rafael Pereira will be in SoCal for two weeks leading up to the Worlds May 29th – June 2nd. He isn’t competing in this year’s Worlds; he is here to support his teammates. They are training with Mauricio “Tinguinha” Mariano in Yorba Linda, CA during their stay. Says Márcio of Tinguinha, “When I want to the academy I remember Tinguinha was a brown belt when I was a white belt.”