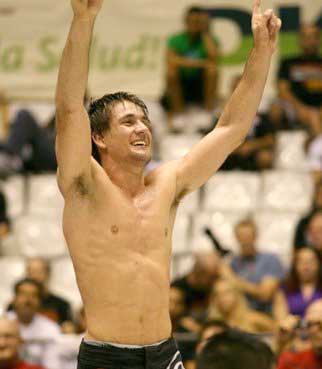 This time with the ADCC finals in September, and in the UK.  Compeitors can easily swing going to each if they manage the trials well.  The World Pro’s first days was set with excitement.  Rodolfo Vieira moved to the finals in the Absolute and his division.  Rodolfo will not have it easy as he faces Rafael Mendes of ATOS.  This match up will be a stregnth vs technique battle as Rodolfo weighing in at about 200lbs has over 55lbs on Mendes at 145lbs.

[social][/social][einset][/einset]Raf has just a hard battle against his brother Gui in the Under 65 KG division finals on Saturday, where bother vs brother for the gold.

Via Facebook Pages here are comments from Mendes and LLoyd Irvin posts….

WORLD PRO 2011 NOGI: We are very happy, because today was a GREAT DAY! Frazatto, Ed and us closed the brackets!! It was awesome!! Tomorrow we (Gui and Rafa) will fight the final of the division! the greatest news of the day: RAFAEL IS IN THE OPEN CLASS FINAL tomorrow!!! He is gonna fight against Rodolfo Vieira. All our guys from Atos …did very well! Special Congrats to Caporal and Davi for the -74 division! And Thank you all guys for the great support on the Open Class, the team fought together! Thank you guys! Thank you dear God.

Team Lloyd Irvin Putting In Work in ABU DHABI- DJ Jackson is in the finals of his division and the Open division! Jimmy is in the finals of the Black Belt division! JT submits his first guy RNC, then beats Gilbert Burns 5-0(take down + guard pass) in 2nd match but gets injured and has to pull out taking 3rd. Pere gets DQ, waiting on Kenny’s results

Now a look at the Finals:

What will your excuse be this year?