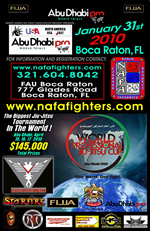 The World professional Jiu-Jitsu Cup 2010, to be held the 15th, 16th and 17th of April in Abu Dhabi, in the United Arab Emirates.

According to Carlao Santos, the sum of 145 thousand dollars will be up for grabs, to be divided among all belt groups. And for the ladies, the champion will take home four thousand dollars and runner-up takes two.

With the exception of Brazil, the dates for the tryouts for the event to be broadcast on network tv in Abu Dhabi, which is transmitted to over 30 countries, have been defined.

East Coast Trials BOCA RATON, FLORIDA JANUARY 31, 2010  FLORIDA ATLANTIC UNINVERSITY VENUE
* The date for the Brazilian trials is yet to be confirmed. The organizers expect to hold one in Rio de Janeiro and another in the South of the country