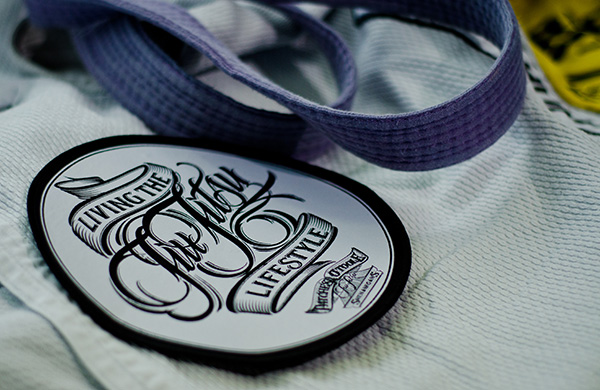 Snappy interview with Patches O’Toole owner Aengus Ryan, we have a chat about the brand, what the thinking was behind it and what are the plans for the future.

Those of you with an ear to the ground for the latest BJJ gear offerings may have heard of a new name popping up lately, that of Patches O’Toole. Patches O’Toole dropped onto the BJJ gear scene at the start of 2014 with a range of gi patches, quite unlike anything on the market. Some were reminiscent of old style tattoos, some focused on hand drawn lettering, whatever the style, they were pretty awesome.

Other than the cool designs, the one thing that stands out with these patches is the quality. All of the patches are embroidered, to the highest standard. The great thing about this is that they will last for years. Many of the printed patches I’ve had during my time doing Jiu-Jitsu have worn with the constant friction from the mats. This should not be a factor with these one’s as there is no print to rub off. Patches O’Toole are so confident with the quality that they have a 3 year warranty on all of their patches, which is saying something. The shipping is also free on all patches which is cool, as no one enjoys getting hit with shipping costs as they reach checkout.

Hey Aengus, so can you tell us a bit about where Patches O’Toole came from and what’s with the weird name?

Lol, sure. I’ve been playing BJJ for a good few years now and like most of your readers, would consider it my passion. I’ve always wanted to help to promote the sport somehow but was never quite sure how I could contribute. I’m a graphic designer by trade, so one day I thought of the notion of combining the two things I spend most of my time doing. It was a kind of marriage made in heaven type affair, getting to produce things that people enjoy while doing what I love, so I’m pretty pleased with how things are going.

The name is an odd one, I agree. Bit of a mixed story as to where it came from. Myself and my wife used to have a goldfish called Patches O’Toole that had a few white patches on him. Why we added the O’Toole bit – who knows, I think it was just to add an Irish twist to it. Some people think it’s from the dodgeball character, but that dude was Patches O’Houlihan, lol.

In terms of BJJ players out there, who would be some of your favorites?

I’m not really a fan of a lot of the more recent BJJ styles, the 50/50 or the sitting on your butt double guard pulling shenanigans. It’s not exciting and while it’s clearly very technical, it’s boring to watch. Guys like Galvao and Braulio Estima are cool, really exciting Jiu-Jitsu, which is great from a spectator point of view. I used to love Roger Gracie’s total top domination and how Jacare would incorporate Judo. An epic throw is infinitely more exciting to watch than two dudes scissor banging each other.

Would you like to end up sponsoring any of those guys?

For sure, that would be awesome. We only got going in January so I think that’s a way off, but certainly something to work towards. I’m a big believer in building from grass roots, so looking after local tournaments is something I will be looking to in the future, build things up slowly and help contribute to the local scene. We can’t all go all in straight to the top, there are valuable lessons to be learned by building a business up one step at a time.

So have you found the BJJ community responsive to the Patches O’Toole designs?

Yes indeed, those who like what we do have been great and I’m extremely grateful to them. Ours is a very niche sport in the grand scheme of things and the BJJ community is always great at getting behind our own and helping out. Of course the designs aren’t to everyone’s liking, but hey, they are artistic and styles of art please one person more than the other, it’s would be boring if everyone liked just one brand or listened to one type of music. Our personal tastes and individuality are great.

So what can we look forward to from you guys in the future?

I have a few ideas for some patches I would like to bring out, along with one for kids which quite a few people have been requesting. Some stuff for the ladies only would be good and I have also started kicking around some ideas for a rash guard. The rashie would need to be pretty epic, so that’s something I want to sit on for a while to make sure it’s just right before I release it.

Is there anyone in particular you would love to train with?

I’ve always wanted to go train with Saulo Ribeiro, I think his Jiu-Jitsu is so solid and his teaching style so easy to learn that I couldn’t help but pick up lots. Fabio Gurgel and Caio Terra are others that stand out too. Any of Caio’s instructionals I’ve watched have been very easy to learn from and I’ve always thought being excellent at conveying how to do things displays a deep understanding of the art.

Thanks for the chat Aengus & we’re looking forward to seeing what’s next from Patches O’Toole.