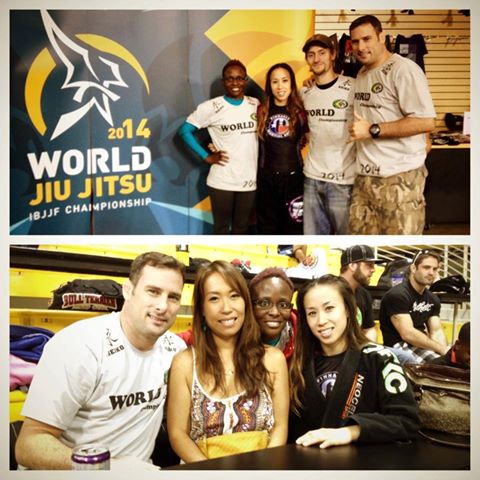 Deneatra talks candidly about shutting down and fighting back at her first Worlds. Deneatra suffers from PTSD stemming from a brutal assault.

If you have never been disoriented, a hyped-up athletic competition certainly can get you to that point. In Brazilian Jiu-Jitsu, the Worlds is like the Olympics for all other sports. The best-of-the-best come from all over the world to compete for the opportunity to say I am the World Champion.

The moment I stepped onto that mat at the Pyramid Arena, I couldn’t hear a thing. In that split second, I withdrew. All these thoughts of ‘firsts’ started rushing through my mind. My competitor and I shook hands…Combatchee. The next thing I know, I was flat on my stomach and completely disoriented. I wasn’t sure where I was or what I was doing there. I felt pressure thrust into my back and I had a flash of me training for the very first time, no confidence, no desire, no idea where the journey would lead.

All of a sudden, a familiar voice brings me back to the room. It was faint but I could hear someone shouting to me and I couldn’t quite make out what was being said. A flash hit me again and I was seeing my very first competition, so clumsy, so unsure, and not able to tell which voice I should listen to. I feel a shift as I turtle and the voice became clearer. I heard my professor guiding me. I was back in the room and begin to realize my competitor was attempting to set me up for an arm bar. At that moment, my face got scratched and again I was gone, back at my home based gym attending my first competition training. I was preparing for Worlds. I was focused; I was confident. I am borderline psychotic about my training regimen.

Once again, I heard a familiar voice. This voice was different; this was the voice of a teammate. This was the voice of the teammate who had consistently helped me train since I began my journey in BJJ. She had trained with me daily, prepared me for every competition, and helped me get to Worlds. The moment I heard her voice it was as if all the what-ifs began to subside. I fully returned to the room and back to reality. I was able to capitalize off my competitor’s arm bar attempt and passed her guard. The moment that happened, it was as if no one else was in the arena. I could hear two voices and only two voices.

By now, my competitor and I were standing. I attempted a single leg take down; she stumbled but did not fall. We were evenly matched position for position and then…. TIME. It was over. I let out the biggest sigh and smiled. When I began BJJ, I had no idea where it would lead. I was proud of what I had accomplished. A year has passed since I took my first step in BJJ and little did I know my first step towards Worlds. I am 31 years old. I started BJJ at 30. I attended Worlds as a one stripe white belt and I lost. My loss was a victory to me. I showed up, I utilized my training and I know that I left everything out there on that mat. I have NO regrets.

Deneatra M Terry is a white belt at  training under 3rd Degree Black Belt Bruno Alves. BJJ Legends is excited to welcome Deneatra to our family of bloggers.