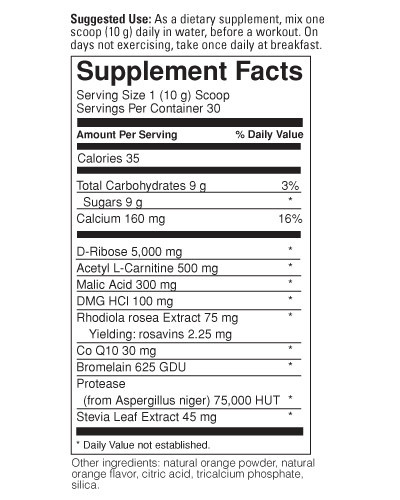 Pre-workout stimulants are old hat for many folks out there.  There are hundreds of products that are intended to give you an extra burst of energy, enhanced mental focus and/or make your workouts more effective.  Caffeine, ephedrine and other stims are the mainstays in these products.  But what are some options for those looking for a non-stimulant pre-workout product?  There aren’t nearly as many.

Non-stimulant pre-workout products tend to focus on the “pump” while hiding behind proprietary blends.  Beta alanine, citrulline and branched chain amino acids are included in many of these products.  While they may do what they claim to do I’m not to sure that’s what I want in a pre-workout.  Can you imagine how fried your grip is going to be when you’re taking a product specifically designed to increase the “pumped” feeling you get while training?  I’m more interesting in being able to focus and roll than I am in seeing my veins or getting swole.  With that in mind Q5 Labs has developed a non-stimulant pre-workout supplement specifically for BJJ athletes, Launch Fuel.

We’re going to start off with the brass tacks.  Launch Fuel is available for $59.20 USD here.  Each container has 30 servings.  With a little math magic we see that each serving costs just under $2.  For comparison my usual pre-workout supplement is a liter of diet Mountain Dew that I get for $1.75 (and yes I really do drink that before class, ask anyone who’s seen me walk into the gym at 8am with my 2 girls.  Don’t judge me.)

We’re going to work our way thru the label to see what’s in here and why.  Our first ingredient is D-ribose.  That’s an easy one, it’s a simple sugar.  The final ingredient is Stevia.  Also an easy one, Bill didn’t want this to taste like crap or have a lot of calories so he used the most “natural” non-caloric sweetener available.  Malic Acid is commonly used as food additive for enhancing tartness.  That covers the taste, a little sweet and a little tart.  Next up, the ingredients that are a bit more interesting.

Acetyl L-carnitine is found in high concentration in red meat and diary products.  Other sources include
: nuts, legumes, veggies and some cereals.  The “L” isomer is the biologically active form of carnitine.  L-carnitine is involved in the biochemical actions within your body that produce energy during exercise (9).  As a pre-workout supplement we’re most interested in carnitine’s ability to affect cognition.  Several studies have been published to determine the affects of supplementation on elderly patients with dementia.  Two studies in particular demonstrated an improvement in mental acuity in Alzheimer’s patients (10) and cognitive function in centenarians (11).   Most of us aren’t going to meet the demographics of these studies, however the data is pretty good and the studies are well-designed.

Dimethylglycine (DMG) is a derivative of glycine (commonly found in beans and liver).  DMG has been suggested to help with athletic performance as well as mitochondrial disorders.  Mitochondria generate energy for cells and these disorders are relentlessly progressive and can be fatal.  The data supporting the use of DMG for mitochondrial disorders is mixed but studies are ongoing to determine the role (if any) in treatments (2).  The improvement to athletic support was not substantiated in the one trial that I found (in horses & from 1989)(3).

Rhodiola rosea has been suggested as having providing benefits to many conditions, ranging from fatigue and anxiety to cancer.  There are a lot of studies on Rhodiola in Pubmed if you’re interested.  The study that is most applicable to this product reviewed the effects of Rhodiola on endurance performance (4).  In this study 18 riders did a 6-mile time trial (TT) and recorded the rate of perceived exertion (RPE).  The authors concluded that Rhodiola appears to decrease heart rate during sub-maximal exercise and improve endurance by decreasing the perception of effort.

Co-Q10 has an enormous amount of information associated with it and its possible benefits.  Specific utilization to exercise performance has been studied and shown to provide possible benefits (5,6).  However, the doses in most of these trials are quite a bit higher that what is found in Launch Fuel.

Bromelain is extracted from pineapples and is a very popular meat tenderizer.  It has also been studied for potential anti-cancer properties, as an anti-inflammatory and for osteoarthritis among other things.  Two selected studies suggested some interesting effects of bromelain.  In the first, supplementation with protease, bromelain and papain improved muscle function after eccentric exercise (7).  Another very similar study, bromelain with a handful of other supplements, showed a benefit to decreased delayed onset muscle soreness (DOMS)(8).   While the studies showed some benefit it’s hard to say if what ingredient(s) are most responsible for the changes as the studies included proteases and other ingredients.  Protease is a somewhat generic term for any enzyme that breaks down protein and has been included in the research reviewed above.

Wrapping It Up:
Launch Fuel is an interesting product and unique among the pre-workout supplements that I’m familiar with.  It’s definitely stimulant free (so I can keep drinking my diet Dew) and its ingredients are geared toward improved cognitive function.  Improving our ability to process and assimilate information while training is critical to progressing in BJJ.  If you’re someone who find his/her mind wandering during technique or maybe you just want a little extra focus Launch Fuel might be the product that you’re looking for.  For a few more reviews check our William Wayland’s review at Powering Through and BJJ Paperweight.  My personal experiences with the product mirror Williams: a subtle improvement in focus/clarity and an improvement in RPE during training.

Brazilian Jiu Jitsu and the Culture of Performance Enhancing Drugs