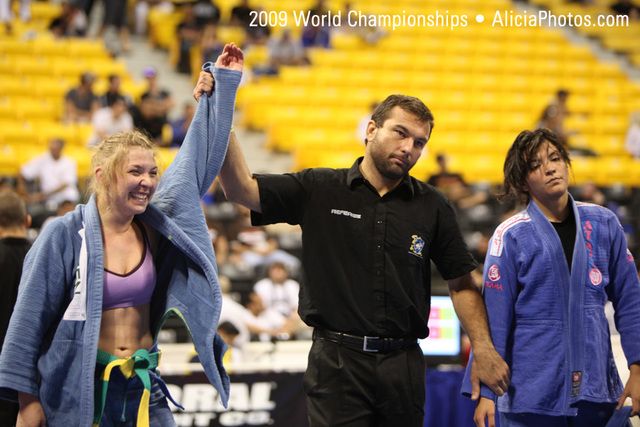 Did you know that the first American Made gi debuted in the 2009 Mundials?  Another fun fact, it was made of hemp.  Adrienne of the Green Gi has been working for the last 4 years to bring American Made 100% Hemp gis to the masses.  We took a few minutes to learn more about the Green Gi, Adrienne and the process she went thru to bring her gi to us.

BJJ Legends: Tell us a little about you and your team, your training, etc.

Adrienne: After being tricked into taking a private Brazilian Jiu Jitsu lesson with legend Relson Gracie in 2006, I immediately started training under Dave “Rock” Jacobs at Fairfax Jiu Jitsu and Fernando Yamasaki of Yamasaki Academy and received my purple belt from them in 2009.  Even though I live in a different area now, Rock and Fernando and the academies remain an important part of my BJJ family and have been very supportive of my jiu jitsu journey no matter where it has taken me.  Now that I live in Virginia Beach I train under Scott Oates of Hybrid Training Center which is a Saulo Ribeiro affiliate. I stay active in the sport by helping teach the kids’ classes at Hybrid and try and get in a few classes for myself as often as I can. I’m also reffing grappling tournaments, judging MMA events, and an instructor at a nonprofit that provides free women’s self-defense to the community.

BJJ Legends: What made you decide to start your own gi company and more specifically why hemp and American made?  When did you start The Green Gi?

Adrienne:  I kept seeing my teammates with torn gis, or gis that were wearing out a lot faster than any of us would like, and so many of them with Stinky Gi Syndrome (SGS) you know, the ones that smell like their gi came from the kitty litter?  I was repairing gis for my teammates on my sewing machine at home, the consistent poor craftsmanship and the issues across the board began infuriating me.  If I could easily see the issues among the various brands, why weren’t they themselves noticing, let alone doing something about it? In manufacturing there is a practice called “planned obsolescence”, which is planning how long they want your stuff to last before it breaks down and you have to buy a new one.

My search led me to start looking for an American Made gi and there were NONE! In 2009 I was fed up with it and I decided that I wanted to make a gi that would last and that I could feel good to stand behind. I knew immediately that it needed to be American Made and that hemp was a much more durable fabric than plain cotton, so I started experimenting with different types of hemp weaves to make our prototypes.  The strength of hemp, along with the anti-bacterial properties, pretty much sold me that hemp was part of the solution… and viola! The seed was planted and grown into The Green Gi.In 2009 I debuted The Green Gi’s hemp gis at the Mundial Brazilian Jiu Jitsu World Championships as the first and original American Made gi and the immediate interest that the brand received told me I was onto something. There were days that I had received 50+ emails and I knew the concept was something that needed to be brought to the market. At that time there were no American Made gis to be found and I committed myself to finding stateside manufacturing and was quickly, eagerly and emphatically told—to put it nicely—that I was an idiot for a multitude of reasons and that the brand would never be successful.

Regardless I knew that it was possible to utilize both alternative textiles and stateside manufacturing. I wanted to make sure our gis were cut and sewn in the United States so we could some sort of control over the conditions of the people actually doing the hand sewing. I want to make sure that our products are good for the environment, good for our customers, and that we’re supporting fair labor practices and when possible local economies.  Another benefit to having our manufacturing happen in the US is that we can drop in and see the gis under construction whenever we’re in town and have the ability to monitor the quality of our product throughout the process.  We like being able to truly partner with our manufacturers.

As a small and new business owner you aren’t always taken seriously and I had many doors shut in my face. However I stuck to my guns and finally overtime I built up a great network of industry professionals and contacts that have at last brought The Green Gi to a point where we are taking pre orders and just about ready to go into production!

BJJ Legends: Origin recently started American made gis and Shoyoroll has also announced that they’re going to move to the US.  Neither of them is using hemp.  What are some the hurdles that you had to go thru to get the line launched?

Adrienne: The biggest issue is that it’s currently illegal to grow hemp in America. The logistics of working with foreign companies make the process very complicated. There are law-makers that are actively trying to have hemp legalized to be grown as a cash crop, and we’re very excited about the progress that Kentucky is making right now.  We would love to be able to get our fabric here in the US, too, so write your congressman!  We love that other gi manufacturers are also looking for American production.  It’s nice to see that other members of our community are making the ethical choices, instead of trying to maximize their profit.

BJJ Legends: What makes the Seedling different from the other hemp gis out?

Adrienne: The Seedling will have the best warranty of any gi on the market, hemp, cotton, or any other fabric.  We’ll be offering an unprecedented warranty on the fabric and construction for 2 years (assuming normal wear and tear).  We only know of one other company that offers a warranty of more than 6 months. We are putting our money where our mouth is, we aren’t in the market of providing disposable gis.

Our prototypes have hundreds of hours of mat time.  We have looked at every stitch on the prototypes, and we are making improvements in all of the places that gis tend to fail.  We want our gi, and the investment our customers are making, to last.

A key difference is our gusset. Gussets redistribute force in the crotch area to reduce tears, but more importantly gussets are intended to provide additional mobility. If you look at gussets in regular pants (which I’ve done a lot of!) and talk to seamstresses you’ll quickly learn that gussets are generally cut on the bias. What this means is that the fabric is turned 45 degrees. When you pull on fabric that is cut on the bias it stretches, which is good for areas you want to have improved mobility. I have yet to find a gi brand that is cutting their gussets on the bias. There is one small but important detail in the pants that sets us apart and also illustrates the amount of thought we have put into the product.

We’re excited to see so more hemp gis hitting the market.  I think that giving customers’ choice is very important, and I’m sure that these alternatives will help us spread the word about the softness and durability of hemp.  Ultimately, this could also help with getting hemp grown stateside.  While our first gi is hemp, we have plans for other designs made from a variety of fabrics.  I’m looking forward to bringing those to market, too.

Thanks for giving us this opportunity to talk about our product, and how we got here! For more information check us out at the website, Facebook and Twitter.