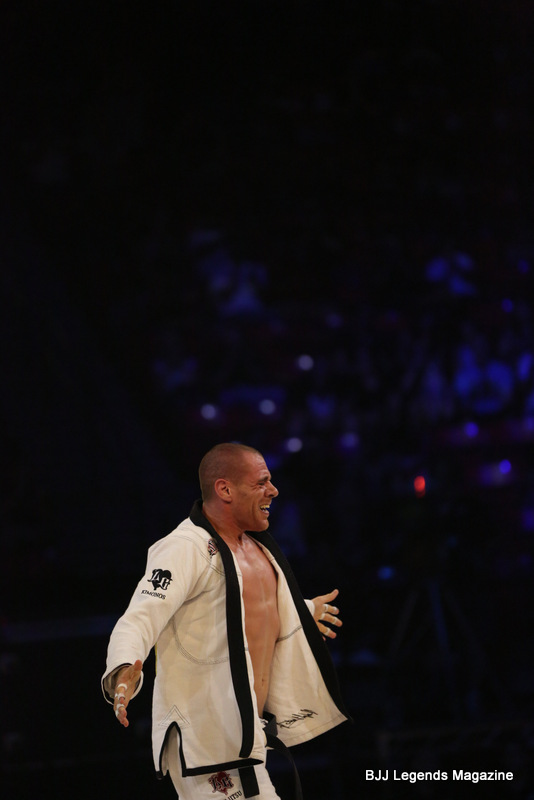 Rafael Lovato defets Kayron Gracie by kimura in 11 minutes. Best picture of the night. Metamoris is a big stage. You cant get this kind of picture at the Worlds or Pans.

Caio Terra beats Jeff Glover by armbar in 14:30 minutes. Terra vs. Glover was my favorite fight of the night. Glover is spontaneous and unpredictable. Terra, hip to the game, does not take the bait. Glover oversteps and finds himself unable to defend.

Renato Laranja choked by Rose Gracie. Metamoris has star power. BJJ Royalty was in the audience, Rickson, Renzo and Jean Jacques Machado to name a few. The list goes on and on.

Tony Torres introduced Andre Galvao. Seeing Tony was like visiting an old friend. I grew up on Tony’s voice at the IBJJF tournaments. “Ddd. Qqq.!”

Andre Galvao vs. Ryron Gracie ends without a submission. “Keep It Playful” and “GJJ” and “Self-defense” are terms that have been used to describe Ryron’s game. In my game I often hear, “You defend really well.” and I hate it. Its a consolation prize. I’d like to hear, “You submit really well!”

Andre Galvao after his match with Ryron Gracie. Did you notice the belts? Looks goofy but the taped belts work GREAT. There were no wardrobe adjustment breaks. The fight momentum never stopped. Maybe next time black tape?

Marcus “Buchecha” Almeida vs. Roger Gracie ends without a submission. The press photographers were sequestered on a scaffolding with the commentators. With the exception of one lone photographer, who was that guy? Because there were so many of us and because we could not move around we all ended up with the same shot or in this case the same blocked shot. It was frustrating when the ref sat down between the bullpen of photographers and the fight.

Robert Zeps and Ralek Gracie. This guy, Robert Zeps is an enigma. I’ve read both of Caleb’s interviews (Parts 1 and 2 ) at theFightWorksPodcast.com  and still want to know more. Robert is independently wealthy and a lifelong practitioner of martial arts. He lives and trains Jiu-Jitsu in San Diego. I want to know is he a media mogul? Is staging a million dollar(? I assume) event in his purview or was this just a big a leap of faith for him?

Wrap-up? I for one would like to see no time limits. Impossible you say? There are only six matches. It’s doable. I was at the match so I did not experience the live stream or hear the commentary.

Thank you Robert Zeps, Ralek Gracie, Sarah Oldfield and everyone Metamoris Pro for the opportunity to attend this historic event. I know the popularity will continue to grow and the matches will be even better.