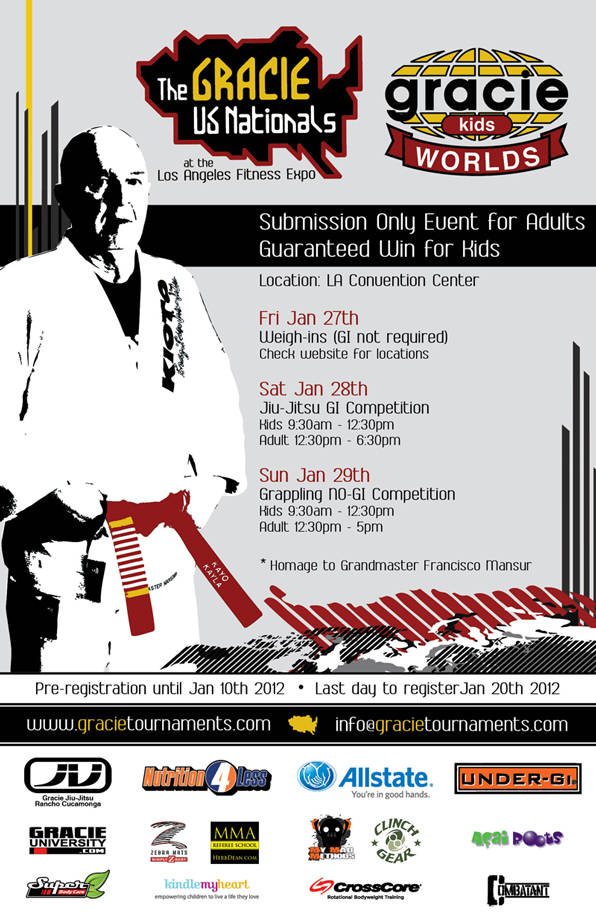 (Los Angeles, Calif…January 2, 2012)   For the fifth year, The Gracie US Nationals along with The Gracie Kids Worlds will continue to set the standard for Jiu-Jitsu and grappling tournaments as they are presented in conjunction with California’s largest fitness event, The Los Angeles Fitness Expo, Saturday and Sunday, January 28-29, 2012 at the Los Angeles Convention Center, 1201 South Figueroa Street, South Halls G & H.

“We’re honored to once again be working with Rose Gracie from the legendary Gracie family on hosting The Gracie US Nationals and The Gracie Kids Worlds,” said The Los Angeles Fitness Expo Executive Director, Erin Ferries.  “They have grown tremendously each year along with the Expo, and we love the synergy they create for attendees and competitors alike.”

[social][/social]“The Los Angeles Fitness Expo audience is our audience, and we’re delighted to return in 2012 with both competitions, said Rose Gracie. “Last year, 735 athletes competed and we’re looking forward to an even larger field this year.  Our goal is to always put on first-class competitions that promote the pure art and philosophy of Jiu-Jitsu that has been passed down through the Gracie family for generations.”

Rose Gracie has made significant changes to the rules of both events in an attempt to bring back the original Jiu-Jitsu that her grandfather, Grandmaster Helio Gracie, had envisioned from the beginning.

For 2012, The Gracie US Nationals will switch the current point system to a submission-only event. This will prevent several issues previously faced in the competition, and will also give the competitor 100% power over the outcome of the match.  In an effort to keep the sport pure, The Gracie US Nationals will be doing random testing of competitors for performance enhancing drugs.

The new focus for The Gracie Kids Worlds is that all kids will get a chance to compete and learn from the experience in a supportive and encouraging environment so they can go back home happy to work on the things that they need to improve on.  No child will leave the tournament with a sense of defeat.

The Gracie US Nationals and The Gracie Kids Worlds will be paying homage to Grandmaster Francisco Mansur, and this will be the first time that a person with the last name Gracie is not headlining the event. Mansur is considered to be part of the Gracie family, like an uncle. He is a 9th degree red belt (the highest ranking allowed in Jiu-Jitsu since the passing of Helio Gracie) and one of the pioneers in writing several rules such as the belt systems that are in place in Jiu-Jitsu today.

Registration to compete in The Gracie US Nationals and The Gracie Kids Worlds ends on January 20, 2012.  More information can be found at www.gracietournaments.com.

The Los Angeles Fitness Expo adult tickets, which include admittance to 15 major competitions including The Gracie US Nationals and The Gracie Kids Worlds, are $20 per day or $30 for the full weekend.  Children 12 years and under are $10 per day and children under 6 are free.  Show hours are Saturday, 9:30 AM – 6:30 PM and Sunday, 10:00 AM – 5:00 PM.  Plenty of parking is available.