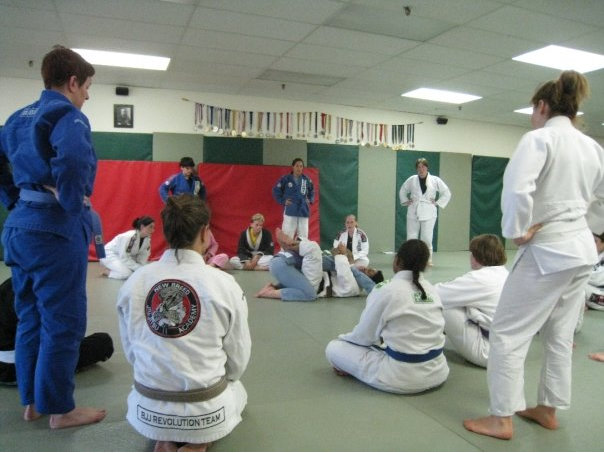 Well, it’s official. Women’s grappling has arrived. Of course it’s been around for many years, in that there have always been highly skilled, highly decorated female competitors. (For instance, Leticia Ribeiro, Leka Viera, and Luka Dias have paved—and continue to pave—the way for those of us who now contemplate their shoes and how one might fill them.) There just haven’t been very many of them. But if the 2011 Mundials of Brazilian Jiu Jitsu were any indication, that is changing—fast. Arguably, this year’s Mundials provided a snapshot of the fact that in recent years, the popularity of Brazilian jiu jitsu among women has grown by leaps and bounds. This year, the white, blue, and purple belt divisions were huge, populated with game competitors who put on a big show of heart, technique, and love for the sport. And the brown/black divisions were absolutely stacked, featuring, among other things, an open division containing upwards of 30 competitors.

And as if to put an exclamation point at the end of a long weekend full of impressive competitive performances by the fairer sex, Hannette Staack added another world title to her previous collection by busting out with a flying arm bar in her finals match that looked like it was orchestrated with ropes and pulleys. (Spider-Man: Turn Off the Dark, anyone?) But no, that was pure Staack.

The point is, women like grappling too! In ever greater numbers, whether they compete or not. And increasingly, as more women gain more experience and rise through the belt ranks, they are increasingly able to pay it forward, to give back to the grappling community through the same kind of teaching, leadership, and role modeling that their (probably mostly male) instructors gave to them. They can do this individually, through casual Facebook groups, or through more formal organizations.

One formal organization that strives to pay it forward, and to enable other women to do the same, is Women’s Grappling Camp, which is holding its next camp in Minneapolis in July (refer to http://www.womensgrappling.org for more details and to register). Main instructors Emily Kwok and Val Worthington are BJJ black belts who have worked with over 100 men and women who train, inspiring some of them to use their own powers for good in the BJJ world. For instance, after attending a WGC camp, Alliance MN brown belt Gina Franssen followed through on her goal of starting a women’s program and brought some of her students to the next camp. 50/50 BJJ purple belt Jen Flannery was already making her mark on the BJJ world through competition, teaching a women’s class and promoting grappling events and information for women on her http://www.gi3girls.com website, and the WGC events she attended gave her new contacts and readers. After attending several camps, Marcelo Garcia blue belt Lola Newsom joined WGC as an employee. And white belt Jen Argle’s WGC experience “kicked (her) desire to practice/learn BJJ into high gear,” completely quelling the concerns she had had about whether BJJ was for her.

It’s a small leap to connect “talented female grapplers” with “better overall grappling world, male and female.” So if you love grappling, remember to make room in your heart for women’s grappling too! We believe it will make the grappling world a better place—and you might finally learn that elusive detail for slapping on your own flying armbar!