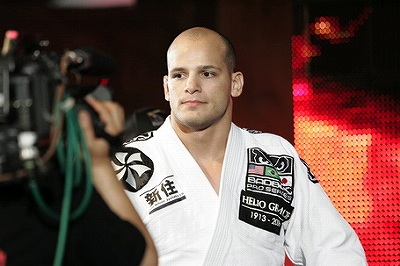 Two of the greatest Jiu-Jitsu players donate their gis and fight shorts. Xande Ribeiro & Rubens “Cobrinha” Charles have donated their gis and shorts to help Japan recover from the earthquake and resultant combo tsunami/nuclear meltdown. 100% Proceeds are going towards Japan relief aid. eBay autions are going on now. Lets bid it up people!

This gi is an BADBOY A4. It was the gi Xande wore to Sengoku 8 on May 2, 2009. Xande fought in the light heavyweight against Japan Kei Yamamiya. Ribeiro defeated Yamamiya via KO (punches) at 0:52 of the round 3.  There is a pic on bloodyelbow.com of him in the very gi. ( http://www.bloodyelbow.com/2009/5/2/862825/sengoku-Viii-in-pictures) Also notice the tribute patch to Heilo Gracie. Very nice piece of Brazilian Jiu-Jitsu culture.

This is a Keiko Raca A1 blue gi. It has patches from Cobrinha’s sponsors like Pitbull Energy Drink and Bull Terrier Fight Wear. It has Cobrinha’s school patch as well as the universally recognizable Alliance patch. Cobrinha wore this gi when he won the Worlds 2009.

Thank you Cobrinha and Xande for your generous donations. Thank you BJJ people for your bids.  Please repost!

Black Belts, Get Your IBJJF Card by 5/21