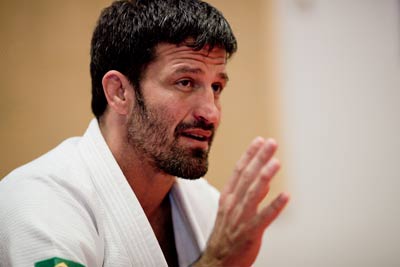 Murilo Bustamante (Rio de Janeiro, 1966) is one of the most decorated competitors and masters of Brazilian Jiu-Jitsu. As a core member of the Carlson Gracie Team, Bustamante won many titles in the sport – among which the world championships in 1999, and four Brazilian National championships. Together with Fabio Gurgel and Wallid Ismail, Bustamante was one of three BJJ stylists to successfully defend their art in the legendary bare knuckle challenge fight Desafio Jiu-Jitsu vs. Luta Livre (1991). Bustamante fought luta livre champion Marcelo Mendes, winning by technical knock out after his opponent fell out of the ring and was unable to continue.

[social][/social][einset][/einset]Blending his mastery of Brazilian Jiu Jitsu with solid wrestling and boxing skills, Bustamante also made a serious impact in Mixed Martial Arts (MMA). He became the UFC middleweight champion in 2003, and afterwards fought many tough matches in the Japanese fighting organisation Pride. He is the current leader of Brazilian Top Team. We spoke to Murilo right before his seminar at Carlson Gracie Holland, hosted by his old teammate and Carlson Gracie black belt Marcos Flexa.

DB: Tell us about your start in jiu jitsu.

MB:‘I started jiu jitsu when I was around ten years old. My two brothers Marcelo and Mauricio were already training with Carlson. They used to take me down to the academy to watch them roll – I remember being a little kid, running around and bothering everybody. When I started with the kids class I adapted really fast to the serious training, and from that day on I never stopped. It was pretty easy to learn jiu jitsu, because

I’d already been training judo since I was five years old. I don’t remember having any problems learning the art. I fell in love with the sport right away and it all came very natural to me, like riding a bike. I started to compete around the age of fourteen. In our academy this was a very natural development. Carlson used to really encourage people to go and fight in competitions. He was a very competitive person that instilled a fighting spirit in all of his students. At that time, Rio was the capital of jiu jitsu where all the strong academies were located. We used to compete against the other Gracie academies. It was Carlson Gracie going up against the rest of his family. It was time of war.’

DB: How did you get into to no-rules fighting?

MB: ‘I never had any plans about becoming a professional fighter. At that time fighting wasn’t about selling tickets, getting in front of tv cameras or being on pay-per-view. It wasn’t about money. It was just to defend our discipline and honour, and to represent jiu jitsu the best we could. The challenge fight against the lute livre representatives was my first experience fighting vale tudo (‘anything goes’). It was just a challenge between disciplines. The luta livre fighters challenged jiu jitsu. And since I was one of the best black belts in Carlson’s team, and I had been competing at the top level and in the open class divisions, it was clear that I should be there to represent the style. I put my name on the line. We had these challenge fights before, but they were mostly done inside the academy. I trained really hard for that challenge fight. A lot of people don’t know this, but at Carlson’s we always did a lot of training without the gi, long before the rise of ADCC. We would spar without gloves and used open hand slaps to the face and body – just to learn how to protect your face and getting used to the punches. And we added wrestling takedowns to our jiu jitsu game. It was a friendly environment, but with very tough training because nobody wanted to lose.’

MB: ‘Carlson always taught us this tournament strategy: get the takedown, pass the guard, and then squeeze the life out of the guy. And that’s what we did: we went to the competitions to squeeze people. I guess that makes for a good foundation to fight in mixed martial arts. We were trained to be aggressive and always fight for the top position. To take the gi off and to adapt from sport BJJ to MMA wasn’t difficult. I got lucky, because in my opinion Carlson was the best master of his time. He had learned the art from his uncle Hélio and his father Carlos, and through many years of hard training Carlson created his own style, well suited to fight in vale tudo matches. He taught me the basics, and he always encouraged me to practice boxing, which obviously helps a lot in MMA. Boxing helps to get the right timing to block, enter the clinch, and to take the opponent down. Most importantly it toughens you up. You learn how to give and how to receive punches. Some people don’t know this, but Carlson had an amazing guard himself, with a solid training system of connected moves. There were many guys in the team with fantastic guards like Ricardo de la Riva or Cassio Cardoso. Everyone in our team has a really good, fast armbar from the guard. Our competition style was the top game, but in the academy we played a lot of guard and developed a lot of positions from there. I learned a lot from Carlson, but over the years I created my own style. After years of training and fighting, every fighter discovers his own personal style. After I left the Carlson academy in 2000 to form Brazilian Top Team, I created my own system to teach MMA: adding small details here and there and connecting positions that worked well for me.’

[einset][/einset]DB: Can you describe your own style?

MB: ‘All my life I have been focused on applying the techniques with the least amount of required strength. MMA is a different combat sport than jiu jitsu. But in order to be successful in MMA, you have to know how to apply the principles of jiu jitsu. It’s not just about the individual techniques. My foundation was that had a great coach in Carlson, and that I competed a lot. I think I started cross-training a bit earlier that most of the other people in MMA. Around 2001 learned a lot of fantastic details from my former wrestling coach Darryl Gholar, who we brought over to Brazil to teach at Brazilian Top Team. Gholar really helped me to fight against good wrestlers, and he taught me specific strategies to take them down. I learned a lot from him, he’s a great coach. But all my cross-training was based around finding ways to successfully apply the principles of jiu jitsu. Everything I learned was to help me get the fight to the ground, so I could use my main weapon. But by doing this, at the same time I got pretty good on my feet. So when I won the middleweight belt at UFC 35, I won by knock out. I always try to prepare myself to fight everywhere. My style is about being unpredictable and trying to confuse my opponents. Like when I fought Chuck Liddell. Whenever he thought I was going to punch him, I took him down. When he thought I was going to take him down, I punched him. As a fighter, it’s very important to always keep your real intentions hidden.’

DB: Is that how you stay calm in the chaos of a fight?

MB:‘Yes. You have to keep your opponent guessing, and then it’s easy to adapt to whatever happens. Whenever they get a change, I encourage my fighters to aggressively go after the submission and hold it. Not to intentionally hurt the opponent, but just long enough so

the referee can step in and stop the fight. That’s his job. I’ve seen it happen before when a person taps out, and then claims that he didn’t. Just like in my fight with Matt Lindland. Those things can happen, and you have to be ready. Recently my student Rousimar ‘Toquinho’Palhares got into trouble for holding the heel hook past the point of tap out. But in my opinion the referee was too far away from the fighters to stop the action in time. He took too long to intervene. But I realize it’s a difficult job, because a ref needs to be close enough to jump in, but far enough not to bother the fighters. Crazy things can happen in fights. Like when I fought Quinton ‘Rampage’ Jackson I almost caught him twice. He turned and escaped my armbar really well, but my quillotine attack was really close. Then, he tried to jump out of the ring and I got into a position where I couldn’t squeeze any more – so I had to let go and go to the top. And then the referee stopped the fight to help him to tie his shorts. But I have nothing to complain. Looking back I’m still very happy with my performance, because I came in on a five-day notice. That’s crazy when you think of it. I’ve always been the kind of person that likes challenges.’

MB: “Never stop learning. That’s the most important lesson in jiu jitsu. Everything you learn, try to apply perfectly, with the least amount of strength. But first you have to willing to live and learn every day.”